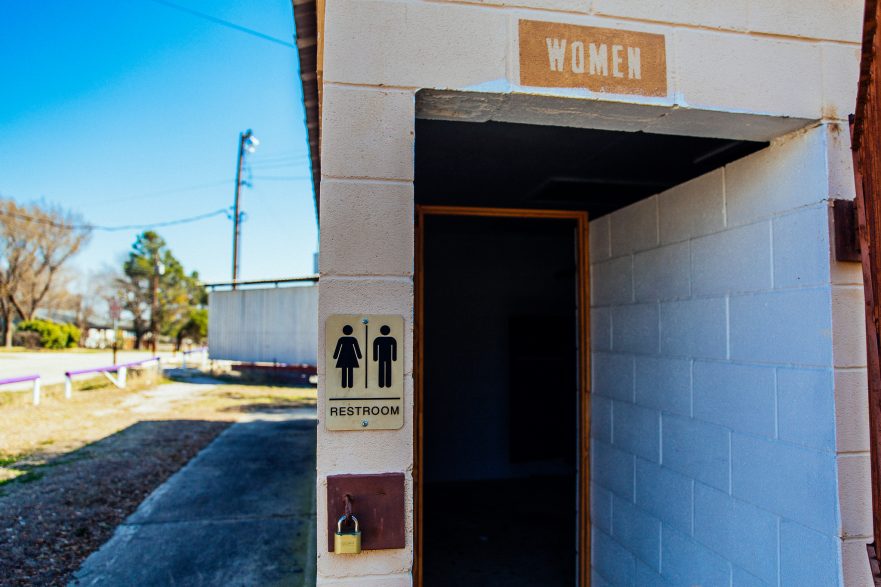 photo "Knock Before Entering, Wipe Before Leaving" by Tyler Malone aka The Second Shooter

You know exactly what it feels like when you really need to pee. And you can’t get to a bathroom fast enough.

I have found myself in that situation far too many times. But the time that was perhaps the worst was when I arrived at a crowded party, headed right to the bathroom, and found a line of five or six people ahead of me.

A kind soul directed me to go through the kitchen where I would find another bathroom. I pushed my way through the throng, hoping that I’d find it and that it would be unoccupied. As I flung open the kitchen door, I saw a woman about to take a gulp from a bottle containing a yellow liquid.

She looked at me with apparent curiosity.

“Apple juice. Why do you ask?”

“Yes, just go through the maid’s room and you’ll see it.”

I rushed to the bathroom, and joyfully relieved myself. When I came out, she was still in the kitchen, sipping from the bottle. She smiled at me.

“I think we just had a Kodak moment, but we would have needed a caption,” she said.

“Well, I’m glad if I was of some assistance.”

“Well, you know. You did have a Plan B.” And she held out the bottle.

Now we were both laughing.

I hesitated. “Well, my nickname’s Tiny.”

“Oh, I get it. If you were really tiny, no one would call you that.”

“No, then I’d probably be Stretch.

“So what’s your real name?”

“Well, Seth, why don’t you try one of my deviled eggs?”

I then noticed that she was wearing a white blouse and black slacks. She must be working for the caterer.

So I picked one and tasted it.

She put her arms around me, placed her tongue in my mouth, and we began to make out. In no time I had a massive erection. She led me into the maid’s room, locked the door, and we picked up from where we had left off.

She unzipped me and took my cock in her hand. I had my hand between her legs. She murmured: “You are certainly not tiny.”

Just then, someone was banging on the door, and yelling “Emergency! Emergency! Yuh gotta let me in!”

Adrianna seemed kind of disappointed, but I am nothing if not an empathetic person. Very reluctantly, Adrianna unlocked the door and this frantic woman rushed by us.

“You want to wait till she comes out of the bathroom?”

“No, silly! Let’s continue this at the end of the party. I live just a few blocks from here.”

“It’s going to be tough to wait that long.”

“Yeah, tell me about it! But in the meantime, I’ve gotta go back to work.”

It was going to be hard for me to get through the rest of the party. All I could do was think about Adrianna. She came out of the kitchen a few times to bring out food, pick up empty glasses, and even joke around with people she knew. But each time our eyes would meet, and each of us knew exactly what the other was thinking.

A couple of times I went into the kitchen. We would kiss, and then I’d stroll back out into the party as if nothing had happened.

I knew it wouldn’t be too smart to spend much time talking to any of the women. So even though it was a singles party, I hung out either with guys or groups of people.

I wondered if working for a caterer was just a gig, or if it was her full-time career. I wondered what she wanted out of life, and if she was happy.

I also wondered if she was as attracted to me as I was to her, or if we were going to be just a one-night stand.

The party started to wind down. Adrianna had begun cleaning up, so I decided to help her. I could see that I was winning points, but I really didn’t want her to have to do everything by herself.

Soon the last people were leaving. I went into the kitchen to check on when we could cut out. But she must have been somewhere else in the apartment. I was sure she wouldn’t have left without me.

I went from room to room but the place seemed to be empty. I went back to the kitchen. The door to the maid’s room was shut. I figured that she was probably using the bathroom. So I sat down at the kitchen table and found myself staring at the half empty bottle of apple juice.

I began to smile. When she came into the kitchen, I would hold up the bottle to salute her.

Then I thought I heard noises coming from the maid’s room. I walked to the door. The noises grew louder.

I tried to open the door, but it was locked.

After I pressed my ear against the door, I crept out of the kitchen and let myself out of the apartment.

What we want may not want us. No one wants to live like that, but that’s how life wants us to live. ~ tyler malone