Of course I couldn’t find my sunglasses on what turned out to be the most blinding day of the year, also known as the day Jeff and Ally got married.

“It’s rude to wear sunglasses to a wedding,” my own wife reminded me, hand on hip, watching as I lifted everything but the refrigerator in my quest.

“According to who, the God of weddings? Screw him, he’s probably a prick like all the other gods. Are you not going to help me look? They’re LaCroix.”

“We don’t have the time. Worst comes to worst, the maids will find them.”

Jeff’s been a solid friend since grade eight, but I couldn’t think of anything else besides the mystery location of my not cheap sunglasses from the time we approached the club to the time I joined Teddy at the designated smoking area. Engaging in such reprobate behavior on such a sacred day helped blow some of the bubbles away from my guts.

Other than the stars of the show and Teddy, I recognized three other faces, and half of a fourth. The champagne tasted fine, the coconut shrimp was mom slappingly good, and one of the bridesmaids will substitute nicely for my wife in at least the next week ahead. But my sunglasses, my LaCroixs, my high-end shades, were unaccounted for.

“Jeff? You know he is. You remember the guy who shot all those people in Texas? From the tower? After the cops shot him, they found his dolly with all these weapons and provisions. He was ready for war, basically. That would be Jeff. If he ever snapped, he wouldn’t just get a gun and start blasting people. He’d go in with a plan.”

“I’m serious. Once you marry a woman, her whole text switches. Same language, but verbs turn into nouns, nouns turn into adjectives, and so on.”

Teddy’s got all the humor of a Secret Service Agent who just found out his mother died, yet he hit upon a fact of life that, if faced by more people, would drastically reduce the marriage rate (to say nothing of the divorce rate).

Sure, the poets like to say that marriage is a commingling of souls. Now, I’ll never deny such stuff happens. But, two people don’t need to fit together perfectly. They just need to fit.

As I paid my respects to the happy couple I wondered how long they’ll have before Ally begins ruining an already-unimpressive figure. I wondered how much longer before nosy aunts from either side finally stop badgering my wife and I about children.

I wondered where in the hell my sunglasses are.

Would be nice to attend one wedding with a standing audience and a seated bride and groom. Just for the novelty.

I remember my wedding every time I drive by the circuit courthouse, in fact. Wow but did her father want to kill me slow. Nearly loves me now, though. (I’m the only one of four sons-in-law willing to watch an entire football game with him, see.)

While my Cara is off gossiping, I keep a fair eye on our Vicky. There aren’t many kids in attendance, so she’s content to play on her phone–at least until I confiscate it, explaining that it wouldn’t hurt her to go for a walk on such a gorgeous day.

Such a pretty thing; not that little. Big enough.

We’re a happy couple. We’re happy for the other happy couple, without whom we would have spent that stupidly sunny Saturday watching old movies in a darkened room, instead of sweating like whores in a southwest Texas brothel.

I was debating whether or not to approach the roast beef table when I saw my niece walking circles around a tree, eyes downcast, hands tugging the hem of her dress. The aimless journey ended when I walked over to her. Her look didn’t give much away, but when she returned my greeting, I realized she’d been crying. I thought I knew why, yet didn’t know why, and that irritated me a little.

Usually Brittany is chipper and vibrant, blessed with that eagerness which is easily mistaken for innocence in a child. Her blonde hair, blue eyes, and barely-there nose could be coaxed into a pageant-winning look; thankfully, her parents aren’t that desperate/thoughtless/evil.

“You look like there’s twelve other places you’d rather be,” I said, remembering to smile. She looked directly at me, lips twitching. Her hands had gone from pulling to pressing.

Whatever I expected, hoped, to see in her expression was not there. My certainty in the cause of her discomfort grew, outpacing even the acceleration of my heartbeat.

So pitiful. I longed to hug her, yet knew such a gesture was less what she needed than what I needed. I took a half step closer and extended my right hand until it enclosed hers. I gave a gentle squeeze, smiling again, this time with my eyes.

“I can tell something’s upset you, honey. Where’s your mom and dad?”

Her silent pleading might have convinced me, on another day, to walk away. One day, in fact, it did.

I took a long, uneven breath, trying to imagine the caterer’s reaction when I asked for his carving knife.

“What’s going on, Dave? If you want a daughter that badly, take it up with my sister.” The coarse semi-shout of my brother-in-law snapped me from my potentially homicidal reverie. My own nervous laughter was drowned out by the series of barks he used to conveyed amusement.

If life doesn’t kill you, love will. Don’t look into the shadows, see what’s in the light right next to us. That’s what you should fear. – tyler malone 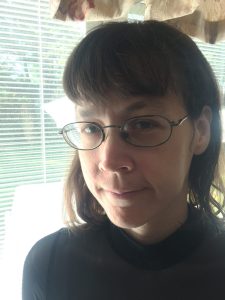 A bit about Jennifer: Jennifer Benningfield is a lifelong Marylander who has been in the (mostly) benevolent thrall of words since receiving "Green Eggs and Ham" as a birthday present. She's currently working on her first novel.