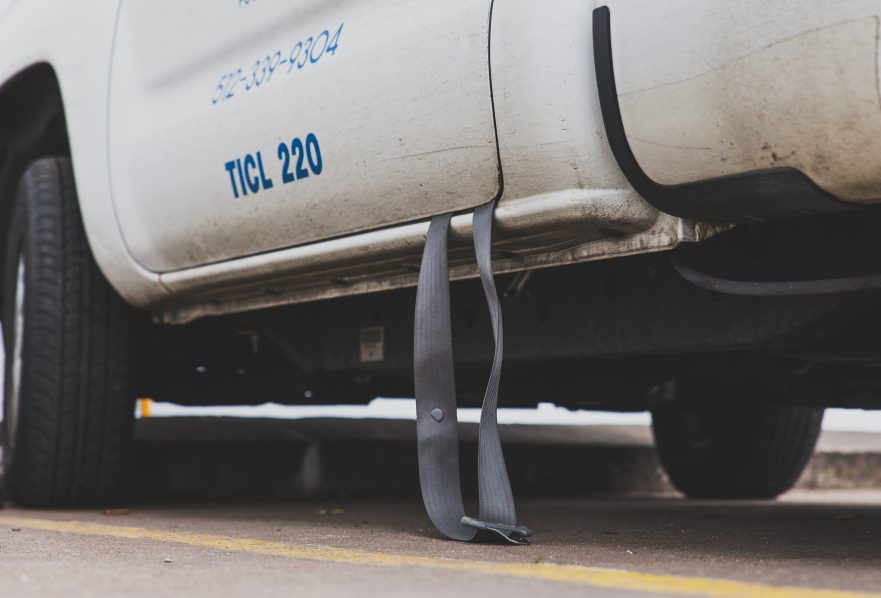 photo "Click It" (above) by Tyler Malone aka The Second Shooter

Griffin liked to arrive early enough to cruise by the parking lot until a 15-minutes-only space opened. There, he would sit in the car for half an hour, rearview mirror tilted at the coffee shop. The seat belt could be undone in an instant, but first impressions couldn’t.

He’d know her when she arrived, but the women rarely embodied their posted pictures. On the screen, they seemed younger, thinner or prettier. Griffin’s photo was dead-on, updated each time he braved the dating website. He was all about actuality and had grown a goatee since the last time. He hoped the weight of thick, golden hair at the bottom of his face would balance the moussed haystack tufting the top. Griffin tolerated the in-between: a long, thin nose, drawn cheeks and thick-lensed glasses.

The last time he met here for coffee, his date, Angela, joked and called him a beatnik. Griffin couldn’t guess if such an outdated term was an insult or not. Angela said not; said the way he dressed was kind of cute with those old, square, black-framed glasses. “A blond beatnik,” she clarified, “In a good way, I mean,” and went on to suggest the only thing missing from the caricature was a goatee.

Griffin thought about changing his style of glasses but why bother. His long-distance vision was perfect with this prescription so why mess with it. Before Angela came Ronnie, back when he didn’t have the menu memorized. Griffin had to ditch the glasses to read and when he did, Ronnie had been startled by the real size of his eyes. She said they were more in proportion when he wore glasses, smaller looking, downsized behind thick lenses. Without glasses his eyes were huge blue saucers.

He checked himself in the mirror, made sure the specs were perfectly horizontal on his face. Griffin spied someone in the reflection, strolling up to the entrance. She seemed regular, maybe slightly heavier than expected. His date described herself as a petite Japanese-American. It was hard to tell in profile, features curtained by long, black hair. Griffin flipped on the rear window defogger for a clearer view, waiting for her to turn around.

He needed something to do with his hands and his hopes, so Griffin unbuckled his seat belt. He adjusted the mirror a micron.

She was reading the menu on the door. If this was Kimm, it was like she was deciding if the food was good enough compensation should the date go bad. Or maybe she was looking at prices because her email declared they’d go Dutch. This was the part he hated: having to act all casual, trying to identify a perfect stranger rendered unblemished by Photoshop, those first minutes when the only conversation starters were the stretched truths in her bio. He hated it more when she waited outside, as if there was still an opportunity to cut-and-run when she finally spotted him.

Griffin sighed, relieved when another woman entered the mirror. The one with black hair turned to embrace the newcomer. Under the well-lit portico, neither looked remotely Asian.

Three dates ago, Suzanne let Griffin call her for a follow-up. They met where she worked, at one of those franchised haircut places. She wanted to style his hair before they went to dinner and she insisted on the mousse. Suzanne said she’d trade the cut if Griffin paid for dinner. Although she complimented his new look and said it really fit his face, by the end of dinner she got an emergency phone call and had to leave early.

Griffin checked the clock on the dash and decided to wait a few more minutes. He hated being late, but disliked arriving first even more.

He heard the faint, mechanical whine of an automatic window from the passenger side of the car next to his. There she was, in the driver’s seat, her mouth shaping his name. Griffin down-buttoned his own window and a clear sheet of air replaced the haze of glass. Kimm had a cute little grin, just like her picture.

“Can you give me a minute to find a place to park?” Griffin called, “Might get a ticket here.”

Griffin pushed his glasses tight to the bridge of his nose and started the car. The small lot was packed, so he searched the street for parking. A chime reminded him to buckle up.

When we wonder what we’ve become, the next thought will be when will we be become more, then it becomes the last breath that we take. – tyler malone

A bit about DL: My writing appears in over 20 publications, including Page & Spine, Zetetic and Every Day Fiction. But enough about me, unless you want to check out dlshirey.com or @dlshirey on Twitter.