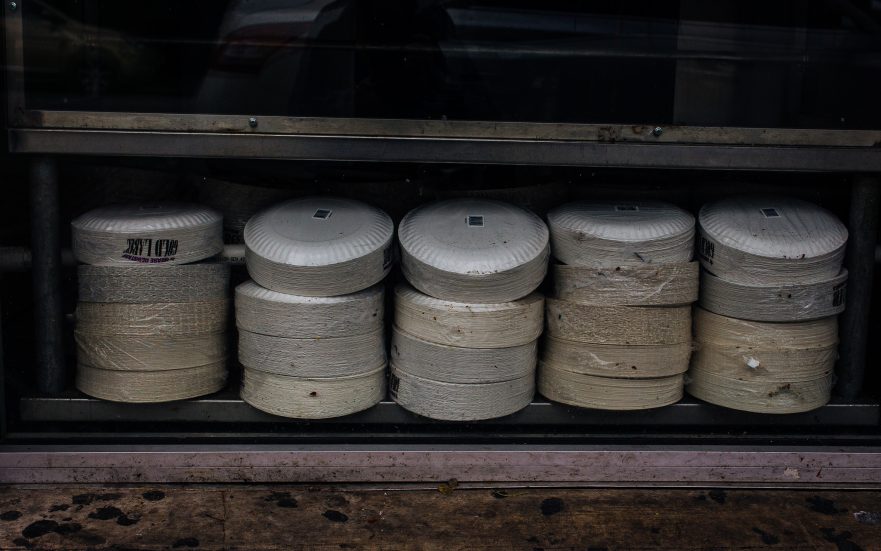 photo "Paper Wares" by Tyler Malone aka The Second Shooter

Peter had no sense how to dress for this occasion, so he dressed for a fancy restaurant. He went in his best suit, a suit of multi-use charcoal cotton, for the showing of the psychic wares of Patricia Styles. He reflected he intended to wear the suit on the day of his brother’s imminent funeral, the funeral of Henry Styles. He had bought the suit especially for a friend’s wedding, had bought it with dual use in mind, knowing without wanting to know that he would soon enough have to appear at his brother’s funeral, because Henry was terminally ill and quite visibly dying a slow but sure bed-ridden death. Henry, reduced as on a high heat, was flat on his back in his over-spacious queen bed at the bitter close of his personal existence.

Peter visited only once a year during his brother’s death phase, two years running, owing to the fact that they lived in different states and air travel, even cheap domestic air travel, was something of a financial hurdle for him, living as he did check to check as a host of trivia nights at two bars, indistinct from one another, that served prohibitively priced beer.

Travel was of course a physical impossibility for Henry who was all the time caught up in the once in a lifetime private act of just dying. Everything about his body was being depleted and, cruelly, his taste buds were taken away first. Peter, devoted brother, intended to give him a few items from the psychic life of Patricia Styles as the going away present of going away presents, something that the old restaurateur might enjoy, lying flat on his back, before his ultimate shuteye.

Peter was couth enough not to show any signs of excitement about this selfless act of giving when he saw his other brother, Gilles Styles, who was married to Patricia, when he finally arrived at the house to view the goods. Gilles was having his own minor unselfing that weekend due to the emotional cocktail of shock, resentment, and envy brought on by Patricia’s listing of her psychic wares on the net.

Patricia had the option to list her psychic life whole, mint in sealed box (MISB). But cleverly, with a bit of research, she had opted to subdivide her wares into categories for individual sale: thoughts about vegetables, thoughts about cooked meats, perceptions of vegetables, perceptions of cooked meats, big ideas on rice, fantasized cuisine, memories of eating, stored knowledge of recipes and palette structures, dishes steeped in personally romantic association, fears of food, childhood food allergies, violent motives behind eating and not eating, unacceptable food urges, irrational consumptions (cakes), repressed wishes against food sharing, fish trauma, pie desire, taboo snacks. You could scroll on and on.

Individual bidding was to begin at ninety-nine cents. This was an upsettingly low amount for Gilles who over-valued everything about his dear wife. But Patricia had insisted that that was the way to get the high bids, to sell individual pieces and pitch players against each other as early as possible in the game. This way, she predicted, bidders would be forced into egoistic battle with one another and her stock would rise and rise, ruling Gilles and his brother definitively out of the market.

This gave Gilles a sudden and hard hurt, not unlike a stabbing. He had left the kitchen without saying anything. He had put on his overalls, which indicated that he would be, from now on, committed to the garden. He had gone off on his dark weekend to pull out weeds, move dirt around, clip, and water the grasses, of which many varieties of these last he had planted, but to the casual observer just looked like a plain old lawn.

Peter arrived at the house where Gilles and Patricia lived as husband and wife and found the former, unusually bearded and withdrawn, watering the grasses in the front garden with a long hose. The pressure of which was unimpressive, and he kept putting his thumb to the spout to make it spray a burst of localised artificial rain every now and then. It was about the most expression he was capable of under the circumstances, knowing that by weekend’s end his one-time viral food blogger wife would be without his most cherished of her psychic wares, the things that made her unmistakably her.

The front door was open wide in the manner of realty for viewing, or domestic emergencies. Peter paused on the neat concrete path leading to the house and Gilles looked up, the spray creating a microscopic rainbow by the man’s overall-clad side.

Peter stepped into the house, where the goods were displayed rather ad hoc on a bookshelf repurposed for the occasion. As he passed from item to item something squished under his patent leather-clad foot. It was dishes steeped in personally romantic association.

“Oh well,” he thought, “I probably would have bought that anyway.”

He examined it in his hands and found it would do as a gift to his dying brother.

Dine with the death daily. But beware, you won’t ever lose your appetite and they’ll grow only hungrier. ~ tyler malone