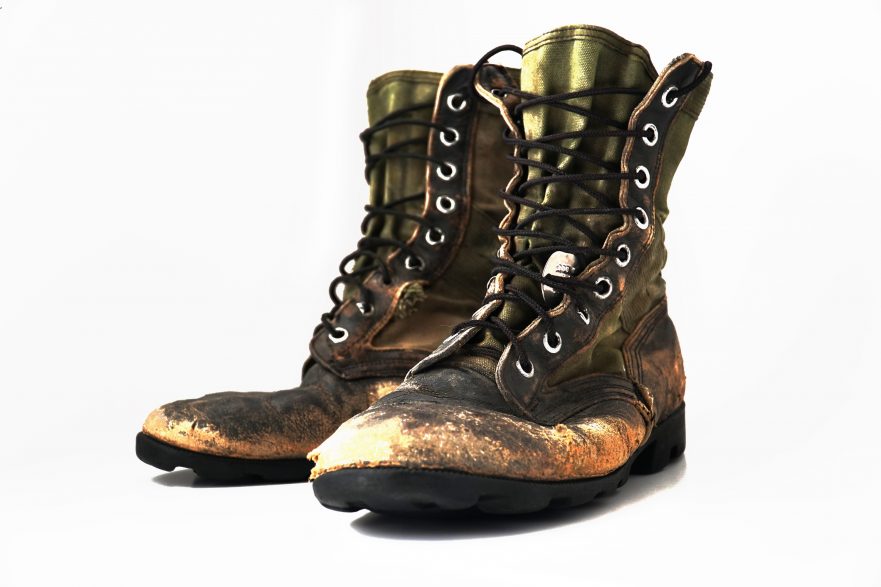 If these well-worn, war-torn, badly sand beaten, sad looking field boots had a voice, the tales they would tell of scenes they had seen when they once enveloped this grunt’s feet.

As I pulled these battered boots from an old forgotten box of Marine Corps memorabilia that I was sifting thru, this duo spoke to me and presented the keys to memories long ago locked up and put away for a day I didn’t think was going to come this soon. But they came in rapid-fire succession as I reflected, reminisced; replayed scenes that we, me and my old field boots, dealt with in our times together.

In August of ‘90 I was 19 & I was just as pristine as my new boots. I thought I’d seen my share in my years and knew what it meant to be a Marine. I even considered myself an “old salt” what with all of my 16 months in the Fleet Marine Force. But me and my boots, we were about to be put to the test, pushed to our limits and ultimately return from it all a little bit war-torn & very well worn.

When we first bonded, they were much more clean and pristine than they ended up being the day they retired from my feet when the 7th Marines made our final escape from the sandbox in ‘91. They were brand spanking new olive drab jungle boots that hardly matched the crisp and clean desert cammie BDUs they issued us Marines the day before we departed for Saudi. Not sure if it was before or after we filled out our living wills or got us a new batch of exotic experimental vaccines or quickly studied our enemies’ strategies and preferred means for defeating and deleting us infidels. But I digress…

When 1/7 landed in the Saudi Gulf, the greeting we had was a wall of insane heat and intense humidity. It truly was the hellhole we were warned it would be. We touched down at the international airport and quickly loaded onto cattle cars and whisked away to the port to unload the MPS ships with everything a regiment of Marines needed to fend off a million-man Iraqi Army from crossing the Kuwait/Saudi Arabia border. Me and my new boots, we knew we’d be doomed if that were to happen at that time, in that place, but we were brave anyway.

Marines have built a reputation for fiercely fighting and winning, despite the odds. The warriors of the “First Team” were not going to let our beloved Corps down by losing any battle, even if the odds were 1,500 to 1,000,000. We just needed to make sure we had a supple amount of ammo (check), a week’s supply of MREs (check) and the rightly tightened boots upon our feet (check and check). Tags taped with a third one tongue tucked and carefully laced up close to my feet just in case I got blownt up. Yep. Chew on that one for a minute…

We fell into rank, precision in our decision as we dressed right dress, shuffled our heels and snapped to atten-hut! We double-timed when ordered to; kicked out long and wide when riding the Trak. We trekked many of miles while walking desolated desert scenes, patrolling for the sake of killing time and staying sharp. We got filled to the gills with sand along the way, caked and thick with it until we got us some “rear with the gear” relief every month or so when the Suck would deem us fit for a flattened mattress, a real shower, hot chow and a required shoddy layer of boot polish to keep the brass off our asses. We killed our share of shitbugs, trapping them in the front sole of our toe to whack the other against it and splat! shitbug no more. We got blasted with sand, weathering our skins, worn down so thin, revealing the tenderness within. We sat for countless hours playing Spades and Hearts and reading letters and writing back. We impatiently waited for something to happen that would ultimately get us back home. We swallowed our fears when the word finally came that the Shield had become a Storm. We wrote what we thought might be our last letters to our loved ones. We awoke in the middle of that last night and walked off the uneasy dreaming feeling. We loaded up predawn and crossed over the border into an unknown fate.

We saw nightmare scenes of blackened landscapes charred with oil and blood, disfigured bodies of melted enemies whose peddle to the metal wasn’t fast enough to outrun the fury from above. We donned our gas masks & quickly MOPP’d up when the call of “Gas! Gas! Gas!” came down the line. We stormed the airport, stole back the country’s only city thru orchard battles with their toughest troops, and sorted thru the nitty gritty only to open our lines up to let the Saudis claim victory. We warmly welcomed Kuwaiti city folk as they crossed our defense lines to give us hugs and their country’s colors. We were told to stop right there, that we did our jobs and Saddam would live to see another day. We were slow-shuffled back Stateside and welcomed home as heroes from our Nation’s citizens who had a heaping pile of stinking guilt from that jungle war that came before. Yep, me and my boots, we were mighty proud to have served. We did what we were designed to do when the time came to prove our worth.

I’m not going to say that the things me and my field boots did and seen were as sad and horrendous as what other warriors and their battle boots endured before and after me. After all, it was the swiftest victory our country has ever seen, not to mention, all on their TV’s. But the scenes they didn’t show on headline newsfeeds is the bond between this grunt and those well-worn, war-torn, badly sand beaten, sad looking field boots.

The things we carry carry us, leaving the lucky to be buried with their boots on, to carry on life’s wars, life’s victories, life lived. – tyler malone