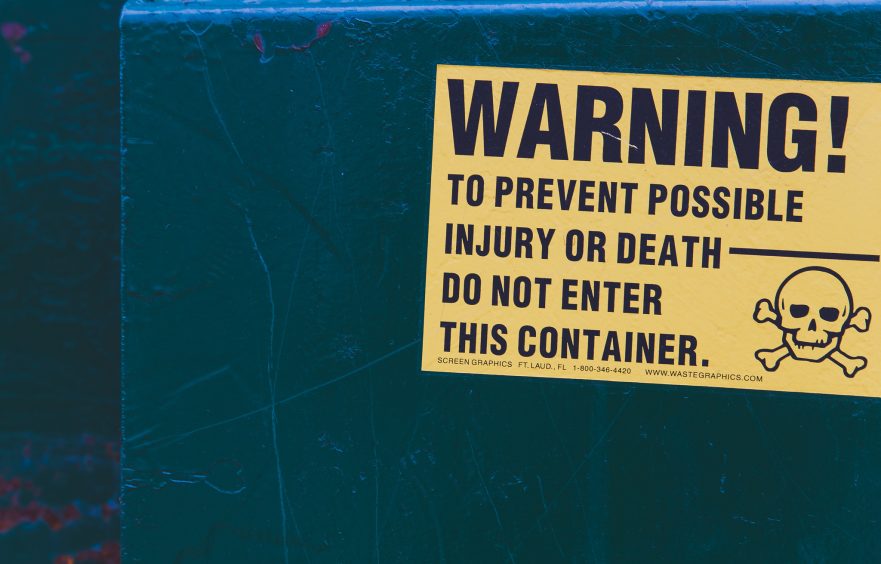 photo "Achtung!" (above) by Tyler Malone aka The Second Shooter

The sandwich shop sneeze guard is layered with disgust, a windshield driven through a locust plague. Braelynn leaves the stack of hardening foot-long shells of bread to clean the circular common patio table of ladies who arrived fifteen minutes until closing time in a Baptist shuttle to order twelve six inch tuna sandwiches. No chips, diet Pepsis. Across the floor, Braelynn’s ankles mush and crack, the sounds of snakes on soggy mud around farmyard feeding tanks.

Shuttle headlights idly ignite thin curls of the ladies and blossomed sandwich wrappers while Braelynn searches for her right kneecap. It’s there, a digging icepick tells her it exists, same as heartache tells her she once knew what it was for someone else to touch her. Braelynn’s body never mends, never moves on. Moving from the sidewalk drop to the patio, all the bones stinging makes Braelynn mumble unholy short words. Light creeps through aged hair like smoke rising from pasty skulls on a cold night, but this is summer and air doesn’t move congregated perfume mixed with garlic and banana peppers uneaten by false teeth, dried but saved from discolored tongues. All have their cloudless eyes on Braelynn as she grabs sandwich wrappings cradling iceberg lettuce and heels of caloric rich buns. The icepick digs deeper in a knee swelling as skin melts into hot denim. Braelynn wants to puke. Pain, perfume, the souring sandwich vegetables. She’d have to clean up the mess, though, and Braelynn has never puked. All that’s happened, all life’s agonies, she’s kept inside, never purged.

A woman with the posture of a beaten pumpkin asks, “Dear, are you in pain?”

Braelynn nods, hoping to dump the trash and go back inside, lock the doors, and sit in the walk-in cooler.

“Dear, do you live in pain?” All twelve women share the questioner’s gaze. They lean towards the answer as Braelynn’s body suffers its own weight, as if an extra corpse is under the skin.

From the far side of the circular outdoor table, Braelynn hears, “For many, all time is pain. It’s how time passes, the only measurement.” The woman stands. All women lift their heads quicker than Braelynn can as she picks up garbage. Passing by as easily as summer passion, the woman continues, “Healing is all that matters.”

Braelynn traces the patio, finding old faces in the light forcing itself through restaurant glass and headlights. “I can’t pay for anything.”

“Liberation doesn’t cost anything. No medicine, no new addictions or problems. Dear, only the young are saved. But still, they’re never, ever safe from experience. No, right now, you need to save yourself. Come with us.”

The Baptist shuttle is as silent as prayers from martyred saints but illuminates face wrinkles devoid of any winces of pain, only concern for Braelynn.

Her response is the door latched. Locked. Still wearing her sandwich smock, Braelynn sits in the back of the shuttle, far from being able to see who’s driving as they sit in silence. Nervously, as the group escapes small town plaza light, Braelynn says to no one, “That job is a pain. Just last week, during the first real summer heat blast, the walk-in freezer went out overnight. All the dye from the meat oozed out of the deli slices. When I opened the door, a rush of meat juice dye ran up to my ankles.”

Free from any light, harsh, rusty vocal chords says, “Jobs make life worth living, even the bad ones. We can’t and won’t fix that for you. Your real pain, we’ll help abolish. To define pain is to limit suffering, and you can’t even describe how you feel, only complain about work, work that’s a blessing for the living, which is why pain is something you should be freed of.”

Braelynn hands squeeze at the skin wrapping over her thighs. She grips but can’t feel bone.

In darkness, the shuttle passes trailer parks, summertime elementary schools still wearing math’s stink. Braelynn looks for the lady trying to save her but all faces are dark. No one looks at phones or each other or at her as the shuttle slows in front of a cotton gin, a corrugated castle leftover from when progressing railroad whistles broke cricket songs.

The ladies shuffle from the bus at the speed of a family leaving an infant’s funeral. Braelynn sits in the dark as she hears, “Come, dear,” from the night’s most familiar voice.

Down shuttle steps, each drop sends nails into her spine. The group embraces her, utters comforts as their procession leads into the gin securing all sound inside its metal hull. The weight of walls muffles ears the women journey into the windowless abyss only illuminated by candles and a solo floodlight on the dirt. Someone, something small is in the light amid tools: hammers, axes, saws, all placed inwardly towards the light’s focus. A ritual pointing towards life.

“All that exists here is deprivation,” welcomes the leader.

It stops the pain is all that’s said before the metal world echoes whimpers coming from the spotlight’s figure. Young confused cries. Caressing, the leader puts crooked hands on the bound body’s frail wrist and says, “Hush, sweetest, dearest baby.”

Gagging on something between teeth, a young girl’s voice says, “Grandma—?” before half a concrete brick smashes into the side of the trash bag over her head. It sags with gore. Tools in hand, the march of women pushes Braelynn towards the light. They begin the breaking at the ankles. Amid recitations of slow breathing gushes as prayers, not much whimpers as the group moves up to the young knees caving inwards. There’s no forgiveness, only redemption as Braelynn swings jagged rebar. Her shoulder’s motions are liberated as dark liquid runs over
dirt and seeps towards her feet. Braelynn’s not falling, she floats as the infinite arrives.

This benevolent ladies’ auxiliary abounds with grace and sharp knives; their blessed abattoir bequeaths relief. From them, no pain is gain. ~ mh clay