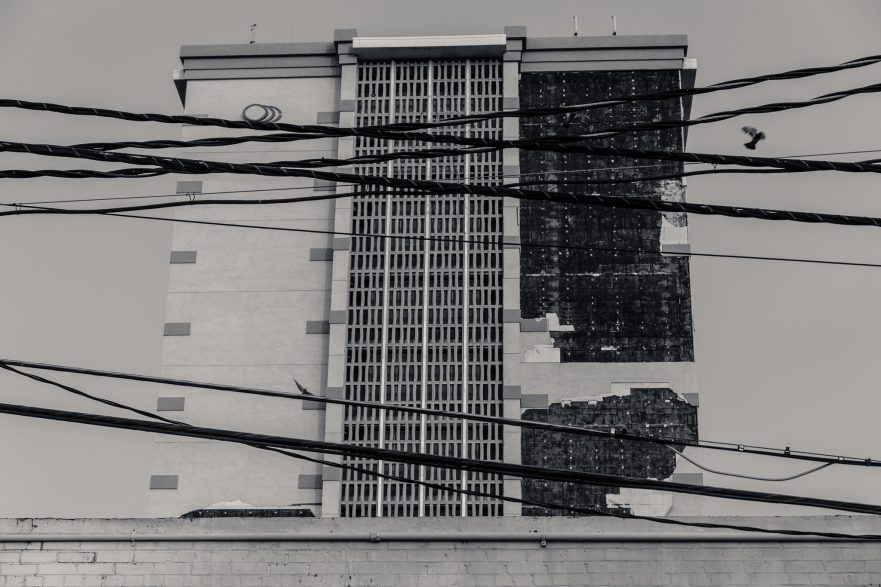 photo "Build Ourselves, Destroy Ourselves" by Tyler Malone aka The Second Shooter

The excitement of the new project had begun to fade away. Adventure became regular in face. My enthusiasm level was at five then, not completely worn off but I was in need of a caffeine shot to wake up from the drowsy non-happening routine. I had already been to all the markets and captured culture on a reel. The initial terror of being in a slight war zone area had also withered down the scale- mercury didn’t shoot up when I heard the local clamour. The neighbours had accepted me, though I still felt out of place. I was hesitant to ask them to lower their voices. I didn’t ask the landlord to provide me with darker, heavier curtains, I got them done on my own. I realised that it is not my home and that people will not be aware of my preferences: silence and darkness.

I had to be there for another seven days. I lay crouched on my bed making a list of farewell gifts. I made a couple of new friends. I have been a fan of goodbye gifts so that if it is the last time to see a person, along with their glistening eyes, even their smile that hides unuttered emotions is captured in my eyes.

I remember waking up from this dreamy patch in a frenzy. My parents were trying to FaceTime me and my laptop went on. I got a little scared, to be very honest. Such loud notification noise and laptop vomiting light in the otherwise candle lit room. The fright of being in such a place never leaves one’s body, I suppose. They couldn’t connect for the longest time and then I lost hope and energy to try a millionth time. They left me a message instead, to which I couldn’t reply. They saw a news clip of a possible attack or community war and wanted me to shut myself up. I should have been updated by the police or by my company. So I got up yet again and walked to my window to look down the street. The breeze was cold and unusually silent. The lamp posts had been switched off. I could see a few shadows. This pinched me a little.

I had been in this city for two months now. No terror activities. I was told that my love for darkness would turn to hatred for it. No one looked suspicious to me. In fact, I was surprised and it jerked my sensibilities to find such beautiful humans. I had learned and trained myself to expect the opposite all my life. What I saw seemed to defy every report I read and every clip I saw and every picture I looked at. This couldn’t have been a war zone. And I was proud to be taking back such immense pleasure in my heart and calm stories in my files.

I was about to resume my agenda list when I heard a deafening noise. The building shivered, it was so loud. I quickly kept a glass on the floor. I guess, more than knowing, I hoped that it was just an earthquake. Human mind is so fickle. Loss caused could be as severe as a blast but it still seemed like a better wish in that moment.

Another blast. That was closer. Shut windows didn’t do a great job of cutting out on voices. The murmur turned noise was even more terrifying because I didn’t know what to make of it, how to comprehend this panic stricken language. I quickly reached out for my phone to inform somebody. But the network had been cut. A pang of terror hit my nerves.

After 1800 seconds, another blast. It punctured my ear drum but I wasn’t yet deaf. I had to go through the pain of listening people cry for help and their agony. I had to listen to my teeth clattering. I still listened to all that before falling asleep. I was glad that I was sitting in the dark. Light meant fire, torchlights, blasts. Light meant human life—which I feared. I didn’t want to see the faces of whoever was carrying out those activities. I feared looking into a face that I had given my heart to.

I loved dark rooms. They developed the pictures I clicked. They were the rooms where I buried my secrets. “Dark room,” the game, was the liveliest memory of my childhood. It is from a dark womb that a child comes into this world. 3am is the time I write. In the darkest of hours, the most vibrant pieces turned to ink. You could cry and no one would notice. You could smile and light up a dark room. Darkness was personal and private and a secret keeper and a love bearer. Absence of light saved me again that day. No light meant no existence in the eyes of the world. They didn’t know that a life breathed cautiously in the dark on the fourth floor of the building that stood alone at the end of the fifth lane called Mehr.

The only terror-stricken piece from my stay there.

I am sitting on wet bathroom floor. I used to jump when I saw a cockroach but this turns me to iron. An iron that is ready to melt but doesn’t know how to. When I know that death might be ringing the bell at any moment, I need ink. The sweat trickling down my forehead doesn’t allow me to write. My hands shiver. Language in my arm turns to gibberish on the paper. I don’t know who is killing them. All seem innocent in their own right and violators too. What is the religion of humanity?

While waiting for an unwanted guest to arrive; those relations I’ve made in such a short span, light my nerves and current runs through my spine.

A bit about Kaushiki: I’ve been a self proclaimed writer from the age of thriteen. Poems, short stories and abstact pieces have been the staple diet I serve and survive on. After eight years of constantly writing, finally, I’ve found the courage to share with a larger audience. This too, mainly, is because one fine day, an acquaintace walked up to me said that after reading my work, he starts to believe that something good resides somewhere in the world.

That push was enough and here I am. In my own small ways I’ve been trying to alter thoughts, judgments and conclusions. Words have the power to calm storms. I want to be a part of that revolution.

And this is just how I choose to begin.