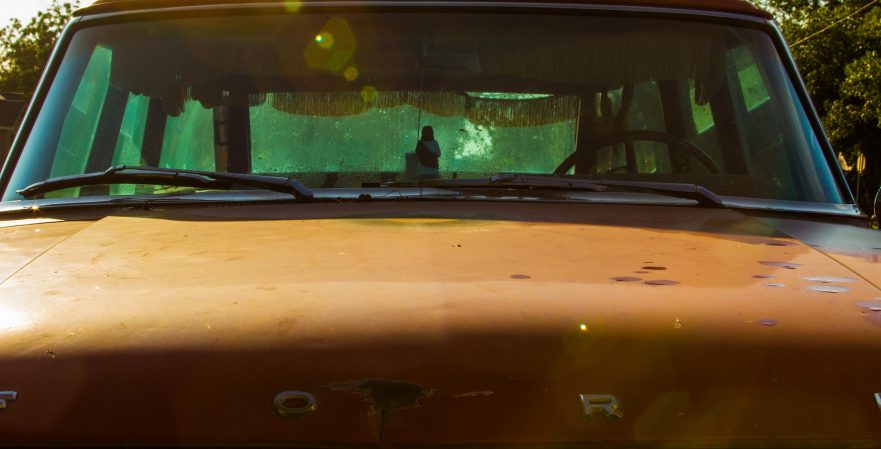 photo "Spacegrass, Whatever It Feels Right" (above) by Tyler Malone aka The Second Shooter

Ever since I was a zygote, my father told me that Santa wasn’t real. I’d unwrap my presents on Christmas and afterwards he’d show me all of the receipts and tell me that they didn’t come from the North Pole but from KMart. He’d tell me it would be physically impossible to live on the North Pole unless you’re a snowy owl or an orca. He’d ask me, “Is Santa a walrus?”

“Look up at me when I’m talking to you. Is Santa a snowy owl?”

“Santa Claus is not a snowy owl!”

“Because I’m Santa. And I’m not a goddamn snowy owl.”

Then when I became—I forget the age—ten or eleven. Maybe thirteen. Basically when I hit the double-digits, dad pulled me aside and said, “I have to let you in on a secret. Santa’s real.”

I asked what he meant and he told me that he had been lying all along, doing painstaking rituals to fake that he was Santa.

He started telling me Jesus and God were real too. Up until then, he’d play me George Carlin albums where George made Christianity sound like a mental health disease. We’d drive by churches and he’d tell me they were basically banks for stupid people. He’d say, “Yeah, God is omnipresent and omnipotent and he rides around in an omnibus. And if you believe that, you’re an omni-idiot.”

Now all of a sudden Jesus was historically authentic. God was really up there in the sky looking down on us. Santa was going faster than the speed of light every December 25, just traveling at E=mc cubed.

I fought him on this, literally, our fists representing atheism and theism. Bloody, standing in front of the fake Christmas tree, I told him, breathing heavy as hell, “How can Christmas be real when our tree isn’t?”

And he picked up an axe, kicked open the front door and went straight into our neighbor’s yard where he hacked down their elm. He put it standing hunchback-style in our living room where it looked like Wilt Chamberlain unable to stand in a kindergarten closet. He chopped the fake tree up into pieces and fed it to our fireplace where it gave out near-lethal smoke and while we watched it burn he ran through the argument from motion and the argument from efficient causes and reductio argument and gradation of being and argument from design. None of it made sense, but he threatened me to counter what he’d said. He repeated them again, fists clenched, clamped, collided together. He made me memorize the theories and sent me to Catholic school and Catholic restaurant and Catholic bowling alley and Catholic everything until I started thinking in Catholic, which means my brain was operating like it had a Gregorian chant stuck on brutal repeat.

I believed in Santa.

And, reciprocally, I understood Satan. I understood that he was the opposite of Santa. And I realized that with God and Jesus and Santa came the Devil. A beast in my mind. I feared him worse than snakes or spiders or heights or dogs or open spaces or closed spaces or medium spaces or anything. I feared that hoof-footed, red, heavy-metal video pitchfuck more than anything. I imagined his teeth as metal icicles, his forehead as a pissed-off soldering iron, and his eyes as two angry scrotums.

I got married at thirty-two to a Protestant girl who caused a huge ruckus in my Catholicism inner circle, but she promised she’d follow the Catholic God, so we figured we’d let her in. She reminded me of a cheerleader who had done a ton of downers, like a cross between Barbie and barbiturates. She had no fight in her; I could imagine her mother with her nails drawn when she broke it to her that Santa was real. You give in if your parents are desperate to ensure the tradition of belief.

The problem was that some of the Catholics found out we believed in Santa and they tried talking us out of it, which is ridiculous because they supposedly believe in God and how can you believe in God and not Santa? That’s like believing in Reese’s Peanut Butter Cups, but not believing in saturated fat. I hung on strong, but she caved in and God died for her, in my opinion.

I was sticking with Santa no matter what. I don’t want to die and wake up and find Santa standing in front of me at the Pearly Gates and have him say, “So, why did you stop believing in me?”

“Umm, Santa, I apologize, but an elementary math teacher from my church told me you weren’t real.”

So I’m alone now. Except I’m not alone, because I have God and Jesus and a trillion angels and Santa and a crap-load of reindeer and I’m heading to the North Pole where I’m going to work in The Workshop hopefully forever because hopefully Santa will grant me eternal life hopefully, except it’s negative forty-eight outside my tent right now and the thing is shaking like the fist of my father on Easter and I’m worried it’s going to fly up—and there it goes, straight into the air, spinning around like some Oz hurricane shit and I’m left here on the ice with my beliefs frozen and my eyes frozen shut and my hands locked in prayer and they say freezing to death is the best way to go but they’re wrong.

You won’t survive this no matter what you believe in. So give in to life. Give into madness. ~ tyler malone