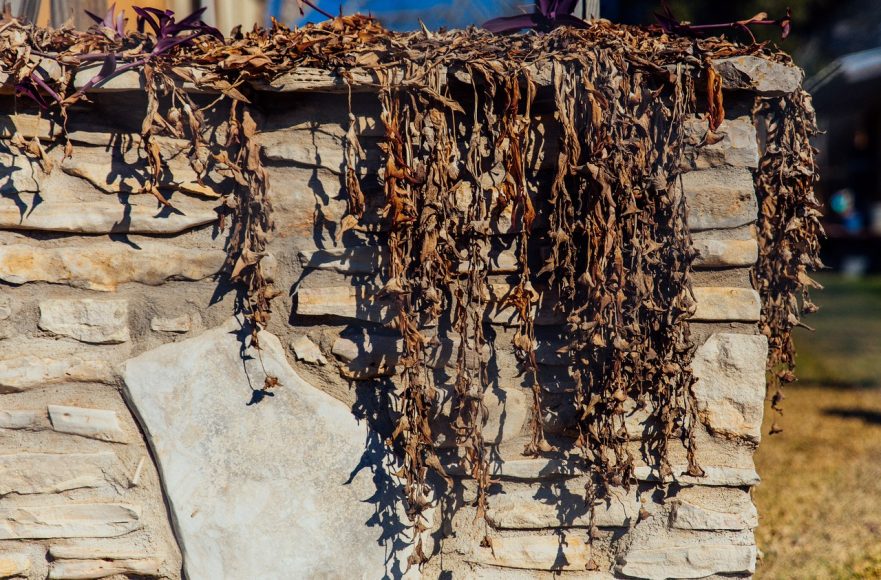 photo "Disrepair Despair" (above) by Tyler Malone aka The Second Shooter

Chevy stepside rust fades when Texas horizons distort from blue to grey, promising only the crawl of darkness. Stark against crepuscular atmosphere slants a white house filthy from foundation to deteriorated shingles. The frame sags into dry Texas soil. Ancient worms and creation’s bones partially devour what’s inside, memories of no one who returns here, hands in pockets hoping to receive nothing by arriving with nothing but curiosity and hate that home holds.

A yard’s garden is nothing but fuscous weeds that replace the arched bricks that once mapped parameters. Gardens and foreign growth have become one as the old forgotten world becomes a meadow. Roses are beyond ruined, same as when I cared for them years ago. The flowers taught me my angry language. My grandmother’s arthritic hands were too twisted and unresponsive to groom them, so she’d watch me disbelieve that God created beauty, believe that earth was cruel. Goddamn these sharp fucking flowers. I’d snip stems before the condemning arthritic hands of God would judge me and my words under the sun, creating shade for some but shame for me. I’d never be a good man if I used those words. From dirt, a better man could be built. But I had to bleed.

Home draws me to the side yard. I walk over collapsed fence chain as easily stepped on as sleeping snails. Grass is overgrown where dogs used to huddle by a shed. Dalmatians with spots that should have split when Daisy’s ear filled with bacterial puss and my Dad tried to extract it with a $5.00 syringe from the downtown hardware store. Grandmother watched Daisy yelp, beg in no language. Useless hands held iced tea while Dad yelled for me to hold down my dog so the buildup could be drawn out. The bacteria congealed and her head went septic before she was executed, put down by a high school boy who did that sort of thing with a loaded shotgun empty of sentiment for $50.00. I tried to hide her in the now rotten shed. Even then its walls were layered with cellar spiders, monsters over everything my family kept.

An uninflated above ground pool, emptied of anything other than what crawls in, spreads in an accidental shape among backyard potholes. Its plastic remains are close to the back fence that separated neighbors from us but not us from history. The Martin family was the first family that warmly greeted our town’s first black family. “Welcome,” greeted Mr. Martin, “now if you coons don’t leave by sunrise, the only thing that’ll be blacker than you will be your charred bodies.”

Grandmother closed the window blinds to torches at sunset to boil Campbell’s cream of mushroom on the stove.

Above sparsely leaved trees, light’s gloom shades plywood windows. Nails pounded in by hand, metal flush with chemical wood. No matter what angle my hands pry, wood doesn’t lift. Hornets under the roof move as a father’s fists after children are locked inside his house, with the rest of the judgmental world far off under moonrise and his mother in her dim room, dwelling in minimal wattage as cooked thumbs moved past old testaments.

Insect wings are the sweetest things in the sky. There’s not a day we’re not dying, but days can be spent banishing yourself outside your own childhood home, letting nightly creatures battle echoes.

Looking over bull nettle growth stretched across what was home’s gravelly driveway, a slim shadow peeks under the board covering the front door. Inside is what made me. What was once alive calls.

Lifting the rotted board, I repeat what I’ll tell anyone who walks by and questions my breaking and entering: This house is inside me. I have to see it dead.

Splinters invade my hands when the board gives way to the entire house and falls on the gathered, layered leaves breeze gifted to the porch and no one returned to nature. Above the living room, wood craters downward from the ceiling, burdened with what seeps from the roof, sharing the despair of disrepair of farms taken by banks to be assaulted by the sun, never saved by a good pair of hands.

Stagnated water soaks into bones. Mold like bruises on my grandmother’s skin corrupts sheetrock separated above flooring decomposed into incidental black holes. Nothing lives in the living room, where weekly prayer meetings were held to confess living past sunrise. One of my hands always held the arthritic hands of my grandmother, who clenched and hoped to take something from my veins.

Uncirculated blood in my ears is all that pulses in the house as I step towards the kitchen which shares a wall with the living room. Down the longer shared wall, I would creep from my room at night for a glass of water. Just as then, nothing lights the journey. Home has been cleared of anything resembling a past, but it’s all still there in the darkness. Life leads back to clutter. The last traces of light this side of the world are gone. Nature’s buzz rips through the open house. Stars offer nothing as I reach my hand around the wall, sliding my fingers across the walkway’s frame and pencil marks measuring my height from youthhood until no one cared. No matter how you grow, family always makes you shrink. By instinct, even in rehearsed fear, I search for the switch on the other side of the wall, which always brought the kitchen to life. Not even roaches covering the wall would stop me from searching for it, my hand sliding down the painted, weakened, wet surface. Finding the switch I feel what haunted me while I was young and thirsty, helpless in darkness. All bone and sinewless with decay, a hand from the house’s darkness grabs my own.

The cardinal rule of horror movies: Don’t walk into that house alone! Especially the one in your head. There’s ghosties in there! – mh clay