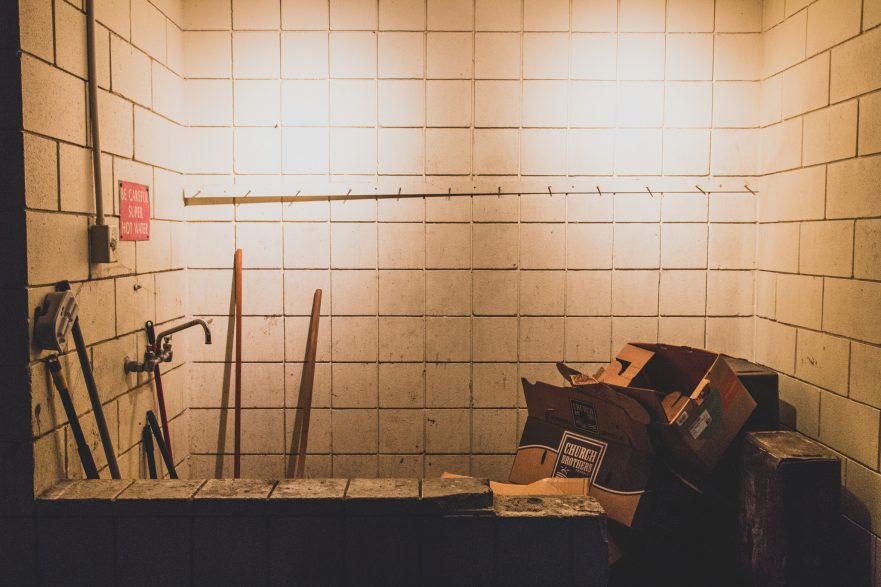 “My planet sweet on a silver salver,” she said.

“What doesn’t?” Dana asked. “It’s a song lyric, Echo and the Bunnymen.”

“It doesn’t matter,” she said.

“Besides, I came out here to have a break, I didn’t want company,” she said.

“That, and you don’t even smoke,” she said. “So there’s no reason for you to be out here.”

“Huh?” she grunted. “Yeah.” She looked around and started to giggle. Of course, fresh air, not hardly. She looked at the dumpsters next to him, at least it wasn’t dirty restaurant trash, but it was trash nonetheless. There was the ashtray next to her and there was a cigarette still smoldering in it, not one of hers, but one from before, burning slowly past the tobacco to the filters of those to come before it.

She laughed at him again. She remembered his name, she knew it, he had a name tag, she knew him too, but it was a game she liked to play with him. “What’s you name again?”

“Okay, Ken-ny,” she began. “Look at this place, just look at it,” she demanded. She paused and poor Kenny was somewhat unsure of what to do. He looked at her, unwavering and ducked his head like a dog waiting for the newspaper on the nose.

Dana looked at him too with the blankest expression she could muster. She took a cigarette from the box and put it to her lips. “Just look at this place Henry.”

“Just look at this place, Kenny,” she said.

“Yeah,” he said. He loosened up a bit, but only his eyes. He saw the walls around the outskirts of the alley. “Yeah?” he asked.

She struck a match. “Just look at the place, what a fucking mess.”

He looked around readily now, the dumpsters, the puddles covered in oil, the ashtray. “So?” he said. Then he looked at her more brazenly. “So what?”

She lit her cigarette. She exhaled. Her smirk followed. “You don’t belong here, Kenny.”

“That’s right, I know you, I know you don’t smoke. This is my cigarette break, I’m tired of talking, I don’t want to be rude. On second thought, I do, you should leave, Kenny.”

“Unbelievable,” was all he could say. He walked back to the loading dock door of The Cook’s Nook, the discount kitchen store where they both worked. He hesitated at the door as he looked over his shoulder. “Unbelievable,” he said.

“Oh, Kenny,” she said once alone. “In any other situation.” Dana moved back on her perch, two stacked plastic milk crates topped with a piece of cardboard. They always tell you what a dirty habit smoking is, she thought. How many of them smoke in a place like this? “Fucking nasty,” she said.

A crunch came from the mouth of the alley, which proved to be a bicycle’s tire on a paper to-go cup. Dana took the final drag of the cigarette and dropped it into the ashtray. The bicycle came closer revealing a young man as a rider. “Hi,” he said. He dismounted, walking the bike as he did.

“You have a name tag, it wasn’t that lucky of a guess.”

“Good gig?” he asked. He moved his bicycle to an ancient bike rack that was reduced to tarnished galvanized pipes held together at rusted joints.

She looked around the alley, the dumpsters and ashtray, the trash, the absolute filth she was sitting in, and she laughed. “Yeah, right.”

“Why work there then?”

“Who are you Jason?”

She stood up, she brushed the front of her clothes, looking down all the while. She brushed the top of her breasts out and then underneath them, she brushed down. “Well, Just Jason,” she began. “I hope to see you again.”

“Sure,” he said. He said it with no emotion, a flat hum, like a refrigerator. He tugged on his bicycle, checking to see if it was locked well enough. His smirk made her freeze. He walked away. He kicked the paper cup, the one he’d crushed on the way in. She looked down, held up her watch. Her fifteen minutes were over. There was no one to miss her inside, not on a stocking shift, no. She moved back to the crates, sat down and all the while she looked at Just Jason as he went. When he reached the mouth of the alley, she pulled out her box of cigarettes, and debated smoking one. A gas lamp clicked on in the alley. In its blinking she thought about a black out, how wonderful it would be, and how she would get the night off from work. Looking up to the sky through the alley walls, the ugly backsides of buildings, the sky was clearing. In a small hole in the clouds she saw a star. She decided it was probably a planet. She wished for a black out. When it didn’t happen, she wished for clear skies, and a dark night without stars.

Life is smoke you can hold, don’t let it drift into the night sky, taking you with it. ~ tyler malone

A bit about Anthony: Anthony ILacqua's third novel Warehouses and Rusted Angels is forthcoming. His novels, Dysphoric Notions (2012) and Undertakers of Rain (2013) are both published through Ring of Fire Publishing. He currently functions as editor in chief for Umbrella Factory Magazine that he co-founded in 2009. Meet Anthony at his blog.