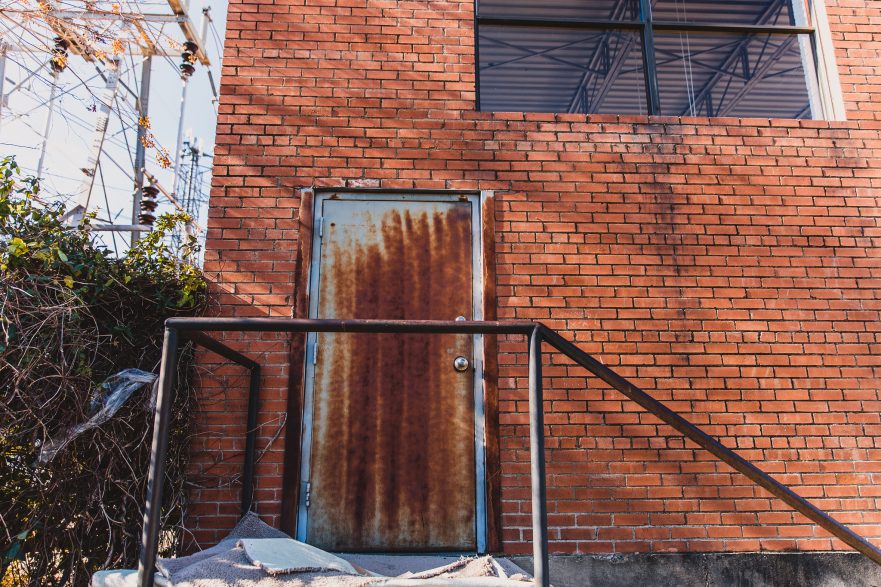 photo "Adulthood's Door" (above) by Tyler Malone aka The Second Shooter

The marriage was over. Pete realized the damage was irreparable when Julie, in a manic episode, disappeared without warning and returned three days later with a twelve-hundred-dollar puppy she morbidly named Kitty Genovese. Having been replaced emotionally and physically, Pete took over the room of his twelve-year-old son Elliott, who was then expatriated to the couch. Three days later a brand new bunk bed was delivered to the house in a cardboard box covered with damp handprints. Elliott took up permanent residence in his sister’s bedroom.

Pete’s guilt was assuaged and he settled into his new bedroom. If he left the door open he could hear Kitty running around, knocking things over. He started keeping it closed and when one of the children knocked on the door he pretended to be asleep. Soon he developed the habit of locking it—something his parents had never allowed him to do when he was a child in case of a house fire. Now he was an orphan and a divorcee, more or less, and he could do whatever he wanted. And anyway, he wasn’t worried about dying in a fire. It would probably make him into a martyr among cast-out husbands. He fantasized about it as the condensation from his 7 and 7 formed water rings where Elliott’s glasses had once rested.

Meanwhile Julie wrote and rewrote the introduction to her profile on a paid dating website. The ones you pay for are based on the science of personality and much more likely to garner long-term results. It’s all based on an algorithm. As she typed in her credit card expiration date she decided on the methodology she would use—her own algorithm, so to speak—of alternating truths and untruths. She was a mother to two children and a darling dog (true), recently divorced (untrue), born and raised in Minneapolis (true), who didn’t drink or do drugs (untrue), politically opinionated (true), and a frequent volunteer for a plethora of reputable Christian charities (untrue). She spent her time at work and home in a reverie, clicking and scrolling and dry swallowing diet pills. Whenever she came across a man she thought showed some promise she would write down his profile URL in her notebook. She was going to be the perfect second wife.

With both parents lost within themselves, the children turned to each other. Cassie was a lanky fourteen-year-old with a permanent retainer and a collection of cheap makeup she applied every day with her fingers. Elliott was pleasant and smart but completely uninterested in forming relationships with his peers. He spent almost all of his time outside of the house and rarely told the truth about where he was going or where he’d been. Mostly he rode around on his bike and drew maps of different parts of the neighborhood. He was banned for life from the 7-11 down the street after a shoplifting spree the previous spring. They wrote an official pact on a sheet of paper ripped from a spiral notebook, tore it in half, and each chewed and swallowed their respective pieces.

When the summer ended, Cassie started high school. Elliott offered his condolences as he pumped up his bicycle wheels. “You’ll fit in. I’m sure of it.”

She didn’t—not even a little bit at the beginning. She felt full of something and full of nothing. Maybe that nothing was the something, she thought. She didn’t realize yet that she was angry. Once she did, she learned how to rid herself of it, piece by piece. She was lucky—she could expel her anger and keep it from creeping back in. Some people can’t do that—they just keep everything inside and let it coagulate into something sinister. And then one day they lose themselves—they plummet into it and never reemerge. They destroy themselves, and their families, and their pacts. They give up their lives to it. Look at OJ Simpson. Look at your grandfather. Look at the president.

When who you are hates who you’ve been, you’re on the cusp of something perfectly devastating and perfectly human. You must be human for that to happen, though. Too many things have human skin but there’s nothing humane underneath. ~ tyler malone

A bit about Taylor: Taylor Evans is a Dallas native and professional candlemaker who writes short stories, poetry, and personal essays. Her influences include Raymond Carver, Don DeLillo, Frank Stanford, and Milan Kundera. She graduated from UNT with a degree in Economics in 2016 and spends her free time feeding her puppy blueberries.