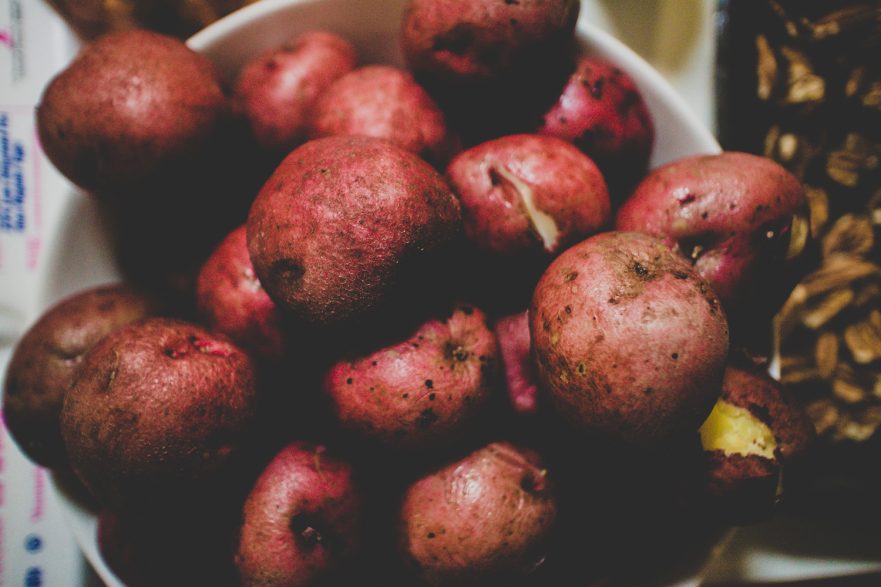 photo "Spud Pile" (above) by Tyler Malone aka The Second Shooter

The day of the fire, Jasper called some guy a douchebag in the drive thru right before dumping a tray of milkshakes in the backseat of said douchebag’s Camaro. Mr. Bowdon had a conniption. His face turned red and that one vein in his forehead started bulging and throbbing like it was about to explode. He screamed, That’s the last straw, taking a straw and crumpling it between his chubby fingers in an attempt to look, what? Menacing? Pathetic was more like it. I noticed a smear of ketchup on his crooked tie and sweat stains under his pits. Even though Bowdon was a total dick, I felt sorry for him.

Bowdon marched Jasper into the back office and closed the door, and when they came out Jasper looked about ready to put another dent in the shake machine. Jasper was no ray of sunshine even on a good day, thanks to PTSD from two tours in Afghanistan. Bowdon would have fired his ass long ago, except Bowdon knew how bad it would look to can a veteran.

“Bowdon put me on probation, fry station only,” Jasper said. “Told me I can’t speak to customers under any circumstance.”

“Probably for the best,” I said. “You hate customers.”

“Yeah, but I hate French fries even more. The order goes Bowdon, French fries, and then customers.”

“Those fries aren’t going to boil themselves,” Bowdon yelled from the back of the food prep area. “Chop chop, soldier boy.”

“Fuck French fries,” Jasper said. “And fuck Bowdon.” He poured a bag of frozen potatoes into the fry basket and dropped it into the oil. He picked up some metal tongs and banged them around for no other reason than to make noise. “Is this what I was fighting for?” he asked nobody in particular. “Fucking French fries?”

Jasper really did hate French fries. He didn’t like the smell and refused to touch them without utensils. He enjoyed telling drive thru customers that we were out of fries just because. Once he even told me French fries ruined his life, but I didn’t press for details. It was best not to press Jasper for anything, especially details.

The timer on the deep fryer started beeping, signaling the fries had reached their optimal crispiness. Jasper punched it off with his fist, and then stood there watching the fries bubble with a sadistic grin until they were far too crunchy to serve. It was his way of telling Bowdon and French fries to eff off simultaneously.

“Bowdon called me a disgrace. Said anyone who got shot in the ass was no war hero and didn’t deserve a purple heart.” Jasper banged his tongs around against the fryer some more and then spiked them onto the floor. “What the hell does Bowdon know about war heroes or purple hearts?”

“Bowdon is king of the dickheads,” I told him. “Don’t worry about what he says.”

Jasper laughed maniacally, harder than he should have. “Oh, I’m not worried.”

“If you hate Bowdon and fries and customers so much, why don’t you just quit?”

“I ain’t never been the quitting type,” Jasper said, still staring at the potatoes in front of him as they bubbled into crispy oblivion. “I’m going to stay here until my mission is complete.” I didn’t know what mission he was talking about, but that didn’t matter. Whatever mission he was on, Jasper sure as hell was going to finish it. “You go on, get out of here,” he told me with a wave of his tongs.

“Sir, yessir,” I said. I stood up straight and saluted. Jasper smiled and returned the favor. It was our little thing. My shift was over and Jasper was closing, so I clocked out and went home to my sad, dusty apartment above my parents’ garage. When I left, Jasper was still standing at the deep fryer watching the fries burn with a far off look in his eyes.

I wish Jasper had been the quitting type, just that once. Quitting was the fate of most people stupid enough to take a job at J.J.’s Burger Den. The only reason I lasted so long was Bowdon didn’t bother me, probably because my dad provided such hands-on experience dealing with dickheads. At least Bowdon never hit me. I actually enjoyed working at J.J.’s in part because I loved French fries, and it was pretty much all you could eat in the French fry department. Fries were the only thing employees were allowed to eat without paying, and, for all intents and purposes, I survived off French fries for nearly a year.

The next day, when I found out J.J.’s burned down, I felt sad and angry and even a little guilty, but I didn’t feel surprised. I could have guessed that the fire started in the deep fryer, and I wasn’t even surprised when they discovered Jasper and Mr. Bowdon’s bodies in the ashes. The only thing that surprised me was when the authorities declared that the fire and deaths were accidental. Nothing about the fire felt accidental. How could something be an accident if it wasn’t even a surprise?

Is it surprising to anyone that I don’t even like French fries anymore? Just thinking of French fries makes me sick to my stomach. That’s no accident.

Life should be lived off fries and stories, no matter happens between first and last breaths. ~ tyler malone

A bit about J.D.: Mister Hager inhabits Northern California with one wife and numerous other animals. His days are spent working undercover as a middle school science teacher and searching for shortcuts through traffic. Under the advice of an attorney, his nocturnal crime fighting endeavors shall remain anonymous. His writing has appeared in Bartleby Snopes, Hobart, Jersey Devil Press, Crack the Spine, and other places too. Find out more at jdhager.com.