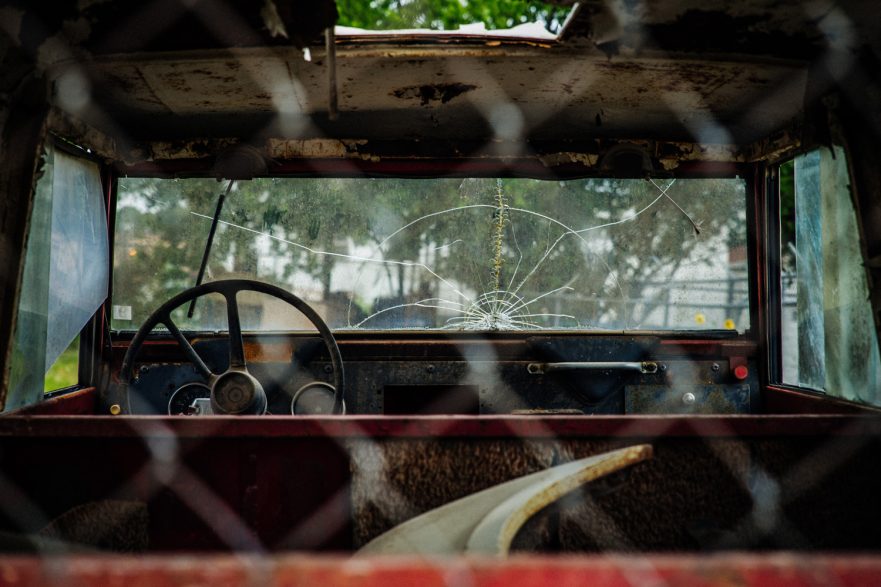 photo "Harvest Road" (above) by Tyler Malone aka The Second Shooter

Harvest Road took women and no one was bothered. From God’s eye and Internet maps it was easy to discover the street but miss sidewalk cracks where dark things with wet skin made night sounds, piles of departed and disfigured pets found under lost animal posters, and ghostly annual October Klansmen hanging in mesquite trees. Karen absorbed all this on Harvest Road, but for her a jog was still just another word for a walk. She breezed past what hid in obvious sight, as she had for months since moving into her rented house where spiders dripped from angular branches and spun thin horror stories.

Running by ghost families in gentrified houses twisted and accented with fruited colors on reclaimed slat fences and real estate signs reading I’M GORGEOUS INSIDE, Karen thought about the lost girls who would repeat that phrase to get through one glance at a mirror, some of them from this lost part of the city where people lived to lose themselves in lost pets and lost phones in homes found among progress. Not many moved in to marketed homes, not until the city would creep closer and the people inside neighboring houses grew whiter with skin tones belonging to people who believed they summoned fire from skies. All Karen wanted was power to build an island away from cars slinking slowly on Harvest Road. Each driver leaned in and listened to music from her phone’s earbuds. She never asked what passersby thought of her or all other women, living or dead, lost or found.

Through music, Karen couldn’t hear the rattle of bread twist ties that held together a Ford Explorer’s fender. Explorers, conquerors coming to claim anything under sunlight, in its deepest shadows. The Explorer was a green dread, a shade of green a painter accidentally chose and painted the world a toxic tone.

Facing a bend in Harvest Road, the largest asphalt elbow wrinkled with grocery bags with handles torn from the weight of expectations, Karen didn’t hear what a stroke victim sounded like when yelling over a rotten engine four thousand miles past an oil change, living on only burnt black sludge.

Over a branch shaped like a river, Karen pretended she was an eternal goddess stepping over bodies of water as she saw the rattling worm drift close to her right calf. The people in the Explorer were certainly white. Not all American monsters were white, because skin didn’t exist on Harvest Road, only echoes of what was human.

Karen saw a drooped face with one cheek thinner than the other as it outlined an atrophied smile, as if Billy Graham had made bad decisions rather than tell a life of lies. A lady in the Explorer’s passenger seat ordered, “Girl, get in this fuckin’ car!” but Karen ignored what was being said until the Explorer sped and jabbed the driver side tire into the curb and stopped atop an already rancid Dr. Pepper spit bottle yellowed from sunlight and tobacco gut spit. Between songs, among freedom and hope for something new in cruel silence, the order repeated. “Get that ass in the car, girl!”

The driver, fist on the wheel, spider webbed elbow out the window, met Karen’s eyes. Blackness was tattooed around his lips. A hungry mouth curled at exaggerated sides when he said, “You know we gave you a ride the other day, girl, so hop in. It’ll be easy.”

Karen combined words. “Wha—Why?” But she couldn’t break from the woman’s unmoved and disconnected face. Her hands reached across the driver’s belly inked with the words GOD’S ROD with an arrow pointed downward and into basketball shorts with the brand cracked and fissured, torn from the polyester. The woman’s hands looked as if she fed rabid rats for a living. A rotten hand motioned and invited Karen to get in the Explorer.

Losing herself in I’m GORGEOUS INSIDE signage, Karen’s electrified brain surged with a No! and she discovered how to move her legs into a sprint in one step. Not a jog but movement with purpose. Over the curb kissed by the Explorer’s aluminum rim, Karen tore through a modest pecan grove. Thirty trees dropped hardened shells, then came only one open door on Harvest Road. Through the trees, all that was left was a church. Karen pushed past the propped double doors with verses etched into darker wood—letters of the Maker of Man, the molder of bone-built women created to always be devoured on Harvest Road, and anywhere else.

Outside the church, on unholy ground, the Explorer didn’t wait. It was nowhere, a pointless predator.

Over maroon carpet, shaded light assembled through mosaic glass recounting worship and sacrifice. From the light came a man. “Not many come running here, but it’s a safe place for those who do.”

Caught in the light, the preacher asked, “Are you lost?”

Karen turned to God’s man, the one high voice on solid earth. Shadow ran across his face. Stained in the shape of the Explorer’s driver, a perverse coil, a jaw ready to unlatch and engulf a woman. And no one would ask any questions.

The creature blessed to be a preacher took a step closer as Karen breathed out: “No.”

Everything is monstrous until forgotten, so Karen stepped out of the church and what lurked, what was gorgeous inside. No sign of anything on streets full of emptiness, as cheap as anything that comes in cardboard or dreams. No explorers, only terrors renewed each morning, exercised, demanding to lose yourself because there is nothing to save.

Reapers, grim and guileful. Fruit, maybe ripe, but not ready. Sanctuary sought, but unsafe.  The only refuge is in the road… Keep moving. (We are pleased to post this one from our Short Story Editor, Tyler. Thanks for a tingling tale.) – mh clay