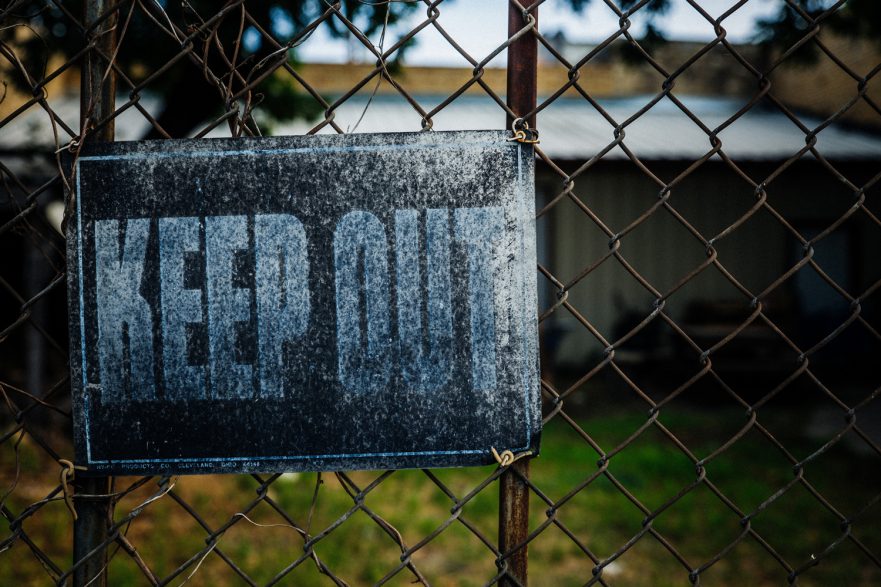 photo (above) "Out!" by Tyler Malone aka The Second Shooter

The flyers up around the gayborhood didn’t say much: no date, no time, and no location. They just say VOTE: A NEW GAY DANCE CLUB – COMING SOON. It’s rumored to be inspired by Studio 54 back in its heyday—you know, when the bouncer handpicked the hot and important people outside the club.

The address everyone is passing around is an old Circuit City building out by the mall: an abandoned electronics store from the ‘90s. There’s a commotion and I turn around and see a guy coming out of the building with a bag. He’s methodically making his way through the crowd handing out golden tickets. No one over thirty is getting a ticket. He isn’t giving tickets to women or fat guys, either. I suck in my belly and march right up to him and smile. He hands me a golden ticket. I’m so fucking excited I can’t stand it!

Blaring club music from down the street is getting closer and closer. A beat up school bus painted black with the VOTE logo on the side pulls into the Circuit City parking lot. A man steps out of the bus dressed in a form fitting rubber suit and chauffer’s cap. Very cute. The crowd goes wild as all of us chosen men with golden tickets climb aboard.

The bus windows are painted black and there are no seats. We’re all crammed together standing up. It smells like sweat and cologne in here. The bus moves but I have no idea where they’re taking us.

We must have left town or something because it’s been over an hour. The bus finally stops and lets us off in a giant warehouse. There’s a long row of gym lockers and a fleet of handsome men dressed in these strange, queer Nazi soldier uniforms: short-shorts, tight tank tops, tall leather boots with a military hat all adorned with the scary swastika. The old fart who was handing out the golden tickets reappears, now in full traditional Nazi attire.

“Gentlemen, welcome to Vote. Here you can party till we kill you. Ha-ha! Woot, woot!” he says with a scary smile.

A swell of dance music starts playing as the queer Nazis instruct us to get naked and put all our shit in the assigned locker with our ticket number on it. We’re shuffled naked through a set of double doors by the thickly dicked guards. Okay, it’s obvious this is supposed to be some sexy, faux concentration camp scene with a political message: cool, but weird. I like the vibe so far, but it’s almost too strange being in line for a haircut and tattoo.

Can we say no? Where the fuck are we going to go naked? None of us have our phones and we don’t know where we are.

A small VOTE logo is inked on my arm right where they labeled the Jews during World War II. I always get an erection when I’m getting a tattoo. I bet I’m getting laid tonight.

After the tat and haircut, we’re given uniforms that are a sexy version of what was worn in concentration camps, only with pink sequin triangle on the left breast. We’re rushed into a giant room that takes my breath away. It’s the biggest, most elaborate dance club I’ve ever seen.

There’s a big archway at the entrance that says CLUB AUSCHWITZ. The place is decorated in very expensive furnishings. There is a long bar, which I assume is an open bar since none of us have any money. Hot Nazis with Hitler mustaches serve as bartenders.

Off to the side there’s an enormous dance floor with a swastika built into the floor. The DJ who looks like Adolf Hitler in full military garb spinning more and more amazing tunes. I can finally relax and start talking with a few cute guys. We laugh and joke about how strange this place is. But we’re lucky enough to get into the hottest new gay club. It’s time to have fun!

The lights and music are getting more and more intense as the evening goes on.

The place is a knot of sweaty sex and music. The hot Nazis are joining in. Hands down, this is the most decadent thing I have ever experienced. I catch a glimpse of a bunch of men in suits and ties standing around the dance floor. They’re wearing gas masks and holding big Bibles.

DJ-Hitler makes a startling announcement over a PA system.

“Gentlemen, it’s time for a shower.”

A giant burst of a fog envelops the dance floor. The smell is sweet on my lungs. I wither down to the floor on a pile of men who look just like me.

I’m lying on my side. A tingle starts in my toe and shoots through me. It’s not unpleasant, just different. There’s a man a few inches away looking at me and another guy behind him. There are more men behind me, too. We’ve been stacked into a freshly dug trench, but we all seem to be okay. The lockers with our clothes starkly placed in a field of nothing a few feet away.

I don’t know what to think of VOTE.

I hate their tattoo. I’ll have my tattoo guy cover it up with something better when I get back to the city.

Our bodies are cages we hopefully learn to enjoy with time, but we choose our own neon prisons with great pleasure. ~ tyler malone

A bit about Dennise: Dennis Milam Bensie’s short stories and poetry have been featured in numerous publications and his essays have been seen in The Huffington Post, Boys on the Brink, and The Good Men Project. He has three books published by Coffeetown Press and currently writes a weekly column for Queen Mob’s Tea House called “30 Years a Dresser” about his career working backstage in professional theatre.