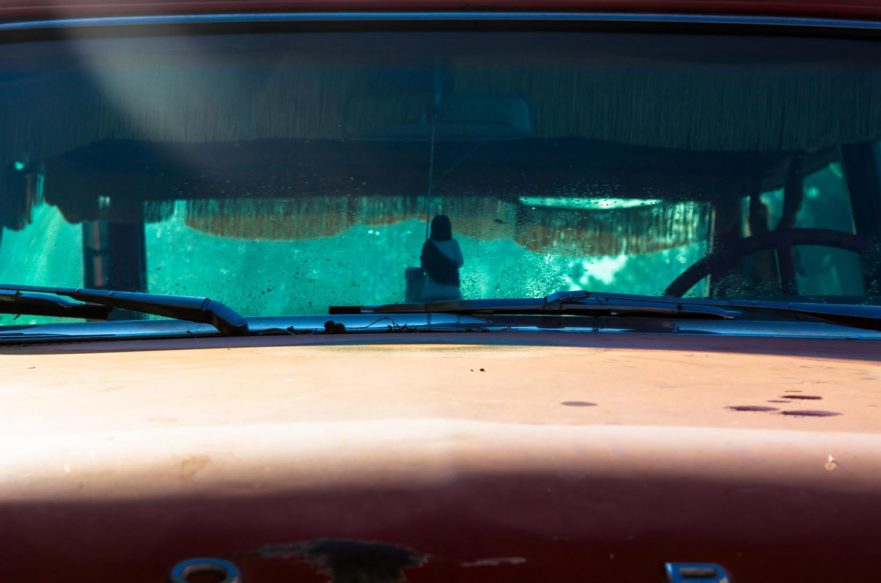 Working at home, I decided to take a smoke break. I started a doobie and after what seemed like hours and my coffee smell stale I decided to go out and get a beer. At 7-11, I smelled hotdogs so I got the twofer, it was getting to be lunch time after all. I added some onions some mustard and some of that smooth flowing chili and headed on home with my beer and hot dogs.

I was smelling the hot dogs and onions as I drove home and was already savoring the taste. I drove slow to savor, and because cops patrolled this area regularly. on my last left turn towards home I noticed a car coming to the stop sign up ahead. As I made the turn I looked, the car did not stop and speeded up instead of slowing down and hit me head on, engine to engine, our grills smashed.

Out of my car, I waited for the person in the other car—a woman with a glow on her face. Her body seem to tingle with a smile on her face but that was soon gone as she saw what she had done.

I sniffed and smiled and asked where is a cop when you need one. She said oh please no cops your car is not that bad.

It was time travel. I sat in front of a judge with the lady and her lawyer at the other table her husband was behind. We were so close, but in a state of righteousness had decided to represent myself. After all, she had said she was at fault.

The judge said I was driving very slow. I was said to have smelled of hotdogs and marijuana.

A grin etched my face. The judge asked why I was smiling.

I said because if we’re going by smells I know why she had a glow on her face and her body seems to tingle and I remember that smell, that smell that told me that she had just been freshly fucked—uh. Had sex recently, or at that moment been distracted by it.

At that her husband jumped up. Bullshit! He stormed out of the court room.

The lady silenced her lawyer and said that she wanted to make a statement. To the judge, she apologized and said she brought this lawsuit to cover the fact that I was having an affair. I lied to my husband and said I was taking a shortcut to an appointment. I… I was at my lover’s house I brought this lawsuit to convince him that I was a cheater but I guess it didn’t work. I did not smell marijuana on this gentleman. In fact, he smelled of only hot dogs and onions.

The judge looked at her and said I should fine you for wasting this court’s time but I think you have bigger problems now. After the lawsuit was dismissed, I went home a free man and finished a doobie and two more hotdogs. My whole world smelled of onions.

In an instant, the world can go up in smoke. The only way to rule over the ashes is to be the highest person on the planet. – tyler malone

A bit about Dan: I came to Texas with a BA in industrial/scientific photography with no experience. For the first year, I took on odd jobs and gained the experience needed.

I landed a job as a medical photographer and did this for several years. After that, I freelanced until I got a job with the Army & Air Force Exchange Service where I shot everything from fashion to aerial photography.

Now that I’m retired my interests are nature, macro and travel photography. Sometimes you may see me at Mad Swirl’s first Wednesday shooting snaps of the mad ones.

A moment in time by the click of the shutter