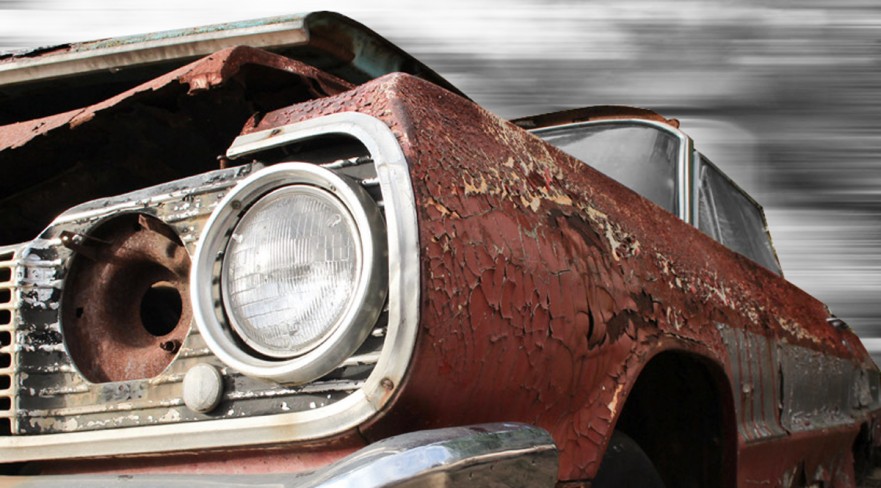 Over the weekend my wife’s Honda wouldn’t start. I went out to the garage to tinker under the hood but I couldn’t figure out what was wrong. Monday morning, she said she was taking my Pontiac to work and I could walk.

The bus stop was just around the corner from our house but I had to get off at the transfer and take another bus, so walking probably would have been faster. I was a half hour late to work and spent most of the morning online in my cubicle, looking at how-to sites, trying to figure out what was wrong with my wife’s car. When we were dating I told her I used to be a mechanic when in fact I used to be a service technician at an oil change place. She found it sexy that I knew my way around a car, and I wanted to satisfy her expectations. Her car had never had any troubles before that I knew of.

When I got home that evening I was surprised to find my Pontiac was not in the driveway. In its place was a big silver Audi.

“Honey,” I said when I walked in the door, “whose car is that outside?”

“That’s George’s,” she said. “He let me use it.” She was wearing a silk dress I’d never seen before, looking ready for a cocktail party or a dinner date.

She looked at me with a smile, but she was not smiling at me. “George is a man I work with,” she said.

“You took my car to work this morning. Where is it?”

“Couldn’t get me to where I was going,” she said, “so I had to trade up.” I waited for her to say more, but her smile told me her mind was not in the room. I shook my head and went to the garage.

I wanted my car back from wherever it was, and I wanted that big silver Audi off my driveway, so I had to get her car started. Under the hood once more, I could see no sign of anything wrong. After I’d been out there for a while, staring at the engine and poking at the various tanks and tubes, I heard a noise outside and opened the garage door. My wife was in the driver’s seat of the big silver Audi, hands on the wheel, pulling out of the driveway. When she was out of sight, I kicked her Honda’s passenger-side front tire and went in to browse new cars online.

Next morning, my wife had still not returned, but I was not ready to give up. I would not buy a new car. I would get my car back. And if I couldn’t fix my wife’s car, I would find someone who could.

After getting to work a half hour late, I called to set up an appointment with a mechanic at a dealership in our neighborhood and arranged for a tow truck to meet me in the afternoon.

I left work early, and when I got home, there was still no sign of my car in the driveway. The tow truck rumbled up behind me as I keyed in the passcode to open the garage door. As it pulled into the driveway, the garage door lifted to reveal an oil-stained floor where my wife’s red Honda had always been.

“Got here too late. Hop in and we’ll take a look around.”

I got into the passenger side of the tow truck, and he pulled out of the driveway.

“Now why don’t you tell me what happened,” he said.

I told him the whole story up to that point, and we retraced her steps from home to work. We crossed the main road and there it was, on the corner: my little old Pontiac, the only car on that block, sitting next to the curb with a loose muffler and deflated tires.

“Let’s take her in,” the driver said, and hitched my car onto the back of the tow truck. At the shop they replaced the muffler and put on new tires.

“She’ll run for a little while still,” the mechanic said. “Of course, if you want to trade up, we’ve got plenty of beauties over here.”

I looked over at the shiny new cars in the lot. They all reminded me of my wife’s red Honda or the big silver Audi that had been parked in my driveway.

“No,” I said. “I don’t think I’m ready to trade up.” I got into my rusty old Pontiac, remembering how my wife used to ride with me, before we had money, before she got her nice new red Honda. I stepped on the gas, and the engine simmered, roared softly, and I knew it would never run like it used to.

People should like ovens. When was the last time you traded an oven for a newer oven? Love what you have. Love it until it’s useless, then love a new one. A shiny one until it’s no longer shiny. ~ tyler malone

A bit about Justin: Justin Eells lives with his coffee pot and two bookshelves in a place called Mankato. He is a teacher and an MFA candidate at Minnesota State University, and he tweets @justin_eells.