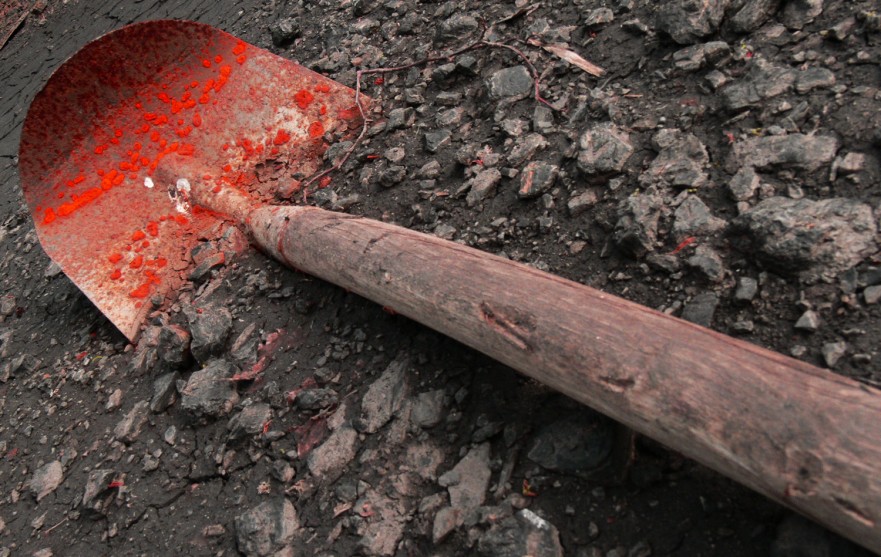 He buried his corpse in an open field. The evening was filled with utter silence and no living person passed the site. The sky looked perfect pale by the rays of glowing moon. Ajay dusts off his hands clapping strongly, lifts the shovel and starts punching the mud to flatten it. After finishing up he stands unmoved, overwhelmed with pride, and shouts: “You bastard, this is what you deserve.” He spits at the grave of the rapist. Phone rings.

“Good job, now get out of there quickly before someone sees you,” an unknown voice orders.

He carries the shovel and gets inside the car. As he moves away from the murder scene Ajay tweets: “@ajaythekiller: rape is a crime and the criminal needs to be killed.” Soon after he tweeted a score of tweeps reply, retweet, favorite and quote it. But no one knows that it is for real.

The newly bought car stops at a residential complex. A guard comes toward Ajay and requests him to park the car inside the parking lot. He goes inside, pulls over and gets out of it. As he heads toward the staircase, an unknown person is prying on him. That person sends a text message: “I’ve found him. What should I do?” Reply: “Just watch him for meanwhile. If you find something fishy just send one of our girls.” The person disappears as Ajay’s footsteps sound thinner.

The doorknob is rotated, opened and closed silently. Ajay comes from an elite background and has bought the flat in Jawalakhel recently. His friends know that his father owns a conglomerate company but don’t have a single idea of its inner working system. Ajay takes out cold food from the refrigerator, puts inside the microwave and while it gets heated he turns on the television. He sits on a sofa and switches to Sagarmatha News from ESPN. The TV reporter gives a breaking news: “It’s been reported that a man in his thirties has been found dead in the jungle of Dhulikhel. The police are yet to confirm the deceased’s identity and have formed a probe to investigate on it. This is the fourth murder in a month. What’s startling is all the murdered ones have been convicted of rape but not given any justice.” The microwave makes three beeps and stops. TV is turned off. He eats the food thinking about his sister.

Ajay’s sister had just graduated from White House Int’l College and he was looking forward to meet her. It was a lovely Saturday and seemed too perfect to believe. But that Saturday was the last day for his sister. His sister used to share everything and had told about her date with a hot charming guy. Ajay had no idea who the guy was but since he loved his sister he congratulated her. She told him that she was going to Nagarkot. So that day his sister went to a motel in Nagarkot and was raped, murdered. Ajay throws away the plate in rage and refuses to think further. He hits the bed and sleeps without dreams.

Ajay dreams that his sister is calling out his name, screaming: Help me, brother! Help me! At 3 a.m. mobile rings five times. Ajay is lost in dreams and finally manages to pick up the call.

“Hello, who the heck is calling at this moment?” shouts Ajay.

“It’s Mr A. Listen carefully. I’ve talked with the Anonymous Group to create a website.”

“It is. You know they are expert hackers. And I don’t think Nepal Government is tech-savvy to block the portal.”

Ajay quickly gets up from the bed and grabs his laptop. He starts working on creating a website: www.killingtherapist.com. He secures the IP address and server with the Anonymous and launches it. In his first post he writes: this site is for rape victims, you name your rapist and we shall kill him. Feeling excited and jubilant he sleeps again.

Next morning he switches his laptop on and checks the website. It’s got 50,000 hits already. He writes a post:

The reason for launching this website is to address the problem of rape and its victims. We have a society and government that is apathetic and men suffering from misandry. To legalize prostitution is one thing but forcing someone to sex is violence. Men have become monsters and we should bring it to an end.

His note soon becomes the most talked in the town with awe, gratitude and horror. People in the streets of Kathmandu discuss with each other. While many applaud it others remain emphatic. Ajay then leaves Nepal in the weekend.

On Monday evening Ajay was trying his best to not do anything stupid, which would cause sorrow and shame to his family. But then the image of his sister kept revolving around his eyes. It was like a dream, an unknown fantasy. He thought for four hours and finally came to a decision. He decided to kill the rapist. For few months he had followed that person’s activities and made map of his moves. After understanding the rapist’s behavior he created a fake account in Facebook and twitter and then added/followed him. Ajay quickly befriended that guy and called him to go for a drive for New Year Eve’s party. The rapist agreed.

While driving towards the destination Ajay had already got bottles of beer and gave one to him. Mr X drank it and fell unconscious. Ajay stopped the car near the burial ground. It was a quiet evening when Ajay unzipped Mr X’s pants and mutilated his rapist’s penis. Ajay kept the cut organ in a plastic sachet and dragged the body with his gloved bloodied hands. He threw the body into the already dug grave and left without remorse, satisfied with violence.

Just as day births night, violence births violence. Just as stars, hate becomes is endless and hangs over our heads, and rarely is it justice. ~ tyler malone

A bit about Arun: Arun Budhathoki is a poet and fiction writer from Kathmandu, Nepal. He has published five books so far: Edge, The Lost Boys of Kathmandu, Poems on Sikkim, Prisoner of an iPad: New Poems and Second In Love: Short Stories.

His works have been published in MadSwirl, North East Review, Driftwood Bay, NNATAN and Dead Beats. Second In Love is his first short stories collection.