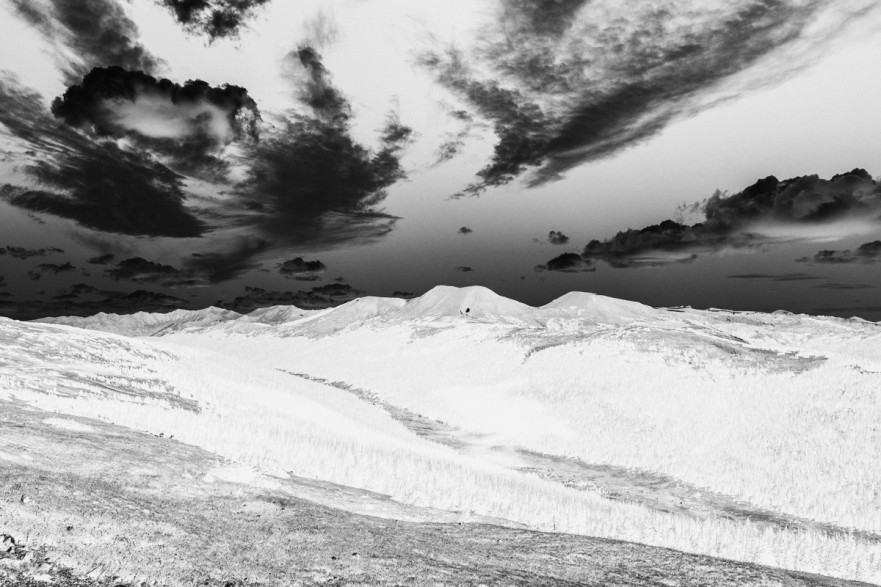 The thing he missed most was the sound of birdsong.

After the change, you no longer heard birds. You might see birds high in the sky, now and again, far from humans, as if too frightened to come near. But you didn’t hear them. You couldn’t hear anything. There was a ringing that droned in his ears but he wasn’t sure if that was the after effect of the noise the explosion made or if was just something he heard. There weren’t any trees, either. The sky was barren, a stark grey pallor filled the sky.

He walked along the shore. The ocean water didn’t come in great crashing waves like before. The water moved like thick petroleum. He drank the water. Even if he killed him, he had to drink it so as not to die anyway.

He’d been walking alone for at least a year. He’d seen a few people. He met one man a few months ago who was looking for his wife. He spent a night with the man. They ate a raccoon together on a spit, cooking above a great fire. The man’s eyes were streaked red. He spoke in whispers.

“I used to be farmer,” he said. “Before the change.” No one referred to what happened.

“She can’t be far from here,” the farmer said.

“Do you think she made it out alive?”

“My wife made it out,” the farmer replied sternly. “She’d called me the night before and said she was taking a plane back from the Midwest to the coast.”

The man imagined the plane evaporating in the sky, turning into a splotch of water in midair.

He listened to the farmer, chewing on the gamey raccoon meat. It wasn’t tasty but it would keep him alive. He licked his fingers to savor every last bit of the meat. This kind of meal didn’t come around often. When you saw something move you killed it and ate it to stay alive.

“She made it out all right. I’ve been walking up and down this coast about ten miles in each direction. I know I’ll find her. She wouldn’t leave me. She couldn’t live without me.”

The man watched his friend tell his story, the moisture of his eyes glowing in the fire light. He missed his own wife and two boys, but he knew he would never see them again. They died in the explosion, along with almost everyone and everything else. He remembered the heat when the sky went white. There was a loud boom that drew everything into an eye in the sky and then a deep silence. Then the heat came pouring from the sky, like a great oven door had been opened. The heat burned his nose and throat, like he’d gulped flames. He saw bodies vaporize, some splattered onto walls, their silhouettes outlining arms and legs reaching out in fear. For days afterward he saw only dead things on the streets and wondered why he hadn’t died. Why should he have survived? He had been in a garage, working late into the night. The metal garage door was only slightly open. He worked by an artificial lamp, listening to the radio. He liked the old music.

But some had survived, like this farmer. They wondered around in shock, frightened and unable to believe what had had happened. Earth was annihilated. A giant clang had emptied the planet.

When the man left in the morning, they shook hands.

“I hope you find your wife,” he said.

“Are you looking for anyone?” the farmer asked.

The man didn’t reply. They didn’t exchange names. Why should they? No one needed names. Everything was nameless, even the things on the Earth. It was just a matter of time before he’d be gone too. He knew it. There wasn’t any point in pushing too hard. He walked to walk. He looked up at the dark sky and wondered what had been the point of the history of life on the planet. He wondered why we’d evolved from monkeys. Human beings were just too stupid to survive. Millions upon millions of lives. We came this far, reached out into space and then folded in and blew ourselves up.

None of it mattered anymore. But what he missed most were the Sunday nights walking with his family to the park. He loved the twilight. The sound of the birds, of finches, of sparrows, chirping in the trees. So many trees. Oak, Maple and Locust trees. And the cloying smells of flowers. His wife showed him the flowers. Pulling a bud off a flower, she handed it to him.

He smelled it, almost begrudgingly, his mind preoccupied with work. Despite his initial resistance, he loved the way flowers smelled. This time he even pulled a few buds off of the tree himself. He looked down the wide street that led to the park. There were gigantic Oaks, some more than a hundred years old, their leaves gleaming in the sunlight. It wasn’t clear why trees, flowers and sunlight could be so refreshing.

He remembered the last time he looked way down at the row of houses. Some of the houses were mansions at one time. Rich merchants from the city had built their mansions on these pretty streets. Each house was designed differently, each a different color. Most of the houses had gardens, showing off tulips, dandelions and lilacs. The very last time he took in the view and breathed the air, he looked up at the sun, now setting over the trees. He was happy to be alive, happy to have this moment. He heard birds twittering from high up in a tree. They were nesting in the branches, out of sight.

He thought to himself: This could be the last time.

We have ourselves, always. Know that and love that. It’ll be all you can love when no one else is around. When everyone is taken not by gods, but by devils–other people. – tyler malone