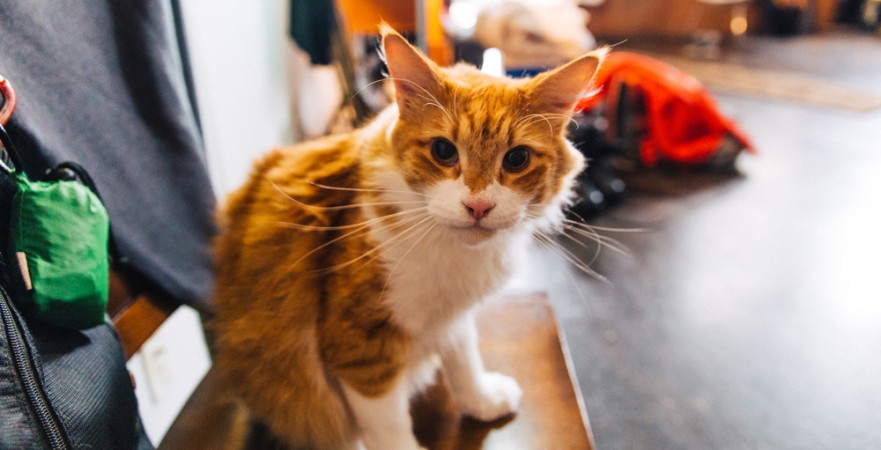 I floated on golden cloud from place to place. All I had was my soft brown and white fur, my tiny pink tongue, my piercing blue eyes that melted the hearts of everyone who saw me. Meow! Meeee-ow! There were so many ways to express myself. But no meow could capture the way I felt when they cut me open.

Yes, they numbed me, but Siamese cats are not dumb. I’m not one of those arrogant cats who think our breed is at the top of the hierarchy. All cats are created equal. That’s why I was attracted to Bosch, the tomcat of an artist here in downtown Philadelphia. Manisha would let me out at night after my aggressive door-scratching. The two of us – she still wearing her blue mail delivery uniform – and I would run down the wooden stairs, me softly padding down while her black shoes tapped lightly on each step.

At last I was outside!

Out into the excitement of downtown Philadelphia. Winter was upon us, but nature had seen to it that my fur had thickened. Ah, the glorious smells of garbage, or “garbaggio” as I heard tavern owners call it. Dumpsters everywhere. With two leaps, I was inside the green one from an Italian restaurant. Heaps and heaps of pasta – ravioli, angel hair spaghetti, lime-green tortellini – lay on top. I helped myself. What was that squeaking sound? Backed into a corner was a furry brown mouse who saw me and was shitting himself with fear. Fear no more, little mousie, I thought, as I made a delightful meal out of him.

Good protein for my brood who stirred inside me. It was here at the dumpster I met my handsome Bosch, the kits’ father. I peered at his owner’s apartment three stories above. Bright-colored abstracts lined the walls. And there he was. Bosch in his accustomed place. Stretched out like a movie star on the window sill, noble ears pointing to the stars.

I pushed myself against the dumpster wall and stood upright, like one of those LOL cats on YouTube. Yes, Manisha laughs at all of them. My belly is white and brown and my titties are long like ripe Bartlett pears. They’ll all be ready for the kits in two more weeks. I play with a titty with my paw, hoping Bosch sees me.

Leaping from the dumpster, I figure I have a few more minutes before Manisha lets me back in. Snow flurries drizzled through the air. I opened my mouth and caught several on my warm pink tongue. Another noise. It got louder and louder. Slinking from the back alley to the big street ahead I heard fierce arguing.

“We were only dancing.”

“Yeah, dancing lying down on the table with your dress pulled up.”

He punched her in the cheekbone, and she sprawled across the sidewalk. I ran over to protect her, lying across her chest. She was holding her face and shouted, “Call an ambulance!”

Then I felt the kick. With his boot, he kicked me across the sidewalk. Like a punt at the Superbowl party we had. I’m tough and scampered toward home.

On a day I will never forget, St. Valentine’s Day, I woke up in bed with Manisha. It was our cuddle time. Tears dripped down her beautiful chocolate-colored face. As she fluffed up her black curls, she whispered to me. “Ivy, I’m being evicted. Can’t pay my rent. Even with two jobs. Can’t afford you, my love.”

So, what does she do? Leaves me alone. My howls, I think, could be heard on the moon.

Shelters are the death of cats. I cannot die. I have so much to live for.

At the hospital they anesthetized your poor Ivy and took my little ones from me. One, two, three, four, five, six. Were they alive and mewing? Did they miss their warm cocoon and the delicious food I fed them? How had they liked that mouse, one of several, I caught specially for my babes. I must believe they were kind to my kits and ended their lives with love and kindness. I believe it is so.

People can be so cruel.

Lizzy, my new owner, is kind as the vast blue sky outside the window of her sixth floor apartment at the Regency Towers in Willow Grove. She laughs as she tells me, “Ivy, I have yet to see a single willow tree, though you will be the first to know when I do.”

She confides in me the way Manisha did.

Manisha was beautiful and Lizzy is too. She has straight blond hair that falls to her shoulders and lets me play with it as if it were string. My litter box is inside an open closet, so it’s easy to get to. I’d clean it myself if I could, but it’s her job. So far, she keeps it clean.

Do I feel confined? Do I miss my downtown Philadelphia haunts? Do I miss the unmistakable sounds of the banjos strumming and harmonicas buzzing at the Mummer’s Parade on New Year’s Day? Do I miss my Mister Bosch and the thrill of the Dumpster?

Of course I do. What Lizzy doesn’t know is that I plan on running away. Not any time soon, mind you, but when the spirit calls me.

Hold a heart when it falls to pieces, see something die and then carry on loving it, still. Then you’ll know what it’s like to live. – tyler malone