I hadn’t even heard he had been killed until I got all the paperwork, forwarded from that years’ old address on the base in Kansas. He had died in Mosul, or somewhere like that. Some kind of explosion. I found his name online in a list of soldiers killed that month, but it didn’t say exactly how it happened.

Benefits awarded “By Law,” the paperwork said. I guess we were still technically married. No one in his family even told me. His parents always hated me. I hear that they buried him at that big Army cemetery in San Antonio. I heard it was free. I imagine there was a bugle and a flag.

I didn’t even have a checking account. It took me over a week to find a bank willing to let me open one, just so I could deposit the check. I couldn’t find any other way to cash it. I have the starter checks, brochures about mutual funds and Certificates of Deposit. The lady at the bank said that I need to “put my money to work for me.” Is it really my fucking money?

It still isn’t real to me. How am I supposed to feel? I was on the phone begging for a couple of extra days to pay the light bill, while that money was doing whatever it takes to clear and post to my account. It took five days, there was a weekend involved. I got cut back to like 15 hours a week at the dollar store because it’s the summer now and kids are out of school. They always hire three or four students. I put in for a job with the city a few months ago, but never heard back from them. I think I didn’t do good enough on the typing test they made me take at the employment office over in Cuero.

What now? Does any of that even matter?

It’s not like I have a shoe box of old love letters or photos or nothing. A few emails, and my phone still has some pics on it. Pictures of his cock; pics of me sucking his cock. One picture of him driving on the beach at Port A with four days of growth on his face but his hair is buzz-cut and military. In his last email, from when he was over there the first time, he accused me of fucking around on him with a Mexican guy that worked at the meat packing plant. I was, and there were others.

That was two years and three months ago, right after I had left him and moved back to Yoakum goddamned, Texas. After that—nothing. Not a text, not an email, nothing. Nothing until this. It’s not like he owed me anything, and I sure as shit wasn’t expecting anything from him. The last time we were together he left me with a fat lip and I almost stabbed the fucker. We were no good for each other.

Robbie was more the marriage kind than I was. At least there never were kids. That one time, it could have been, but I never told him about that.

It’s too much to think about.

The first thing I bought with my new debit card—the one with a $399,000 balance—was a bottle of bourbon, a Diet Coke, and a pack of cigarettes from the only liquor store in town. On the way home I filled the tank up with gas. I never even watched the dollars and cents add up as they rolled by on the Exxon pump. That thousand dollars I had to put into the savings account in order to get the credit union to open my checking up is more than I’ve ever had in savings before at one time in my life. Maybe I’ll get a new car. Maybe I’ll drive over to Victoria tomorrow. That would be nice. I guess I’ve got some decisions to make.

The dead dictate the lives of the living, that’s how it’s always been. Your ghost will do it too. Absence, sometimes, is more of a problem than presence. – tyler malone 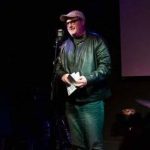 A bit about PW: PW Covington's writing is raw, powerful, and carries the voice of his hard-lived curriculum vitae. His poetry and prose is undeniably of Beat lineage, and his words have the power to carry the full weight of desperate yet hopeful experience.