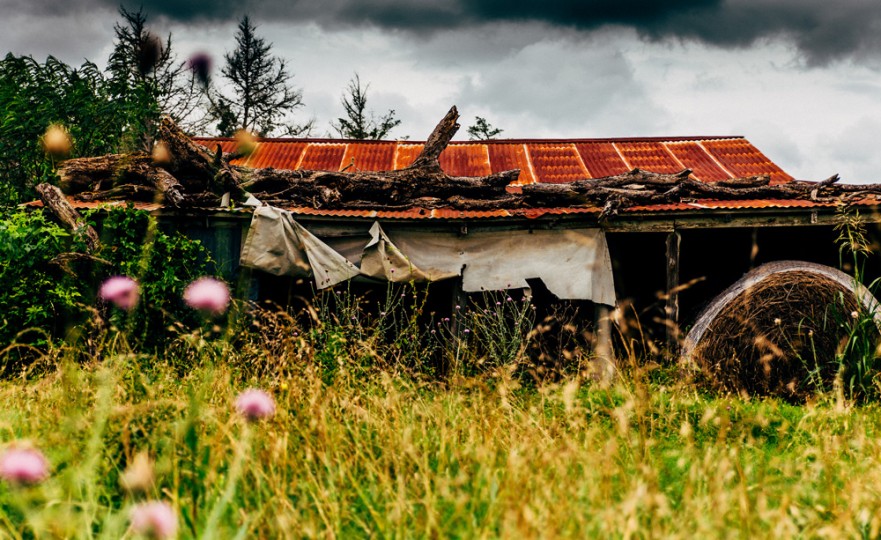 Ralph got the phone call around 3:00 pm. The sun was at that place in the sky where it always seemed to hit his eyes the hardest. He had gone inside to take the call, a welcome relief from the afternoon heat. The relief didn’t last long. The voice was dripping with prepackaged compassion, and the official tone made the message seem all the more empty. After hanging up, there was nothing he could do but walk back into the heavy summer air waiting for him outside.

Ralph went to the front of his barn, which seemed so big and empty. Bales of stacked hay loomed over the entrance-way like somber prison guards. He began to intently pace the aisles, unsure what he was looking for, but sure it was there, somewhere. The pens were vacant, the wood rotted. He tried to remember the last time he heard a noise in the barn, a sign of vibrant life. He could not. Traces of the animals remained; food troughs with scattered feed left clinging to the corners, stains on the floor that never quite got wiped up, stray hairs and clumps of fur that obstinately stuck to the gates.

Ralph looked up into the rafters. The barn seemed so tall, so hollow—like an ancient cathedral, a taunting reminder of the faith he had lost. Not even a crow cawed in the dusty gloom. This was not the barn he had once seen as his refuge. It couldn’t be, and it never would be again.

As he left the darkness of the barn, Ralph cringed against the glare of the sun, lifting a weathered hand in front of his face. He began walking, past the fields of lonely horses and angry cows, past the future miscreants of neighbor children, past the dirt road that went to nowhere.

He stopped at the simmering and stagnating pond, staring at the algae growing on top—a cruel imitation of life. Mosquitoes and gnats swarmed the area, transforming the pond into a toxic zone; like a vat of boiling acid rather than the peaceful body of water it had once been. The stones lining the pond resembled death row prisoners waiting for their execution, peering in, searching for the ones who had gone before them.

The girl leaned forward, pressing her arms against a bent tree stump almost taller than she was. “My mommy said to ask you if you would come for dinner. She said you needed it.” The grin that spread across her face was sickeningly wide, like the grimace of a monstrous clown.

“Needed it? Why would I need it?” Ralph looked for a trace of Anita’s mother in her face, trying to bundle his anger toward the woman with his anger at the girl.

Anita shrugged and turned away, her eyes following a buzzing dragonfly skimming above the rank water. When her eyes met his again, he was struck by how green they were. They shone like emeralds in the sunlight. “Everyone needs food, Mr. Martin.”

Whether it was the glow in her eyes or the innocence of her remark, Ralph felt his anger melt away. He beckoned for her to come closer, which she did without hesitation. Her breath smelled like peanut butter, and the clothes hanging off of her were covered in dirty hay. Her hair shone like fresh chocolate. “You’re a very sweet girl, Anita Summers. Always remember that, okay? Stay sweet. Like chocolate. Chocolate and emeralds.”

Ralph felt an unfamiliar smile creep across his lips. He began to walk away. “I won’t be coming to dinner, Anita. Tell your mother thank you for the offer.”

Anita nodded curtly, a girl with a mission. Her young brow furrowed with determination. “I will.”

Ralph headed back to the barn. It was no longer his safe haven, but it was the appropriate place for what he was to do. What he had known he would do since that phone call interrupted his peaceful afternoon. The pond hadn’t been the right place, after all. It was the barn. It had always been the barn.

When he shot himself, the blood didn’t spray out of his head like it does in the movies. He didn’t utter a profound statement to ring hollow in the deserted barn. The pieces of his flesh fell weakly out of his head, leaking blood, hair, and tissue matter. His body collapsed on the floor, his arms and legs sprawled in every which way, causing him to look like he had been chewed up and spit out rather than shot. His gray hair was quickly dyed red. But, as he lay there on the floor, looking up into the haunting rafters, all he could see were two shining emeralds. He died with a smile upon his lips.

What Ralph didn’t hear was the voice on the answering machine, being recorded as he lay in the pool of blood he had created for himself.

“Mr. Martin, there has been a mistake. It wasn’t your son that was killed, it was another boy in his troupe, a boy named Tom Marvin. Your son will be coming home to you after all.” There was a pause, and a nervous laugh. “After your wife died last spring, and Thomas being your only child, this must have sent you into a horrible shock. We sincerely apologize for the mix-up, and hope you have a wonderful evening.”

The last person on the planet will still look at a dead black telephone and hope it won’t ring, and that’s happiness. – Tyler Malone

I am a graduate student in anthropology and lecturer in writing at the University of New Mexico, and I have had several poems and short stories published both online and in literary journals. I can't seem to decide between academia and creative writing, so I try my best to do both.