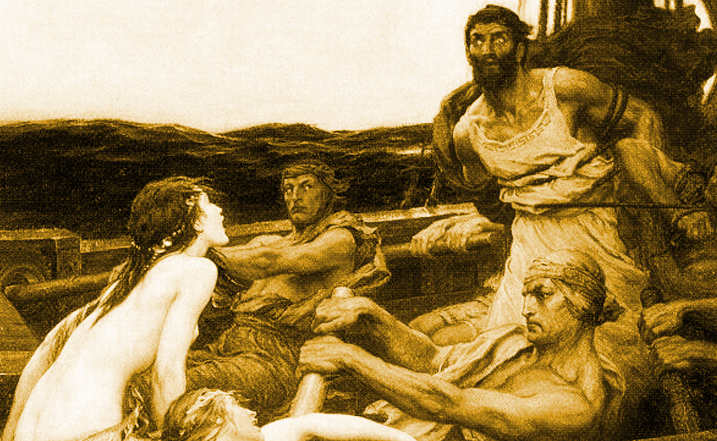 "Ulysses and the Sirens" by Herbert James Draper (1909)

So many evenings, while sitting at his desk, typing, the poor, hungry writer heard a whistle. And it was an exceptionally skilled whistle. The lips captured to a tee the sliding up the scale, then suavely sauntering back down the scale whistle associated with paying a compliment to a hot lady. Put your lips together and blow. Easy, for dreamers. No, only Dean Martin and Frank Sinatra mastered such a whistle intuitively. Everett always heard the whistle at night, pitch-black nights, above a quiet neighborhood. Furthermore he had a hard time believing that a beautiful woman had walked by, a lady worthy of an Italian serenade… Really, he hadn’t seen anybody; the neighborhood lacked neon Va-Voom. The whistle leapt like a fish flashing out of the water. Flashed. Then disappeared into the sea of light evening traffic.

Two years passed. Everett’s progress had been marginal. The novel was not moving forward. He was stalled and desperate. The familiar whistle sounded, that night, again, as colorful, as sexualized as always. He imagined the man behind it, a he-man calling Come hither, Come hither in the dark, calling confidently, like Sinatra baiting a near-certain catch. And at that moment despite feeling lost, despite lacking confidence in himself he began scribbling, and vaguely remembering that he had believed in a metaphor too.

Two years ago he had believed in the possibility of his novel. Nightly he rearranged sentences; he had faith; when he heard the sexy, confident whistle, he sat at his desk imagining a man, a woman, and the scenario in the dark. He fathomed the right words which incarnated the sound’s stealthy and animal seduction. A phrase he should have written down. Goddamn. Tonight, he regretted losing it. He searched a Thesaurus’ bon mots. Stumped. He gently blew into a cleft his tongue made; the whinny rattled him. Like a breeze wheezing through a window crack –

Come hither? Come hither wasn’t the forgotten metaphor. He tied memory’s cart to practice’s wagon, and blew, blew, blew, like a poor, weak bird. Worse. He sounded like a baby having an asthmatic fit. He couldn’t sustain his breath five seconds. The phone b-b-r-ringing lasted longer. He recognized his editor’s voice; he lingered in limbo between detesting and hanging pathetically on the stuttered apologia. “I think it’s closer… there’s a lot in it… there’s something here… I think there’s material here.” He scratched his other ear, listening. His editor sounded a bit woozy, tipsy, he thought. He still recognized her matter-of-fact persona; the seconds in between her broken statements implied that she was simultaneously jotting notes. Hope. She felt his book had hope. It could be a lark. Hope could be just a lark. Evening of larks, he thought.

A window breeze. Lightning crackled; a flash coming and going. He puckered up. Focused. He set a high note sailing. Sailing the rain storm. Out an open window. That was when the lost metaphor flashed. Or leapt like a fish flashing. Leapt like a fish flashing out of the water, and disappeared into the sea of light evening traffic. Everett jotted the metaphor down, paused, returned to the window sill, still imagining some Italian lover, whistling, or a charismatic pimp, crooning, gathering the whores. Come on. Everett relaxed his jaws. Come to me, women, joy, success. Not necessarily in that order, success, joy, women.

FYI. The Truth is always more interesting than lies. Tell me a story that’s all the truth. Just make sure the story has a Gemini in it. Every saint has a past and every sinner has a future. Can’t we have a future. Baby. A lengthy text. From—?

From the dead. Somebody buried with a shrug, a good riddance. Annabel Lee should stay locked inside her glass coffin. Everett didn’t want to hear from his Ex. Particularly not while he was learning to whistle. He blew, less weakly. And sustaining a reasonably long and less shrill tone, his eyes shut, his skill steadily increasing. Come hither.

A rainy evening. The circumstances seemed less perplexing given the storm. His thoughts swirled inside it; such a sudden phenomenon cancelled other surprises. The neighbor smiled more prettily than she needed to smile to accomplish her goal, her clothes drenched. Yes, if she needed to go back into the storm she could borrow his umbrella. Sure.

The umbrella accidentally unfurled as he handed it to her, it’s flowering, she laughed, with an insinuating chortle.

Plop. Plop. Plop. Plop. Rain swelled into a sea. Plop. Plop. A sea swelled into an ocean. Apropos. Sailors whistled. Everett imagined the ancient seamen who still possessed such skills to whistle unfathomable distances, like Ulysses, or Ulysses’ crewmen whistling to their landlocked brides, while Ulysses whistled to faraway Penelope, who heard him, and Everett imagined she leaned slightly in the direction of Ulysses’ boat, but the sirens whistled too, the loose ladies and sultry, evil sirens calling, calling Ulysses because his adventures had implicated him—charming, charmed, launched on a wayward journey.

You want a good, happy life that never teeters towards madness? Don’t be a writer. Do you want to hate yourself daily and question yourself and your mind nightly? Pick up a pen and kiss the good life goodbye. – Tyler Malone

"I'm a social critic, and poet living in Santa Fe, NM. I've previously published poetry in Boston Review, ABZ magazine, Chiron Review, Drumvoices, Pedestal, and other places. In the late 1990's and early 21st century, I was a fellow traveler with the Surrealist Movement of Chicago. More recently, I published an essay included in MFA vs. NYC, an anthology of writings on the book industry, edited by Chad Harbach."