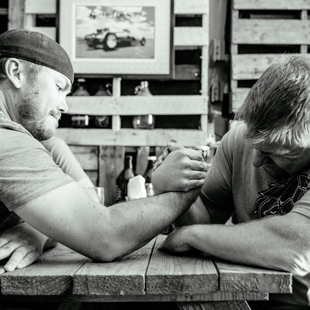 The two sat in an empty plain windowless room with one door, at a thin legged wooden table, on folding metal chairs. They’d been playing cards.

You know I want to hear it, said the larger, heavily bearded man.

What? said the skinny bald one.

The skinny one put his cards down and waved the air.

I told you. I have no friends. What is the definition of friend, anyway? Do you know?

No! he said, raising a hand, it’s being attached to another by feelings of affection or personal regard. That’s what the dictionary says.

No, it doesn’t. I’m not attached to anyone. I have no friends. And that includes you.

But I’ve got to get you to say it—can’t you just say it for me? Even if it’s not true?

No, that would be a lie. Why is it so important for me to say I’m your friend?

Oh, you wouldn’t understand! he said, slapping down his hand of cards. I insist! I am your friend! Admit it or I’m coming across this table and strangle it out of you! Admit it right now!

The skinny one raised his hands palms out and spoke, a note of fear in his voice.

That won’t be necessary. It’ll change nothing. Please, please accept you’re not my friend, and I’m not yours. There are worse things in the world.

Like—like hatred. We could hate each other. But we don’t. Isn’t that kind of like being friends?

It’s not the same—damn you—why do you have to be so stubborn?

Because I have to tell the truth. I was raised that way.

All right, then! said the large man, rising, and tossing the flimsy table aside and lunging forward. Cards flew as his great hands wrapped around the scrawny man’s neck, squeezing so hard the sinews of his arms stood out. The scrawny man’s chair collapsed and he sank to the ground in the grip of the great man, thrashing wildly.

Okay! said the large man, releasing him. And I am your friend too!

The skinny man raised himself on one elbow, rubbing at his neck, coughing. The large man set the table and chairs back up, gathered the scattered cards, and sat down to deal a hand.

Okay now that that’s over, he said, we’ve got cards to play! Sit down!

As the other rose, and sat down, the big man spoke softly, tenderly.

I am glad we are friends—aren’t you?

Yes, I am, the skinny man said hoarsely, stonily, eyes averted, picking up his cards.

Animals, some of us. Animals who want to be loved, all of us. – Tyler Malone