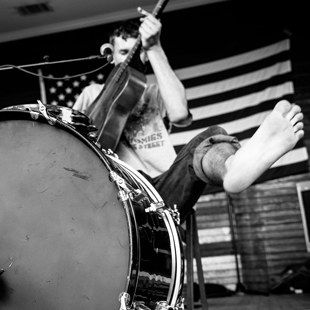 We first wanted to start a wedding band. This is where I met Scott Howard. He was a fat guy playing keyboard across from me in a Manhattan rehearsal studio.

I watched him wobble up the walkway. We lived in a place called the Butcher’s Co-op on Midwood Street, Brooklyn. I stood in the kitchen and watched him from my second floor view. He had nothing but a pullover, white turtle neck ski sweater for outdoor apparel. It was late November. It was twenty degrees that day.

I stood there waiting for him. He had picked an outrageously early time: nine-thirty in the A.M.

He strolled, all three hundred and fifty pounds of him. I watched him out of a small, narrow window. Then he disappeared into the doorway. The buzzer rang. We were on the second floor. I rang him up.

We had a five-room apartment. You walked in and faced a dining room table. To the right was the living room, a comfortable room, size-wise.

Gliding past the dining room table to the left was a small, eat-in kitchen. Straight down the end of the hall, to the left, was a children’s bedroom. My two sons slept there.

Next to Jack’s and Sammy’s room was a large room where Rose and I slept. To the right of the hall’s end was a small den. I had a little Fender amp in there, practiced guitar, smoked pot.

Scott entered. He’d been up all night, he told me. The boys were in their room playing. Rose and I stood and listened to him for a while. He had tousled brown hair, twinkly green eyes, a ruddy complexion.

We first wanted to start a wedding band, independently, you might say. We were budding musicians in ‘seventy-six. I had this dream of playing music ever since I heard a live band play. This was at my cousin Paula’s wedding when I was thirteen and she was twenty-two, and she married a guy named Herb. He was an M.D. who flew airplanes.

It was simply the experience of watching professional players play live music. “That’s happening now!” It was as simple as that – that awareness. It was astonishing, the emission of notes from instruments and amplifiers, that’s all. I was more interested in the guys supporting the singer – in the simultaneity of sound. Simply that this was being produced. Wow! I don’t know how to explain it any other way.

We had some coffee and buttered corn muffins and jelly and chit-chatted. We were excited. We smoked a few cigarettes. My wife made Scott feel comfortable, welcomed him into our home, chatting along with me.

Then I dragged my amp out of my small room, down the hall, plugged into a socket. I placed it at the end of the living room area, off the carpet, in front of the dining room table.

He played the piano on the opposite wall. I didn’t see his face but heard his beautiful voice.

So Scott and I practiced in our Midwood Street living room on Sundays at ten and by the third Sunday we moved to my little room down the hall where we smoked some pot and lit up our souls. We blasted a few rock tunes at that point. I cranked up the Fender amp. He brought along a small electric keyboard for this occasion, where we could huddle in this little room. We played some early rock’n’roll, got high, agreed we were getting better.

Then there were the fruit vendors on Continental Avenue and the Barnes and Noble on Austin Street at the cross-section, landmarks of our first gig in a bar called Healy’s Golden Rest. We felt we were getting pretty good in that little room with six weeks under our belt now.

Healy’s was a nice place, with a restaurant area in the front. The place continued then with a long bar. After the bar were the bandstand and the dance floor with a few tables. In that back room a red light glowed upon the dancers and the band.

Healy was satisfied with the music.

I tell you this because it is important. We were willing to commit ourselves to the sound. We were not playing for money or acceptance, more for a dream.

We first wanted to start a wedding band. This is when I met Scott Howard. He was a fat guy playing keyboard in a Manhattan rehearsal studio.

Weeks later we hired a drummer who jumped off a wood bar and fell flat on his face. Ladies kept dancing, Healy’s was ablaze. I hoped we’d stay in love with everything this way forever.