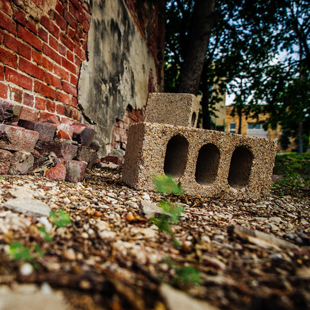 That could have been me getting nearly killed that day as I sat on the schoolyard steps getting high with Ferrone. But it wasn’t my turn, yet.

Only a few weeks earlier I had bought a ten dollar bag of weed on credit from Fat Andy. Fat Andy was a new dealer in Astoria Park. Being a little taller than I was, he had a tiny bald head that sat on his pear shaped body like it didn’t belong there. Despite his menacing look, he smiled a lot. Andy was about twenty, maybe five years older than me.

That day Ferrone bought a bag of weed.

“What about you?” asked Andy.

Shoving my hand in my pockets I said, “I ain’t got no money.”

Andy looked at me and said, “I’ll give you a bag, but you gotta pay me when you have it.” I shook my head agreeing and took the weed.

Days later, I was with Ferrone and we saw Andy. I had ten dollars on me. I thought of reaching into my pocket to give Andy the money, but I didn’t. I just nodded my head at him. He didn’t ask me for it either.

Over the next few weeks I’d see Andy on the street but I tried to avoid him. I either pretended that I didn’t see him or walked across the street so he wouldn’t see me.

Then at the St. Demetrius fair under the elevated train station, I ran into him. It was a July night, hot and sticky. Ferrone and I walked back and forth through the fair, seeing friends and talking to girls. Being stoned made the fair magical. There were multi-colored lights dangling from the street lamps. There were small rides bedecked in blinking neon. The occasional train passing overhead was like thunder roaring from heaven. As I laughed with Ferrone, I saw a sign that read “Magical Tea-Cup” in perfect neon green. It was so fiery I swear I could hear the snapping and buzzing of that neon. I kept my eyes fixed on the sign. Then I got a tap on my shoulder. I turned around. It was Fat Andy.

“Hey, you think I don’t see you avoiding me.”

“I ain’t avoiding you,” I said, leaning in now. The summer night and the lights swirled around me. I was somewhere else.

“Don’t be a fucking smart-ass,” he said now.

“I ain’t being a smart-ass,” I said, leaning even more towards him, a smirk on my face.

I looked around and saw that Ferrone had walked away. Suddenly all of the lights faded away. The world grew dark like a rain was coming.

Now Andy was flanked by two long-haired tough guys. I looked behind me; there was only a wall there.

“I’m going to let you go this time,” said Andy. I nodded like it was nothing. Then Andy wound his arm back and smacked me with a backhand. I stumbled. The two thugs stepped in. As I staggered backwards, Andy launched a direct punch to my face. I fell to the ground. All around me was silent and pitch black. If I got up I knew I would be crushed.

“Now get the fuck out of here you little punk. Don’t ever fuck with me again,” said Andy.

“Hey, what happened?” he asked. We both knew that he’d abandoned me.

Then, weeks later, as I sat in the schoolyard with Ferrone, we saw a guy, maybe eighteen years old, limping as he walked down the street. He looked hurt.

Ferrone passed me a joint. I took a toke and looked on. Then we saw a group of thugs running after the limping man. I noticed that it was Andy and his two henchmen. When they caught up to him, one of the longhairs spun him around and put his arm behind his back, holding him up so Andy could punch him. Andy threw a few hard punches in the face and in the stomach. The guy fell to the ground.

Then I saw Andy pick something up. Now I bent my knees to stand up a little. I wasn’t stoned anymore. Ferrone passed me the joint but I waved it away. Andy had picked up a brick and lifted it over his head. He brought the brick down on the guy’s face. I heard the sound echo in the schoolyard. It was like the crack of a baseball bat. Ferrone and I looked at each other.

Andy and his henchmen ran away. Surprisingly, the guy got up. His face was bloody. He looked stunned like he didn’t know where he was. “Pay your debts next time motherfucker,” I heard Andy say but could no longer see him.

Neither Ferrone nor I called 9-1-1. That was something other people did. We watched the guy stumble away, blood on his shirt, his face smashed and swollen.

I light a cigarette with shaking, cold hands.

You may pay your debts, but there’s always something left over to be taken. Your flesh can be measured in pounds. – Tyler Malone