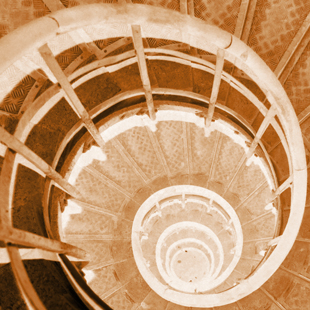 Shyness is climbing a circling staircase.

The staircase leads beyond the passages beyond, life’s slow accretion of days, perpetuating his daily, monotonous grind. The rings of hell could not best the monotony. The staircase climbs toward a horizon of mirrors. Reflections. None colorful, nor colorless. The tints slightly blur at the edge of the banisters when meteorological effects intensify, blurring the glass roof tops. And purpling the glass clouds. There are not experiences enough to fill the mirrors. The stairway climbs beyond houses, hints of purple, reds, foliage, greenery, sights, visions, winks and nods, reflections, reflections, daylight, dawn and darkness

The Shy Man had begun thinking about decrying the terrible sameness. But his feelings were too ambiguous. His emotions weighted by commas, stutters, and hyphens. He wrote words, just words. First, modifying adverbs. Presumably. Supposedly. Dedicated his suppressed feelings to frustratingly terse lines. But after many false starts the lonely words became a body, he wrote words like flesh, suck, and cunt. He wrote pussy no matter that he intended to write I am still a man. Or pussy cunt suck good instead of the rings of hell could not best the monotony.

For many, many years his climb had been surrounded by children’s toys. Basketballs. Bowling pins. Plastic soldiers. Childishly unimpressive gifts. There had been occasional surprises. He had climbed past a traveling circus. He had climbed clear of childhood baubles and entered the stratosphere ascending above plains of grass, and ticky tack houses, all seemingly endless in a panorama of strip malls and mazes. He climbed higher until he now believed he had entered a realm of clouds and myths. He lived alongside the stories of Hercules, of Persephone, Theseus, Perseus, and Pandora.

He felt at last empowered to master his narrative. This is the story of a shy man. His tongue unstuck, as well, and after twisting his mouth unpleasantly the Shy Man spat the words my story. His mouth was swelling however with something cushy, rubbery, and stubbornly insistent. The Shy Man opened wide enough to free a Dumb Red Rubber Ball. It bounced. He chased it. It disappeared down the staircase.

Ridiculous, he thought, he looked ridiculous leaping after the Dumb Red Rubber Ball. He had glimpsed his blurry reflection in the mirror of days, a hyperventilating weirdo, snatching hysterically at a bulbous distraction—bouncing up and down and all around before plunging into the abyss. Damn. Fear. The banister creaked. But maybe falling would still have been a relief from the dolor of shyness, he sighed, the terrible sameness.

The air up high is thin. At Olympian heights, the Shy Man lightheadedly fantasized the Nine Muses. Terpsichore, muse of the dance. Clio, Euterpe, Thalia, Melpomene, and the others joined in swaying. The Shy Man danced like Pandora before she realized the box was not full of happy treasures. He danced until the words cunt, fuck, bitch burst out of his mouth, flying.

The winged demons. Flying away. The Shy Man reached for hope, the last spirit inside Pandora’s box. He grasped for it , and while he fell the Shy Man sang nursery rhymes and snatched at the words sex fuck and shameless cunt. And as the Shy Man tumbled past a paper moon and stars twinkling good bye good bye, he recognized the last word inside Pandora’s Box was his Christian name, and his last hope was his own struggle to say it.

Artists, these words we spend intimate hours with become us, but what happens when we lose our voices and ourselves in the rich madness all around? In that struggle to learn how to speak, then you’ll find something to say. – Tyler Malone

"I'm a social critic, and poet living in Santa Fe, NM. I've previously published poetry in Boston Review, ABZ magazine, Chiron Review, Drumvoices, Pedestal, and other places. In the late 1990's and early 21st century, I was a fellow traveler with the Surrealist Movement of Chicago. More recently, I published an essay included in MFA vs. NYC, an anthology of writings on the book industry, edited by Chad Harbach."