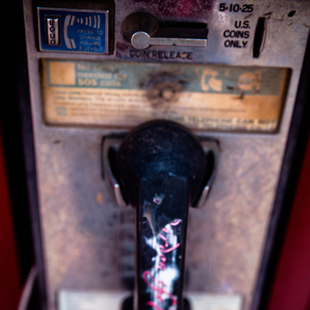 Janice picked up her phone to call her mother. I kept my mouth shut.

I’d offered a lot of useless advice in the past, but had learned to keep quiet. It was almost the end of October and the phone call was just something that had to be done. I was grateful that Janice was willing to call.

I wanted to sneak out to the garage or down to the basement, but my self-serving flight would only encourage Janice to take out her feelings of impotent anger on me. Besides this was our row to hoe together so she deserved all the support I could offer, no matter how weak-kneed or cowardly.

“Sean’s a good boy, Mom. We’ve seen a lot of improvement in the past few months. He’s still loud and hyperactive, but it’s been nearly two months since he bit anybody. That ought to make Aunt Belle happy.”

Janice listened for a moment. “Well, yes, of course it will make Becky happy too. Poor thing.”

Janice listened again for a moment and then said, “That’s improving too. We’ve gone well over a month without any reports of him calling anyone on the playground a fucker.”

Our five-year-old son, Sean, had a moderate-to-severe case of attention deficit- hyperactivity disorder. He was five-years-old and we were considering giving him some medicine, but both his teacher and his doctor had said that as long as we thought we could manage him with behavioral restraints, we were better off deferring medicine as long as possible.

Janice spoke a little louder with a note of impatience in her voice. “Ma, he said it to Uncle Carlo who is a bag man for the Carlucci mob in Cleveland. Words like that are not going to upset Uncle Carlo.”

I could hear the sounds of her mother’s voice through the phone from across the room.

Janice looked at me with tears in her eyes and shook her head. “I just wanted to give you plenty of advance notice that we plan to get there on December 23rd and will leave on the 27th so you can do your planning.”

Janice put her hand over the phone and said to me, “Grandma and Grandpa Richman told my mother that if Sean was going to be there, they were not coming. Same with that cow, Sandra.”

“Janice, don’t cover up the phone,” I heard my mother-in-law scream from the shielded phone.

Our entire family suffered several times a year when family gatherings occurred. Janice’s mother, along with my brother, Stuart, and his wife, Ellen, made little effort to hide the fact that they didn’t like Sean. They kept their distance when he was present as if Sean was wrapped in a cloud of poisoned air.

Every year Janice and I had to find sufficient self-control to answer politely when someone asked, “Are you bringing Sean?”

The first few times it happened we tried making a joke of it. “Well, Mom always makes a ham and Sean prefers food he can smear in his hair and snort out of his nose which is kind of difficult with ham so this year were leaving him home alone so he can make his own Christmas dinner.”

Nobody laughed except for Cousin Bobby, but Bobby just barked a sharp laugh every now and then, spit on his plate, and ran out of the room grunting like a spavined horse harnessed to a heavy load so we never really knew what he was responding to.

Neither Janice nor I found our joke funny so that’s a path we abandoned quickly.

But this time the phone call took a different turn. My wife’s voice dripped with sugar and I heard tones of the Mississippi Delta that she had long ago been erased from her speech.

“Mom, that’s too bad. We’ll miss Grandma and Grandpa. I would be happy to never see Sandra again. You be sure to tell them that we’ll be home on the 27th and they are welcome to drop by if they like.”

Janice listened to her mother and this time I could not hear the words.

“Gordon too? Your cousin Gordon? Gordon, the Gorgon, who arrives an hour early, eats all the appetizers, drinks a half quart of good scotch, then falls asleep in the recliner and snores so loud and passes so much gas we all have to move into the other room just to talk?”

“Yes, mother, I know there is only one Gordon in the family. That was sarcasm. If he doesn’t come maybe I can get a cheese puff this year. And think of how much work this will save all of us with a smaller crowd.”

Janice smiled sadly at me while she held the phone away from her ear.

Janice sat down across from me.

Sometimes the bad seed can be beautiful. Sometimes, in the wake of destruction, we’ll find that we love the madness. – Tyler Malone

Ronald Friedman is a retired psychologist living in Scottsdale, Arizona. He is the author of two books and over 50 nonfiction articles published in magazines and newspapers, but has been writing fiction for only the past three years. His short stories include The New Suit published by Huff Post 50 and Night Orderly published by Bartleby Snopes. Night Orderly won first prize in the magazine's 2013 "all dialogue" story contest.

He credits his mother for his success as a writer. She worked as an assassin for the CIA, and later for the Detroit Mob, so she travelled a lot for work. She supplemented her income by working as a copy editor for the Detroit Free Press. Mom passed away at work about a year ago. Sophie the Dog put two in her head while they were sitting in a stolen '87 Buick Riviera near Detroit City Airport. Nobody's fault. It was just a misunderstanding.

When Friedman went to identify the body, he made three pledges to his mother. He said, “I’ll never write another comma splice, I will always show, not tell, and all my stories will arc higher than the Arch in St. Louis.”