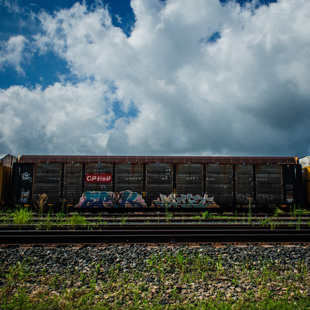 The train rocked her to sleep, though she drifted in and out of consciousness. Her eyes popped open every five-ten minutes with each jerk of the train. Her mind half-registered the beggars, the vendors, the passengers, her father next to her… Suddenly, she was naked. She was standing in the middle of the field, one very much like her grandmother’s in some corner of Uttarakhand that she never wanted to visit. For a moment, she thought she was posing as Rose in Titanic, waiting for her Jack to wrap her in his arms from behind. But then a crow came and sat on her head, only to fly off in a moment. She was just a scarecrow. She could see the green farm, she could feel the bird claws, she could smell the drying crops, but she could not move. She was a scarecrow. Was she stuffed? How could she think if there was hay in her brain? But she was not thinking. She was merely observing. She wasn’t even the scarecrow. The scarecrow had her body, but she wasn’t in it. She was floating somewhere close to the scarecrow body of hers, waiting for someone to join her to the body…

Her father shook her violently. “Aabha! What the hell? How long can you sleep in this din?” His voice went down to a mutter. She tried to widen her eyes as much as possible. She was still in the train and her father was waking her up for dinner. She ate the parathas her mother had packed with pickles, in silence. Train journeys always made her drowsy. She could never sit back and enjoy the scenery of the Konkan. She looked around, taking in her co-passengers for the first time in the last nine hours of the trip. Opposite her sat a lanky boy. He could be called handsome, except that he had a wart on the right side of his face that marred his features. She turned to the window but could see nothing except glowworm halogen lights as the train passed one of the towns on the route.

He was sitting astride her and was caressing her cheeks gently, almost as if he was molding them into something pretty. She tried to return the touch but was repulsed by the huge wart. But she looked into his cheerful eyes nevertheless. He was smiling, leering almost, but made no effort to take off her clothes. He was just there, on top of her. And with a shock, she realized she did not mind. It felt perfectly normal. Finally, she returned his smile. And they kissed, and then it rained.

“Aabha, get up, you dumbass!” She was jolted awake, yet again, by her father. He now had an indulgent smile. “We need to put the middle berth up. Let’s go to sleep, proper sleep. Not your seated sleep.” She nodded. “I can’t understand how you can nod off like this,” he muttered. Aabha looked around. The lanky boy wasn’t there anymore.

She lay down now, on the middle berth, other passengers’ chests at her level, so that she saw chest hair peeping out of the top-button-down shirt of a thin man, the grey hair on a female passenger’s head, the dripping sweat caked with journey-dust on a man’s neck. She was licking it. The sweat, salty and earthy in its taste, felt like the last drop of water on a desert. She wasn’t in the train anymore; she was standing on her knees before a middle-aged man and she was licking the sweat off his chest. Another woman was kissing him but there was no joy of recognition when their eyes met. The man tasted like the salted mangoes from roadside shops. He lifted her and kissed her full on the mouth. To her surprise, she returned the kiss with lustiness, drowning in saliva. She had just begun dressing him when the train jolted to a stop and Aabha awoke. She was sweating.

“We’ve reached our station, beta,” her father nodded at her bewildered face. The sweat-caked man was asleep in the upper berth opposite her. She smiled. How repulsive.

“How was the journey, beta?” Aabha’s mother inquired as soon as they got back home. “I hope no men troubled you. Trains sometimes have the most lecherous of Indian men,” her mother whispered at her.

“And I felt like I was travelling alone, thanks to your pleasant dreams, you bum!” Her father laughed as he brought in the luggage.

Aabha joined in the laughter, a laughter that would appear in her dream later that night.

We should all be so lucky to never know where we sit in others’ minds. Even unclothed, it could be better to still be strangers on a train, because reality may be uglier than how we’re seen in dreams. – Tyler Malone

Namitha Varma is a media professional based in Mangalore, India. She is a voracious reader, a music enthusiast and an opinionated social observer. Her works have been published in Sahitya Akademi (May/June 2014), eFiction India, Coffee Shop Poems, and A Little Poetry. They can also be found at narcissistwrites.blogspot.com.