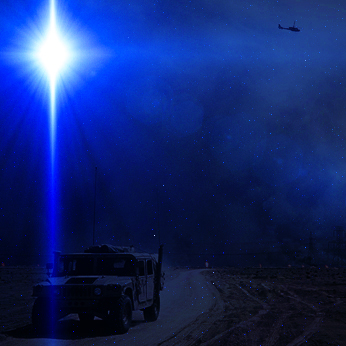 When word from our platoon commander came at 1800 hours saying that orders from Regiment was that we were to be heading out on patrol at 2000 hours, in full battle rattle, none of us were surprised. The Corps didn’t give a squat what day it was. Why would Christmas Eve be any different than Labor Day, Veterans Day, or the Thanksgiving that had passed while we were in this sandbox? The war machine doesn’t rest on holidays. That’s a reality all Marines accept. There’s no time for sentimentality in combat. The scuttlebutt was that the Iraqis were on the move, and their flurry of activity was making Uncle Sam and our allies nervous.

After the SITREP, we ate cold MREs and washed them down with stale water from canteens. We grabbed our packs and gear. Checking mine twice to ensure I packed all the bare essentials needed for a the night patrol: flashlight, toilet paper (taking a crap doesn’t stop for holidays either), gloves, Kevlar helmet, flak jacket, gas mask, MOPP suit, goggles, a few extra M-16 magazines, and of course all the superstitious belongings most of us carried but never spoke about. Mine was a rosary, my old-country Italian grandmother’s.

By 1950 hours we gathered together, aligned in a loose formation, as ready as we are ever going to be to head out into the unknown. A few of us pondered on the whys. Why tonight? Did Saddam have himself a notion to finally cross that border and head into Saudi? Surely the Iraqis were aware what day it was and perhaps they wanted to catch us when we were feeling unmotivated and homesick. There are no cease-fires because it’s Christmas Eve. And surely our enemy couldn’t care less that most of us were Christians and that we saw this eve as a holy one. Will tonight be the night that the four-month stand-off comes to an end? Wouldn’t that be ironic: to be in this barren desert that some see as holy land and have to face the reality that on this night and in this place, we might be fighting and find out who’s closer to God.

The call to get a move out was given. We dropped the talk, got into Marine warrior mode and headed out into the coldest of desert nights. The moon was almost full and all the stars the only playful things in the sky. Our shadows stretched across the sandscapes and our booted feet kept beat on the endless, waterless beach. Keeping our ears and eyes open, we scanned lands for any sign of any life. As I patrolled my eyes kept following one bright star that took center stage in the night sky. As much as I tried to stay focused, because a Marine who loses sight of the mission is usually the first one to die, my mind kept dwelling back to the fact that tonight is Christmas Eve and I am walking through lands that some consider the holiest, watching this glorious star shining. I felt all kinds of peaceful feelings, thinking: If I die tonight, I will be alright. I have peace in my heart. All is right.

My reverie was interrupted by the signal to halt. As I passed back the command and took a knee, facing outward, rifle aimed and ready for any signs of a fight, I could faintly hear, not the sounds of war, but the sounds of music. Baffling. We were about five clicks out from our camp. There was no way the music was coming from there. And as far as I knew, the Bedouins who wander these lands didn’t have a stereo installed on their camel’s backs. There was no explanation I could wrap my mind around. But there was no time after the command was passed back to continue.

As we approached the ridge line of a dune, the music rose. The night sky glowed. Silhouettes of the Marines in front of me in the patrol lit up as they reached the top. I could hear “Silent Night,” a choir singing, sounds of laughter. By the time I reached the top, Marines in front of me were double-timing their way down the dune towards this mirage of Christmas cheer that appeared. From high on the dune, I could see the Marines of Task Force Ripper gathered together around a constructed Christmas tree made of camo nets stretched a few stories high. They forged Christmas lights to illuminate it, along with other odds and ends found around any combat zone, to reflect and shimmer and light the desert night. Off to the side of one of the most beautiful trees I’ve ever seen, were a couple dozen Marines were broke into “O Little Star of Bethlehem.” The smell of hot chow met my senses. It had been weeks since we’ve had the privilege to eat anything but cold MREs. Fond, living faces I hadn’t seen in months of my fellow Marines greeted me. One of our own dressed as Santa Claus passed out “To Any Service Member” letters and care packages. I truly couldn’t believe any of my senses. This was war, but war was all wrong. We were all wrong. Papa Marine Corps and Uncle Sam did indeed care what eve this was!

As I we sat around a fire, relaxed and full of hot food and apple cider, my eyes kept gazing at the one star. And I didn’t much care when the “Gas, Gas, Gas!” call went out and we had to deploy our gas masks. Smiling, I sealed my mask, thinking if I were to die right here, right now, I would go knowing that I just experienced one of the best Christmas Eve’s ever.

Christmas miracles are gifts from miracle workers. Not angels, though, just flesh-and-bone men and women. You and me. You and me can make miracles happen.  – Tyler Malone