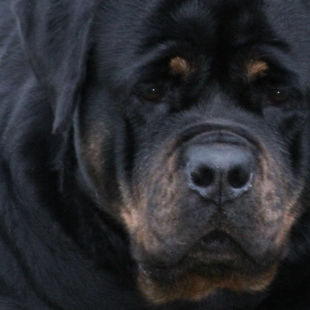 One day a twenty-something white woman was walking down a sidewalk, in the suburbs, when she bumped into an elderly black man. She was startled because this man was walking the biggest Rottweiler anyone has ever seen. “What a big dog!” the white woman said. “What’s his name?”

The man then tied the dog to a tree and told him to sit, and the dog did just that. The man immediately asked the woman to walk a few yards away, and whispered, “His name is Nigga.”

“Hold on!” the man interrupted. “You can’t say that! I’ll explain. Nigga wasn’t originally my dog. He belonged to a white family down South. The reason I know his name is because I used to travel over there from time to time. Anyway, the entire neighborhood abused him, and one day hurt him so bad he was left for dead. Well, I picked him up and put him in my truck, and been caring for him ever since. Now every time he hears his name, it’s bad. He’s unpredictable. It takes every bit of strength I have to hold him down!”

A group of black teenagers went past them, yelling, “Hey, Mr. Free!” (That’s the man’s name) “What’s up, Nigga?” The dog wagged his tail. Then a black twenty-something couple, a middle-aged black man and even an elderly black lady appeared and they all yelled “Hey, Nigga!” And the dog wagged his tail again.

The white lady asked the man, “Why can they say it but not me?”

Then two Puerto Rican men, one heavy-set and bald the other a little younger in a black jumpsuit walked by and said “Hey, Mr. Free” The bald one leaned back, and said, “What’s up, Nigga?” And the dog wagged his tail. The other added, “Man, Nigga’s chilling. He ain’t worried ‘bout nothing. Nigga ain’t worried ‘bout nothing!” The dog wailed his tail.

Then a curvaceous Latino woman wearing a Selena T-Shirt and listening to Puffy jogged by, “Mr. Free! Hey, Nigga!” The dog wagged his tail.

Soon after that, a pudgy Mid-Eastern man drove by in his Bentley, and yelled, “What’s up, Mr. Free? You the best! What’s up, Nigga?!”

The white woman looked even more bewildered. “Now, they are not Black!”

The man shrugged his shoulders, “I don’t know. They took a chance. That’s hard for me to explain.”

“Well, I don’t see anything wrong with me saying it. I was not a part of that family or neighborhood, so I had nothing to do with his abused. Besides, that was way in the past, and he’s surely gotten over it. And for your information, I know this one neighbor who has a Rottweiler and he’s always been nice and playful to me. I’m going to put an end to this double standard.”

The woman marched over to the dog, placed her hands on her knees and leaned over, and said, “How’s it going, Nigger?”

The once-placid and ginormous Rottweiler went crazy. In a black streak he lunged at the woman. She jumped back but it was too late. In an instant, the Rottweiler broke the chains. He put his jaws to her neck and decapitated her.

This incident grew national attention every news channel was talking about it. Al Sharpton and Jessie Jackson jumped on their chariots, and they were all saying the same thing. “Nigga has to die!”

Others rallied to protect this creature. They’re the ones who say Nigga has the right to live, and it was the woman’s fault for wanting to play with something that knows nothing but hate.

The old man pleaded the dog’s case, and said, “Look, I told that hard-headed woman not to say his name. What the fuck was she talking about when she said double standard? What possible gain would she have got? A bank loan? A raise? Promotion? A good table at a restaurant? Hell no! You can’t rationalize and debate when you’re talking about a monster like Nigga.

“There are things in this country that take life on their own: Evolution, abortion, gun control. Nigga’s no different, and it’ll take more than debates to stop them. It takes a revolution, and none of you are ready to do that! Let him live. Let Nigga live.”

The old man lost the case. The authorities went to the room the Rottweiler was held. They were shocked when they saw that he escaped. Now he is out there somewhere, lurking in the shadows. Better watch what you say. That old man? His name is Free Speech, and now it’s too big for him to control. And nothing short of the second coming of Jesus Christ will put an end to him. And like Second Coming, the signs of his return are there, and one day we will all have to answer to him.

Death begins with language. With one word, the world crumbles. If all of existence began with a single breath from a single timeless entity, and we said that we’d take things from there, then collectively we’ll speak up and damn ourselves. – Tyler Malone