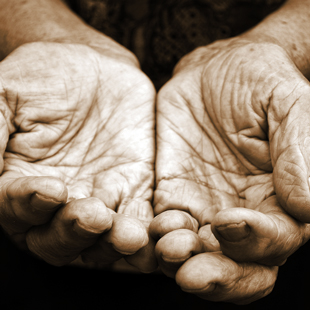 “Sometimes Jesus walked around with a big staff, just like me,” Mrs. Day says to herself as she looks at the frayed picture on her kitchen wall just above the little kitchen table. She cut that picture out of a magazine fifty years ago when she subscribed to Life and Look and Colliers magazines.

“Jesus doesn’t need that staff,” Mrs. Day tells herself. “It was a sunny day in Jericho, the article said. I’ll bet He used that staff to go up in the hills to pray. The Bible says He often left the apostles behind to go away and pray. I’d have kept an eye on Him if I was there.”

At eighty Mrs. Day is legally blind with one good leg. She has a staff of her own to help her walk to stores and then back to her little house. The staff is at least a foot taller than she is. It was a gift from a now dead neighbor who was handy with tools and liked to carve and whittle. Mrs. Day needs that staff this Thanksgiving Day as she makes her way through drifts of snow, an unusual amount for this first big winter holiday.

With nothing in the fridge except old bread and prunes, Mrs. Day hopes to find a diner open. Even Jack in the Box is closed for Thanksgiving so there will be no coffee with a Breakfast Jack to go but Mrs. Day has time today to find one place that is open. And she knows that one place will probably be Vijay’s Diner, where she’s a customer on days when every other place is closed.

Vijay came to the United States long ago when Mumbai was still Bombay. He cooks for everyone every day of the year, whatever God they worship or ignore. He makes fine Indian dishes for customers who emigrated from India as he did. And he makes fine American cuisine for people from the neighborhood, most have yet to adjust to Indian dishes and their redolent spices.

“I have a nice turkey leg, Mrs. Day, if you’d like that,” he says, but all she wants is coffee, two sugars and a muffin to go.

Vijay puts her items in a small brown bag and adds a free candy bar, a Baby Ruth bar, a big one, for later tonight. Mrs. Day will be angry when she gets home and finds it, but that’s okay. She can’t come out at night to look for something to eat. It’s tough enough for her to get around in sunlight.

Vijay waits for Mrs. Day to dig in her big purse and put all of her change on the counter. Then they count aloud together each coin that he picks up one at a time. Finally, they agree he has the right amount even though Mrs. Day has trouble seeing the coins. She can usually tell which are which by the feel of them. Now Vijay smiles at Mrs. Day, his customer on the holidays only.

“Happy Thanksgiving, Mrs. Day,” he says. “I hope you’ll come again. We’ll have leg of lamb on Christmas. And ham and yams on New Year’s Eve. I’ll make you a nice big sandwich. I know you’ll like it. You can skip the diet for one day.”

Come, let us celebrate at the table of humanity this season. All seasons, for everyone. That could be Heaven: putting food into your body while you allow others to live in your heart. – Tyler Malone