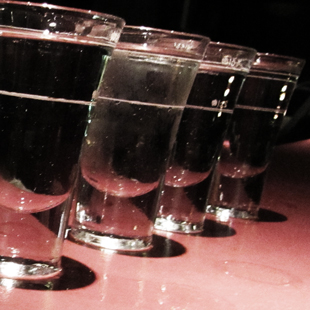 In the morning I woke up knowing that I was absolutely broke, but it was necessary to have a drink. Very urgent. A matter of life and death. I got up, thanking God it was not necessary to dress because yesterday I fell asleep fully clothed. Outside it was very cold and my zipper was broken. I almost froze my balls off before I reached Dawn’s Tavern, where my buddies usually congregate. But fuck, it was empty. Everybody was still sleeping. What to do. I barely scraped some change for a small glass of beer, alone. I tried to talk the barmaid into giving me a drink on credit but she refused, the grated pussy, saying, “I once poured a guy a shot of vodka on credit, but he never gave me money back, since then I don’t trust anybody for any reason.”

Yeah, no luck, I mused, looking out the window at a completely empty, extinct downtown. For the third or fourth day, I really lost the count, people are celebrating a holiday. Probably they got a little tired, finally. Waiting for company, I thought about one summer day when I was without a cent and I felt lousy. Nobody was around to help me out for fuck’s sake. I was hanging around this same tavern for about four hours, bumming cigarettes from the passers-by and hoping against hope that some kind guy would show up. And indeed, my old buddy appeared closer to the evening full of money. We had great time then.

Yesterday was also a lucky day. First, as usual, no money, no drink. Then I met Cossack from Furmanov St., but he was broke too. Yes, it was still early in the day, everyone was probably asleep. At last we met Vakunja on Mayakovsky St. at our favorite bistro. He is a hunter there. Our friend is somewhat sad and has a shiner. It turned out that somebody beat him up at the bistro the other day. When drunk, Vakunja becomes insane and understands nothing. The guy doesn’t watch his mouth and as a result sometimes gets it on the nose.

Vakunja bought me and Cossack drinks, but he himself was short of money and not in a very good mood, even though he smeared with cold cream his black eye. Only one thing pleased him, namely that the Ukraine was finally shut off from the gas. This fact cheered up other friends, whom we met later outside that Pioneer Cafe next to the movie theater. They treated us to some beer. The cold beer made the night frostier. But then someone brought a plastic bottle of cheap red wine for only twenty-nine rubles. We talked and laughed for some time and felt much better. It got a bit warmer despite the freezing cold. Gradually, though, the wine ended and our friends went home. Just Cossack and I remained near the cafe. What could we do? Some other men prone to pessimism might have fallen into despair, but not us, because we are optimists by nature.

So we go along the street, hoping to meet somebody. Then I saw outside that joint on Soviet St. a familiar yellow pate. Nobody else there but Kluger, our buddy, and next to him, as usual, was Bob, Vlad, Nick, and some other friends. I instantly felt a little bit warm and relaxed, even though it’s freezing, under forty degrees, and always Russia.

The guys were celebrating the holiday and asked whether we want to have a drink. Sure we do! What a silly question. Well, Cossack and I immediately dove into the heat of the joint and found our table set up with vodka and all sorts of snacks. At once I put down a glass of the swill stuff, even if I had been boozing for seven days or so and had eaten very little.

Well, it turned out that Vlad sold his flat and now spends all his money on drinks, treating everybody of our warm company. It happens. As for Vlad, he is an insane and unpredictable guy. He graduated from college but he never worked by profession. He said he visited Paris but he didn’t remember anything because he got absolutely stoned on the first day of the arrival and never stopped drinking during the visit.

We sat in the joint pretty tight. If the bottles became empty, Vlad gave money, and someone sitting on the edge of the table would go to the bar for more swill stuff. How nice it was to be in that warm company among friends who understand and treasure you. Now that’s not often the case.

Then gradually the boys began to get loaded. Kluger was the first to call himself a cab because he lives pretty far away from downtown, where we usually get together for a drink. Vlad then began to throw up right on the table. Bob passed out and did not react to bumps on the shoulder and even on his blunt head. He’s not a bad kid, but quite gloomy and gets drunk quickly. Only Cossack and I stayed sober, more or less. Eventually my friend lost his temper, though, when a sucker at the next table said something in favor of Ukraine. They started to fight.

So, we had some good times, once, but no luck today. Sooner or later somebody from our warm company will appear. Soon. To be sure. One hundred percent, sure.

Why are we ever celebrating? Why does it matter, let’s celebrate! – Tyler Malone