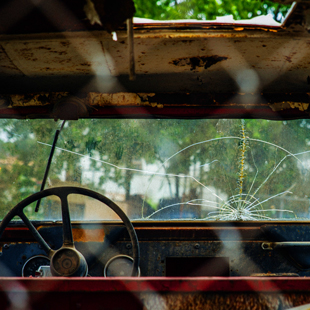 It happened after a night of drink and drugs, licking, sticking, sucking and fucking her way into friendship at a party. Jenny was speeding the streets trying to make it home before her father found her gone. He was always up with the first chirp of an early bird, and her time was quickly dwindling, as the fading moon foreshadowed the sun on the distant horizon. She was almost home when she saw the sirens flashing in her rear view.

Jenny knew the town was over populated with pigs on patrol, and there was nothing for them to do but break balls. That was the general consensus in all small towns. More often than one would think, it was an upstanding citizen who fell victim. Someone who avoided trouble, worked hard, and paid their taxes which afforded for those bastards all the unnecessary coffee and donuts, not to mention, a roof beneath which, at night, they rest their weary egos.

She had always considered that officers of the law were losers with little man syndrome. That they spent the majority of their lives eating the shit that their peers continually over fed them only to attain a badge and regurgitate on the next generation with a sense of entitlement. She never really went out of her way to avoid trouble with the law but often slipped beneath their radar casually waving her middle finger. Not this time.

She pulled off to the side of the road, and he approached her driver side window.

While he reviewed her paperwork she noticed him casually glancing at the cleavage her tight shirt revealed. She couldn’t bear the consequences, so she began to verbally egg him on. She slowly and gradually removed her top allowing her nipples to harden, as the early morning breeze caressed her bare-breasted body. It was the persuasive ace she’d always kept hidden up her sleeve.

Rather startled, the license and registration slipped from between the tips of his fingers while she opened the door just enough for him to slide in beside her. She sucked on his tongue while fondling him over the pants and while, in return, he groped her beautiful breasts, sucking and slurping her sweet saliva, she unbuckled the holster that held his gun. She wasn’t the least bit nervous. She knew she was irresistible, as he slipped his fingers beneath her panties panting like a dog in heat.

Once she enabled herself a firm grip upon the pistol, she shifted and held it to his temple. He removed his fingers from her lap and reached for the sky. He slowly backed away from the car following her vulgar yet precise instructions. She could’ve blasted him right then and there, and just when the overwhelming compulsion to do so began to excite her trigger finger, he lunged forth and directed the shot fired through the sun roof of her car. She was a petite little piece of ass, so his strength was far superior to hers. He forced the end of the barrel into her mouth breaking the teeth she struggled to swallow and pulled the trigger. He knew he had a lot of cleaning up to do but was up for the task. He knew the paperwork was going to be a bitch but knew he could pull it off. He always has and always will.

Get your kicks while you can, any way you can. Do it before someone gets their kicks out of kicking you. – Tyler Malone