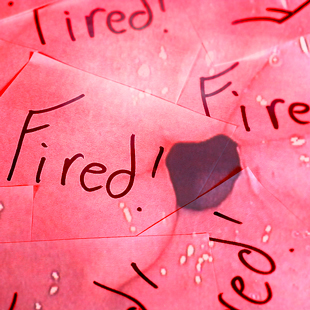 There are lots of ways to get fired. Take today, for example—a call from dispatch that I should attend a nine o-clock meeting. And it’s Friday. I’m not talking about reasons for getting canned—just the methodology, the setup, the protocol. But I’m observant, notice I didn’t say smart, just observant. I watched a year ago in dispatch when Bob S. got called to his nine o’clock meeting. So my antennae were in the up position.

I looked down Randall Road where my favorite laborer worked with the blade and end-loader getting the sub-grade ready for gravel. I would miss him. I told Al goodbye and headed for the office.

Getting called in from the field is one way, but there are others. If you are far away from the main office, let’s say Nebraska, and the office is someplace else, you may get a call from your boss and he’ll do it over the phone because who wants to buy a plane ticket just to fire you? Or if you are in the same general area as your boss, and he’s a gutless type, he also might do it over the phone. It depends.

On a nice sunny day like this Friday, though, it’s pretty much standard procedure to go to the office and get canned. The yard was full of trucks getting sent to different projects when I got there. Did anybody remember that I was the one who started the whole idea of staggering the start times for trucks so twenty of them would show up gradually and not all at one time? I parked and went in. The general superintendent was there plus the new administrative assistant. I knew that look on his face. We didn’t go to the dispatch office, or the superintendent’s office. We went to another spot I never knew existed, beside the owner’s office. He didn’t join us.

“You know what this is about?” the general superintendent asked.

“Me yelling at the truck drivers for getting tangled up in the high-lines dumping gravel?”

“Or me hauling too much dirt off Walkup Road so we had to haul some back?”

“We’re just going in a different direction. That’s all. We’re low on work.”

You are not supposed to take it personally when you get kicked in the stomach and the air goes out of you like a bicycle tire suddenly going flat. There was a protocol in place here. The general superintendent would be a good reference after six years here, so even though he was an asshole, he was an asshole I didn’t want to piss off.

The administrative assistant asked me for my things.

“They’re in the truck,” I said. The radio, the cell phone, the gas card, the toll card.

She looked at the general superintendent. That meant I had given the wrong answer. I didn’t like her, either. She was a large, bloated relative of the owner who had no real authority for anything except maybe make me fetch my things from my pickup truck. I would have disliked her even if she had been skinny.

On the way out, I realized I’d miss my diaries because sometimes, during periods of great frustration I’d write down little sayings, in addition to all the other stuff directly related to our work. I had a couple of real gems from last year, little sayings I wanted to keep. Now I couldn’t. I got the phone, the cards, the radio. The diaries were in the tool box. I got all six of them. I had said goodbye to Al Torrez in less than a minute. I wondered how long it would take me to find my witty little aphorisms.

I found last year’s diary, and went right to the date I was thinking of, a day when the fuel truck went to the wrong job, when the low-boy dropped off the backhoe at the wrong cross-street, when the blade operator came with his own grade-checker and I already had Al, when I got into it with all the operators about how long a coffee break should be, and the general superintendent got on my case because I didn’t wait for him to show up on Plum Grove Road and I went to Martingale.

There were two of them from June 3:

I ripped this page out and stuck it in my pocket, went inside and gave my things to the blimp sitting in the room I had never seen before. Then I went to dispatch where a mechanic gave me a ride home.

When you get fired and you work in the main office, sometimes there are two men that help each other through the process, one sitting behind the desk, another sitting on the desk the way your high school algebra teacher used to do, trying to look hip. There are lots of ways.

I got out of the truck and shook hands with my driver and faced my wife’s eyes from where she stood in the living room, her knowing full well I didn’t belong here this time of day. We’d been here before, though, and we both knew what to do. She would comfort me with a long hug. I would take out my diary notes and look at them and remember that when I had my next job, whatever I did would never be enough. I had just gotten rid of two assholes.

Of all the assholes in the world, each one of us just one more asshole. All others, though, are the shitty ones. With that, you should sit pretty, but if our collective shared asshole consciousness doesn’t get you through the day, just remember what Mel Brooks would say: “Keep firing, assholes!” – Tyler Malone

A bit about Paul:

Paul Smith is a civil engineer who has worked in the construction racket for many years. He has traveled all over the place and met lots of people. Some have enriched his life. Others made him wish he or they were all dead. He likes writing poetry and fiction. He also likes Newcastle Brown Ale. If you see him, buy him one. His poetry and fiction have been published in Mad Swirl, Homestead Review, Literary Orphans and other lit mags.