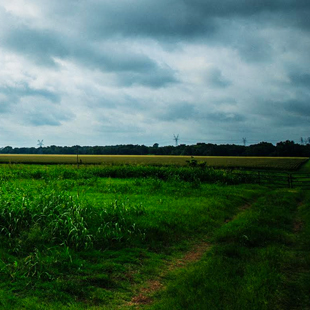 The way you can’t swallow, a thick throat, swollen with the need for a wet drop, that was their country. The hunter left his family to gather supper, a hog to slaughter. The kill would happen early, while the woman and children would pick cotton. The hunter would return with blood on his hands, food for bellies. With death, there’s life.

A grown woman and two girls receive kisses from the hunter, heavy with a rifle, ammunition brass, and a canteen of well water from the cool earth odorous with snakes and spiders. Oily, like worm bellies. As if it’s the taste of gold everyone seems to rush towards with cool veins and hot beating hearts, the hunter sips the well’s canteen but its goodness is blind to the eyes of the maker, washing out his wife and babies.

The hunter always knows where to go. Years of this excursion has left a bald footing which leads to the death fields where creatures feed and breed, only concerned for sharp teeth, never bullets. The smell of wire fences is far off. Control is passed the horizon but closer than most know. Like morning clouds that bring rain, progress rolls, bringing creatural comfort by removing branches, pulling roots, never destroying, only relocating boulders.

The hunter kicks the flowers he crosses and thinks about where the water would collect and flow when rains finally arrive. Moments of isolation bring his heart peace that he feels in his fingers. This is how he wants to die, like a dog: in the wild to be picked clean in minutes, leaving nothing, not a corpse for a cross.

Miles from home, the hunter kills a hog by putting a hole in its heart. Nature scampers at the unnatural sound so nothing sees him lift the corpse to carry it back to his family’s mouths. It’s the act of giants, creatures that walked the earth before the flood: half-god men carrying the destruction to all men. It took the entire sky to kill them. Under the body, the hunter finds full peace, a restful moment, as if he’s under a shade tree, growing. Through heavy eyelids he finds a tree, one that knows the earth’s true story. Against the hog, under the leafy canopy, he sleeps to dream of a world where hogs are brought to him, where heat doesn’t seep through cabin walls and the world’s as cool as a cave painting of permanent red death. But heat magnifies. Breathing becomes impossible. The hunter wakes in the middle of a candle—a world lit ablaze. Smoke moves from back home, so the hunter leaves his kill, his gun and its particles of death; runs to the flames of fallen trees, charred, collapsed deer, rabbits and skunks burned to clumps of eyeless, uneatable clusters.

No white cotton or rough, womanly hands are in the fields, only flames sticking to fibers and renewing its vicious life. The hunter’s home makes the heart of the blaze, a black-red un-beating heap. No bodies, nothing white and alive, but no hope for lungs. The hunter breathes mightily, moving smoke, just so he can see the insides of an immolated cabin. Just to see a slaughtered crib and a clump of something he once kissed.

The hunter feels nothing, no heat, no pain, only a hundred slaps on his shoulders and ears—rain. Storm clouds among hog eye black smoke, their beauty blending into scorched destruction. The hunter with no weapons, no shelter, no living past, sits watching the pond behind the cabin’s corral stones fill to a carbonized shore. There must be rejoicing, somewhere. Somewhere there’s joy. The hunter leaves imprints of his knees in the mud and lumbers into the pond to take a drink. He inhales, head under water, feeling his crown pelted with drops. Though his feet kick, he drinks. The hunter won’t kill. He’s no longer a hunter or a father as he closes his eyes and stares into the charcoal darkness and tries to drink it. He drinks until his bison of a body stops lively functions. He dies, blue eyes staring at rocks growing moss, to awaken in a green world—green and alive from flames, being greeted by women, a child, running ahead of his wife with a baby in her soft, unworked arms, unsigned beauty attached to her face, unconcerned with burden, more alive in death than in life.

From a sleep unsolicited to a sleep unending; all between is nightmare. Death is waking! (This one from our own Short Story Editor, Tyler Malone, shows that even editors succumb to the seduction of words, the tyranny of stories untold.) – MH Clay