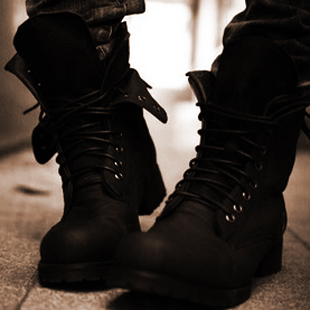 When Joanne DuMont first opens her eyes in the morning it usually follows an intense night of waitressing. She has already slept late (9:30, or so) and relishes her slow mornings to herself. She’d waitressed all her adult life, raised a son (now grown) by herself, and now enjoys her morning to herself.

Her mornings are now free, quiet, calm, all hers. Joseph, her son who still lives at home, is her pride and joy. Twenty-three-years-old, a good kid, handsome, and big. Like his sonofabitch father he’s strapping: six-foot-one and two-seventy-five. And now, since it’s Saturday morning, Joseph is fishing, gone at first light.

Speaking of light, it’s streaming into her bedroom, beautiful, and thick, and warm—the second floor of a small home, her bedroom faces due East. At almost ten in the morning the sun had been up for awhile and has already acquainted itself with the kind of day it will bring. Sleepily, Joanne thinks of Joseph out upon some Michigan lake, one of a thousand.

Don’t bring the Goddamn thing home for me to clean!’ she remembers saying last night, though she knew she would happily cook the Goddamn filthy fish.

“He’s home!” she actually says aloud to her empty room. Not fishing at the crack of dawn but home…

The footsteps return, going the other way, back toward the kitchen. Boom, boom, boom. Joanne thinks that she should be smelling the aroma of breakfast. Unmistakable bacon complemented by unmistakable eggs. There was no aroma, just falling feet.

Once the footsteps stopped Joanne was acutely aware of the silence in her room. Thick, heavy, dead silence brought to life by sunlight so bright that it was suddenly alien, different from every morning. She was aware of such a thing, then it passed to quiet.

Her thought was to call out to her son; make sure he was home. She does: “Joseph!” in her strong mother’s voice, and nothing answers, the reply contrasting her voice with the silence of the her room, the entire house…

From completely out of nowhere heavy footsteps come up the hallway toward her room. Boom, boom, boom! To the point where she mentally saw her son’s six-foot-one frame, his handsome Dutch-Irish Jovial face. But they stop at her door. Nothing knocks or calls to her. Nothing enters.

Now, Jonanne DuMont is scared. “Joseph! Really, is that you?”

The least of her worries is that she still has to pee. The urge is stronger but it isn’t paramount to fear. She didn’t have a gun—doesn’t believe in them—and was in a second-story bedroom, so she has two options: bust out the window and jump or call 911 and wait ten minutes for the police.

The footsteps walk familiarly down the hall, away from her bedroom. Boom, boom, boom!

She reaches for her cellphone on the nightstand. It’s not even a smartphone, it’s a flip-phone that’s lived a long, useful life. A gift from her son, in fact. And at that moment the phone rings.

She was not startled, but completely surprised, actually unable to move; aware her body was thick, with paralysis, at the faintest thought of help, from the outside world. She flips the phone open and holds it almost helplessly to her ear.

“Joseph,” she says as if she’s stumbling blindly, only with her voice. “Joseph, you’re not home?!”

“Nah, I been fishin’, since six o’clock. Dylan caught two already! I been sippin’ beers, waiting for something to come.”

At these words Joanne DuMont relieved herself of a neglected bladder. Urine pulses out between her thighs and down the side of the bed. She drops the phone to the sound of Boom, boom, boom! Going with total familiarity.

Our world is full of sunrises and horrors, and both of them wait to seep through your doors and windows, and no locks or blinds will keep them back. – Tyler Malone

Ralph Freda is a sometimes writer. Currently in love with the written word...He is 42 years old, currently living with his parents- the most beautiful people in the world- who have taken him in following a debilitating event.