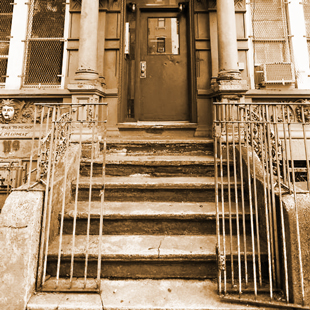 “I dream about you a lot these days,” I say to my dad.

“And for some reason I show you up in your dreams,” he responds, laughing.

It doesn’t feel like I’m dreaming. His voice is clear. The wisps of his grey hair are fine and crisp. I see the individual strands layered on top of each other. I always forget that I’m dreaming until he reminds me. He seems so real.

“I think it’s because I’m getting older that I dream more of you. Not to mention that stress makes me crazy.”

“You have no idea the stress I had, no idea about being in debt and watching my family suffer.” His face looks sad and heavy. “A gambler can’t help himself.”

“I know, I think about it sometimes. I can’t believe you were able to take it.”

“Your mother was angry and she had a right to be. We were the only white people left in the projects. I ain’t never had nothing against black people, but even they didn’t want to be there. If living in the projects wasn’t bad enough, we were kicked out when they found out your mother worked. It could have been so much better.” Then he looks at me. “I wasn’t there for you.”

“You were there for me. We got out of the projects and I went to college. So much of what I’ve done is because of you.” What have I done? I wonder as I’m saying this.

“I could have given you more.”

“You gave me a lot. You gave me your attention and time. You were always home; in fact, you hardly went out,” I say laughing a little. “For a gambler in debt, you were home a lot.”

“I know, it’s not,” I say. “You gave me Sinatra. You taught me how to love music. And you showed me how to respect women.”

“Do you know how beautiful your mother was when I met her?”

“You told us all of the time. I hear you in my head when I tell my wife she’s beautiful.”

He pauses at what I’ve just said.

“You know some men are millionaires and beat their wives,” I say.

“How do you know?” I ask. He ignores my question.

“I tell Theo about you all of the time. He feels gipped,” I say.

“You can’t blame me for dying.”

“You didn’t take care of yourself and you worried yourself sick.”

“Are you going to lecture me now? I’m dead already.”

“When you were alive, you had two grandchildren. After you died, there were eight more. I have two kids now.”

He smiles, shaking his head like he knows this already.

“And Frank became a millionaire. You could have borrowed a lot of money from him,” I say.

He looks angry. “I wouldn’t have borrowed money from my son.”

We look at each other knowing he would have.

“I need you now. I need to talk to you about life decisions; I need your support.”

“I can’t do anything about that. Do you think I know what this is all about?”

“I’ve always remembered that dream. I had to be about eleven,” I say.

“We’re more similar than you ever wanted to admit.”

“You’ll soon be dead longer than I knew you when you were alive,” I say.

“You’re more real in my dreams than you were when I was a kid. I can talk to you as a man.

“There’s so much I want to tell you,” I say realizing I’m telling him. “Remember that store you used to take me to on Grand street, the one where Eddie worked? They sold Italian music and Neapolitan coffee pots?”

“It’s still there. I go there now and play guitar with the owner’s grandson.”

“Ernie?” he asks. “I told you that you’d grow up some day and like that music.”

We look at each other silently.

These are the days of the living, but also the dead. Never forget about either one, so spend time with a phone call or a memory. Either way, spend time with love. Do it now while it’s still up to you. – Tyler Malone