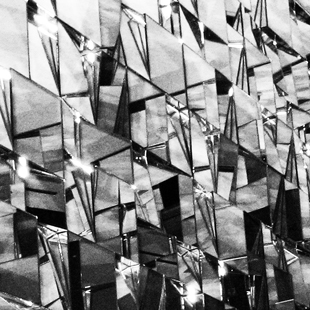 They had the kind of house that looked like no one lived in it. It was a beautiful three story brick home with a brilliantly polished wood staircase curving down the middle. Each piece of furniture in the living room was positioned too far apart from the others, as if to avoid confrontation. On the coffee table a photo album sat precisely in the center. The cover photo was of a boy and his Golden Retriever running on a black and white beach. I assumed it was the picture that came with the album. The rest of the book was empty.

There were too many mirrors in the house. I saw on a design show once how mirrors can be used to create an illusion of space. Being simple minded, I am often been fooled by such things, especially in Chinese restaurants. It really is embarrassing when you almost walk into yourself holding an empty plate, only to discover the buffet and all of its greasy Americanized fare is behind you, and so is everyone else. The house was trying too hard. It didn’t need to create an illusion. It was what it was—the home of a terminally ill woman and her grieving husband.

I remembered that I forgot to ask where I should park and realized I had blocked a car in the driveway. Rushing outside, my footsteps created an echo. Outside, her husband sat behind the wheel of his Mercedes staring blankly ahead. My old beat-up Nissan had him blocked. He was just sitting there staring at my car, an obstacle, immovable and impossibly dense in the universe. I moved my car and gestured a sorry, and then he drove away. I wondered how long he would have waited there. He came back one week later. While he was gone his wife threw a cordless phone at me and complained that I didn’t know how to properly fold towels.

By the time he pressed me against the kitchen counter and smashed his mouth somewhere near mine, I had already decided to let the agency know I was leaving. My interview with the hospital went well and I was scheduled to start in the Emergency Room in the next week. Pulling away, he mumbled an embarrassed sorry and then turned and disappeared upstairs. From the bottom of the stairs I could hear her.

“What took you so long down there?”

“Nothing, I was getting a drink.”

“Did you see the towels? What a mess.”

“Oh, I guess I left it downstairs.” Then silence. She didn’t believe him. The only time she stopped talking was when she smelled a lie.

I mixed it quickly, the pineapple-orange juice, the vodka and precisely three cubes of ice, and walked upstairs.

“You left this down there.” He hid his relief and thanked me. After that night, I never went back.

Around here, we embrace madness. We claim to be the maddest of all, actually. Some, though, are madder than we can ever be. And they’re what we never want to be: mad enough to where our only saving grace is the sane people we unknowingly punish just by living, just my being mad. – Tyler Malone

"I am a creative writing student. My poem Easter for Agnostics appeared in MadSwirl's poetry forum in August of 2012. Other work has appeared in The Rusty Nail and Curio Poetry."