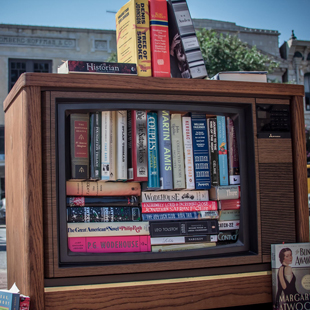 His eyes were clouded with something. It was only on closer inspection that she realized, feeling a pang of something unidentifiable in her chest, that it was tears. His hands were shaking, but he still held the brush with undeniable skill. He dipped it slowly in the paint and brought the blood red tip to the canvas. She watched as the tragic ragged line created by the strokes curved and bent, seemingly haphazard but in reality infinitely precise. It was the inevitable result of a terrible skill, more than once he had deemed it a “curse.” She could never be sure if he meant that the art itself was a curse or if the truth of the curse lay in the way it had betrayed him—leaving him full of the cosmos and everything, pregnant with ideas, but standing across from the blank canvas feeling his wrist slacken and fall limp, useless at his side. In his likeness was the image of a benevolent creator, the god that would have birthed the world, but instead it grew sour in his belly. He stood there mute, wondering if the real story of creation presupposed the destruction of its creator; he envisioned an old god, sick and sallow faced, skin stretched taut before finally bursting from the fullness of his creation ready to be born. It was that image, that feared premonition, along with others of numberless sorrows that would take him to the bar, to the stool, that stool in the corner where he’d drink gladly to his own oblivion.

And then she came in. The full flower of youth, an undeniable beauty, though it was only her eyes he saw, blue and clear, the color of hope. And so he let himself fall, into her rose-colored world, into her arms. And it was a different kind of oblivion. On some nights, after they would make love, he would get up and go outside to smoke a cigarette, finding a nameless sadness in the shapes of smoke reaching towards a bloated moon.

She had come to him today full of hope and faith, for him, for her, for the world, for who knew what. She clutched the paints in her hand like talismans. She had come to exorcise the demons, to sprinkle the holy water. She laughed a light airy laugh that broke his heart a hundred times.

Show me how you paint.

He watched, shocked, as his arm lifted, as if held by a ghost, and received the brush. Perhaps it was her face lighting up or perhaps it was that his arm was already lifted that he suddenly felt the inexorability of this fate. As if he had already painted it. The fear vanished, he was a man trembling; his fear was now replaced with awe, at the face of death revealing itself to be friend rather than enemy. So he painted, the tears streaming from his eyes mixing with the precious pigments. He saw the canvas transform, it was as if it was his own face in a mirror. It was then that he knew it was his last work; the awful task of creation was over.

She stood back a few feet watching him filled with pride. She had done it! She had made him paint again, just as she knew she would. But her pride was quickly forgotten as the tears began to fall, and she worried, briefly, that she’d committed some awful act. She watched spellbound as the canvas filled. He turned to her the gravity in his voice making her speechless,

This is for you.

And though it was a gift, it felt like an empty offering, a bag of beans. Again she wondered if she had done something wrong, but this faded almost instantaneously as she beheld the finished painting unlike any other she’d seen of his, but somehow seeming to be the one truest work. She could barely speak.

He didn’t respond. He got up from the chair turned away from the canvas and the paints, and the woman, without ever looking back. It was a lightness that held him now, a peace—if that could be found in such a soul. He walked inside, sat down on the couch, and turned on the TV. He laughed that night at the jokes, really laughed for the first time in years. Somewhere out there were his canvases, holding more of his dreams than most people invest in their children. He no longer cared for them or their fates; it was as if they were now alien to him. That night when he passed by the one she had hung in the hall last year he felt nothing, the lines and the colors, which had once been full had inexplicably been emptied of something unidentifiable.

Tuning in is more than what’s planned and arranged and scheduled; tuning in is hearing what you don’t plan on catching: something whispering, something as light Boss Ross’ paint strokes, something that lets you know that you could have something called a soul. If not, just change the channel, you’ll find something pretty to stare at until permanent blackness. – Tyler Malone