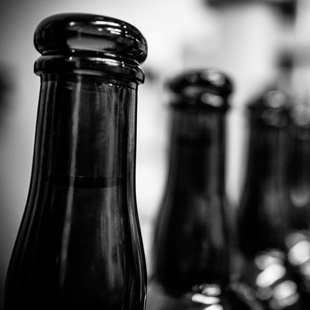 On Independence Day we sat with a former translator Phil in the park near the bronze deer. Soviet soldiers brought it from Goering’s hunting ground and gave it to civilian children.

Phil quit translating right after the last default, then worked as a guard and drank like a pig cheap counterfeit vodka called Freedom.

We sat, drank Freedom, and talked until we smelled an aroma of the expensive perfume. We raised our murky eyes from vodka on the bench and saw a group of officials led by the governor himself. They were passing us quickly by, looking at us disapprovingly. To celebrate, we began spontaneously throwing up in the most insolent manner, praising Freedom, the best among the cheap alcohol, but then it was too much of a good thing.

And what about the officials? Everything’s all right. They briskly passed us by turning their noble noses away in disgust. Only a stout cop, a colonel, ran up to us and made a remark, like we should be more careful. We told him in chorus to fuck off.

We soon finished our Freedom and had to take another bottle. And when we were returning to our bench I saw a former KGB major sitting at the bronze deer. Some years ago he was after Phil, and now he is a dirty bum who searches for food in the garbage. He is a real goner. In the park he collects empty bottles and then buys stinking moonshine and drinks till he passes out.

I came up to the bastard and without saying a word, hit him hard in the odious mug. The bum did not even twitch.

We drank our Freedom and watched very young girls near the fountain drinking canned beer and cursing loudly, as if openly defying society.

Some ragged fucker shouted, “Fucking Russia!” I noticed that in place of the notorious soviet asshole who sucked off the system came the fucking Russian citizens dissatisfied with the government.

But our celebration continued and gained momentum.

A well-dressed kid walked up to the bar’s stall and, not wanting to wait for the seller, slammed his fist into the glass. He took a bottle of beer and calmly walked away next to a tall policewoman with a long club in her belt and a silly smile on her fucking mouth was dragging a short drunk on-duty cop. Three stoned youths in the new Audi crushed into a concrete barrier. All three of them are instantly dead. Near hotel Russia a killer is taking his time aiming at a businessman coming out of the jeep full of sluts and money.

Only now is the festival in a full swing. The crowd, drunk with Freedom goes crazy. People throw stones and fight the riot police. They set some cars on fire. I broke the window of a fashion boutique Lady Hamilton, the hostess of which had recently humiliated me.

Some unknown young guys calling themselves The Left Demons vigorously chanted: “Kill the skins, just don’t bullshit us! Save Russia! ”

In the evening I met in a dark alley a businessman in an expensive suit, and cut it all to shreds with my knife. I would’ve blown up some mansion, but I did not have a single gram of TNT on me.

I woke up in the morning at a tram stop. Gloomy citizens were hurrying to work, barely remembering what happened yesterday but knowing what Freedom was. I looked at myself. Oh, fuck! No jacket, no shoes, no Freedom. So I went home barefoot.

Mother Russia has the face of a harlot or an angel from heaven, it all depends on how much freedom you’ve been drunk on your whole life. – Tyler Malone