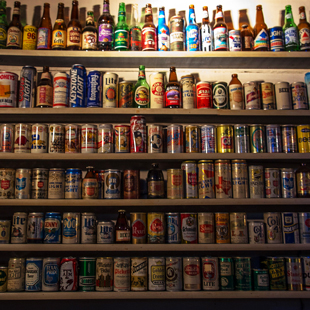 Coming into this place, it was like I was dropped from another planet. Fruit picker at 2 ½ cents a pound of strawberries, bar room musician, block buster scholar with academic title for recommendations needed by anxious friends, dishwasher at $4.60 an hour, resident scholar of the illiterate in the slums.

Then I decided to read poems in bars.

I was standing in a bar one night on Cortelyou Road and Stratford Road. The place, Jimmy Ryan’s, had a sign above the door that intersected at the angles of these streets. Two guys got off the bandstand. They had sung two original songs. Then it was going to be time for the next act.

“A Confederate General from Big Sur, The Abortion, In Watermelon Sugar, The Hawkline Monster, Dreaming of Babylon, The Pill Versus the Springhill Mine Disaster, Revenge of the Lawn, Trout Fishing in America, So the Wind Won’t Blow It All Away.”

“You read all that stuff?” the guitarist asked.

“Yeah, the three volumes, bound collections of all nine pieces, just recently. So what a coincidence it was, meeting you guys in this bar who titled their band after a Richard Brautigan story, “Pacific Radio Fire.”

“I’m surprised you would have heard of him.”

“Is this going anywhere?”

“Oh, I’m sorry,” said the guitar player. “I was referring Tracy to something else.”

They were standing by the ledge, a few feet across from the bar area. A waitress was serving at this ledge, though the bar was only a few feet away. These were some of the observations I was making as a denizen of the bar culture.

“I’m Charles Bukowski,” the freestanding guy said, “and why are you reading Brautigan?”

“We might ask you,” said the drummer, “why are you reading him if you’re dead?”

“Well, that’s another story. I’ve come back for a little mission,” the freestanding guy said. “Would you like to hear about it?”

“Sure,” the two guys stated in unison. “It’s not often we get a chance to talk to members of the dead, especially since you are the grateful dead.” These are some observations I was making. The two laughed. They were in on this humor.

“Yeah,” said the freestanding guy, “recently somebody pulled me up in some transmigration thing, maybe they confused me for a Hindu or for a period in history where this stuff is more believable. But I moonlighted for a dentist instead of my current job as a dead writer.”

The place was silent as the hostess was adding microphones to the stage.

“I did OK pulling teeth, doing extractions, worked one day. By the afternoon the alcohol came on to me. I assaulted the chief dentist in a Hollywood office of four, and they had to let me go. I did a good job, considering I had no training. Then I drank for two days.”

The two guys just stood there, the Richard Brautigan guys.

“Anyway, this is my last night before they’re gonna take me back, under the rocks, where the ants crawl up my empty arms and the worms eat my flesh remains. It goes slow, you know.”

“Well, we like your poetry, too,” the drummer said this time.

“Yeah, that‘s right,” they said together.

“By the way,” the singing guitar player said, “how did you read all those books recently like that if you were dead?”

“Stranger things have been done before.”

Just then the next act came on. I couldn’t hear the fellows chatting. Just a quick conversation remained as the hostess set up the final mics for a fuller band with more voices and guitars.

The five-piece soul band started to play. That was it. The guy walked out, Bukowski or whoever that nut job was. Pacific Radio Fire stood around and listened to the next band play Aretha Franklin numbers, Chain of Fools, Don’t Play That Song Again. R.E.S.P.E.C.T.

And so, there are bars for the daring of the night.

Then I left too.

And that’s what you see. The wild cherry cocktail sticks inviting adventure. Bars give you relief from the ordinary humdrum.

In front of the club, I lit a Marlboro cigarette. “A band named Pacific Radio Fire…” I inhaled, exhaled twice. “And who thought people under 25 read Richard Brautigan again in 2014?” I took another drag, staring at headlights, considering the possibility of Bukowski’s transmigration. I was pretty drunk, and maybe the whole thing happened, or maybe it didn’t happen at all.

Then I flipped the cig high in the air watching the yellow, glowing arc spin.

We are all Charles Bukowski, living long, dying quick, only to live on again, or so we hope. But soon, once we breathe in all his body’s wandering atoms, we’ll all have a little Bukowski inside of us, just like Issac Newton, just like Mr. Rogers, just like Jesus. – Tyler Malone