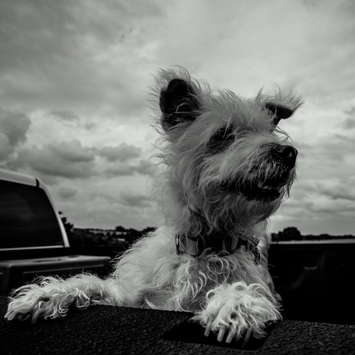 Sheila, my dog, used to be a very fine dog. She was quiet, well behaved and a gentle companion. She’s a Toy Australian Shepherd, 15 inches tall and 15 pounds, with no tail to speak of and a fondness for chasing rabbits. For a few years I really did not believe that any finer dog ever existed.’

So you can imagine my chagrin and dismay when she converted to Islam and transformed our happy home into a place of strife and disarray. I blame myself, really. I should have known what was happening months earlier. I saw the small tell-tale signs of impending conversion but I failed to connect the dots and see where these unorthodox behaviors were leading. I simply missed the larger picture.

For example, it was about April of this year when I first noticed that she had pulled her small napping rug over to the east facing windows near the front of the house. At regular intervals, about six times a day, she would go over and kneel on her rug. Well, she didn’t exactly kneel down, but with her butt up in the air and her chin on the ground, one could unhesitatingly say that she was observing some sort of ritual. A day or two later, she adopted another strange behavior. She would take the antimaccasser from the arm of the davenport with her teeth and drag it over her head like some sort of veil or shroud. She nipped at me when I tried to remove it. A sort of puppy chador, but I was too absorbed in my own daily work to realize the significance and obvious import of this seemingly innocent prank.

When she was younger she used to get very excited whenever she saw Lassie on television, and she and I would often sit together in the evening and both get a kick out of the mercurial little Meerkats on the Discovery Channel. But now she began avoiding watching television with me completely, unless there was a scene in a movie with a bleating goat getting its throat cut. Instead, she began watching slasher movies with my wife on Splatterdays.

Her love of chasing rabbits disappeared rather abruptly and she began sitting up on a high rock in the back yard and howling or ululating in a weird high pitched voice, as if calling the faithful to prayer. She would run into the room if President Obama was speaking on TV and stare at him adoringly. She would no longer answer to her name unless I pronounced it Shee-Lah.

The situation rapidly deteriorated. She began refusing bacon strips and pork chop bones. One morning she jumped up onto the kitchen table and ate all of the couscous that I was preparing for the evening meal. She started craving dates and figs and would accept nothing else for a treat.

But, as I say, things got worse. When I went out to the back yard this morning I saw that she had eaten two of my grandchildren; not the ones I like, fortunately. And then early this afternoon when I arrived home from work, she was watching a rerun of the Hound of the Baskervilles. She drooled at me suggestively as I entered the room.

So now, here I sit, locked in my upstairs den, unable to leave the house. I believe she must have declared some sort of Fatwa on me because every dog in the neighborhood is after me. I called the police but they cannot help me.

“What do you expect,” the desk agent asked me, “when the democrats are in power?”

But I do have a plan in mind. While all the neighborhood dogs are performing their evening prayers, I am going to sneak downstairs and turn on Al Jazeera. While they are all absorbed in watching the beheadings, I can make my escape to the prairie where the coyotes remain Pagans.

When things change, when who we love isn’t what we remembered loving, what do we tell ourselves? We say they’ve gone astray. We call them disgusting; we call them Gregor Samsa. We say they must have embraced heresy, because who want to live a life any different than ours? Only the brainwashed wouldn’t want to lick our faces anymore. And we always sing that same song, too: “We hate what you’ve become, and we say that with love.” – Tyler Malone