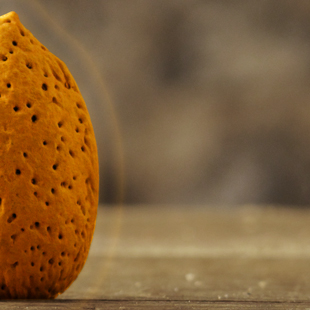 One time when I was fourteen I was baking some cookies. I think they were some sort of vanilla cranberry shortbread cookie. I was very proficient at baking.

The recipe called for two teaspoons of vanilla extract, but I wasn’t looking when I pulled the dark brown glass bottle out of the revolving spice rack in the cupboard, and as I was pouring it, my hand slipped and half the bottle’s contents spewed out into the mix below. The stinging smell of almonds wafted up and assailed my nose like a physical blow. I was horrified. It reminded me of the time that I tried to make old fashioned yeast bread but the yeast didn’t take and so the bread was harder than steel. I was reminded of this fact every year when my brother would jokingly re-gift that very same loaf to me for Christmas. But I baked the cookies anyway, while the acrid smell of burnt and bitter almonds seeped slowly out of the cracks in the sides of our oven and permeated the air, smelling like mistaken identity and defeat. Ever since, the mere smell of almond extract was enough to make me feel nauseated.

And now I was smelling it again, that sickly sweet almond smell. Who was stupid enough to think that the taste of almonds was appetizing enough to make concentrate out of, anyway? And what the hell kind of funeral parlor smells like almonds?

I approached the closest flower arrangement and inhaled deeply. The lilies, ferns, and white roses each greeted me with their own appropriate fragrances, but I did not find the culprit among them. Skirting widely around the closed coffin in the middle of the room I approached the other bouquet, holding a slightly different assortment of flowers, but no luck. Perhaps it was just the parlor itself.

“Do you smell that?” I hissed in my mother’s ear. She turned and looked at me with wide, unseeing eyes, and I knew that she hadn’t heard my question. She hadn’t heard anything, since he had died.

I was afraid to go near the coffin, even though the lid was closed. I knew I wouldn’t see him, but maybe I would feel him; feel his presence, feel the warmth of his embrace as he called me his little girl. His little girl, the words I would never hear again in my life.

I wasn’t little anymore. It has been two years since I had earned my bachelors, but like the almonds, there are things you just can’t forget.

I approached the coffin anyway. I had seen people looking at me, talking quietly to themselves. They were my parents’ friends. People whom I haven’t seen since high school. All of them looked vaguely familiar, but at the same time, they were all complete strangers. They were looking, they were talking, because I wasn’t the girl I was back then. I wear black and I have a small stud in the side of my nose now. I had stopped passing out flyers about the next book club fundraiser, I had stopped being the homecoming queen. And they were wondering if that was why I was afraid to approach my father.

I walked quickly to Dad’s coffin and put my long hands on it. My mother had always wanted me to play piano, but I had picked up a pen instead. The wood of the lid was dark. I hope it’s not almond, I thought bitterly to myself. Do they even use almond wood in carpentry? To make sure, I took a quick sniff but no, it wasn’t coming from here. The wood was shiny, I could practically see my reflection in it. And smooth, my dad would’ve liked that. He was always a smooth guy.

I breathed deeply, not for almonds, but for myself. I breathed in one of the last breaths I would share with my dad, the last shared space. I closed my eyes for a moment. I remembered that night. Driving through the icy rain and the nighttime blare of tired radio hosts, racing home, my tires screeching on the familiar street where I learned to drive. I held my mother close as she screamed and cried and told me the story in jerks and sobs. Drunk driver. Car crash. Hydroplaning. Interstate-5. Coming home. Not coming home.

Whenever we saw a poor wayward cat or raccoon sprawled out on the side of the road, Dad always used to say the same thing: “Don’t worry, baby, it’s just sleeping.” I was a child; I believed him, smiled with contented security. It wasn’t until much later that I recognized the sight of death, and that he had lied. He had been trying to protect me from things I didn’t yet understand. He recognized that my heart was sometimes just too goddamned big.

I opened my eyes and walked away.

The wake was coming to a close, so I gathered my mother’s jacket and my own and headed out to the car. It was a 2005 Jetta; the car that my parents had given me upon high school graduation. I had a special affinity for that car; we had been through alot together. I put our coats in the back and waited for my mother.

Death, it should scare you. Sleep doesn’t, I’m sure, even though sleep is the cousin of death. – Tyler Malone

Pattie Flint grew up being shuttled between Singapore and Seattle. As a result, the closest thing she has to home is her beloved beat-up car. She spends her time as an editor at Bitterzoet Magazine, Medusa's Laugh Press, and as guest editor for Chatsworth Press. This keeps her pretty busy, but she still has time to weep for peeling paint, boys' wrists, and the miles to go before she sleeps.