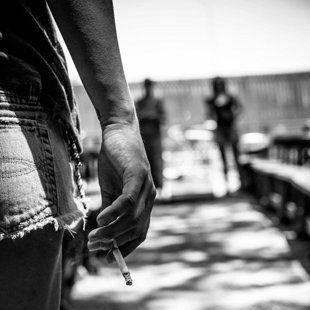 “Make less noise,” said the hotel owner, somewhere between a request and a command, while I walked up the stairs to my room. His near shout left me befuddled. But I most certainly sensed aggressiveness in his tone, something I had probably earned during my three day stint at the Hotel whatever-the-fuck it was called. I made my way up the narrow and steep windy stairs to my room. It was on the top floor.

“I went to get cigarettes, remember?”

“That was at least two hours ago. What the hell, Austin?”

“Calm down. It wasn’t two hours. Here’re your Luckies.”

“Don’t tell me to calm down! I am calm! Jesus, would you look at the picture on the back of this box, it’s horrible.”

“I know. Those pictures are gross. They think it’ll make you not want to smoke, but it just makes me what to smoke more in spite of those anti-tobacco assholes for putting a picture like that on ’em.”

“It definitely sounds the strangest.”

Had it really been two hours? There’s a non-stop sex cinema on Sunday nights and the bearded old man in the ticket booth didn’t say a word, just greeted me with a smile. I only went in for a peep, but I must have stayed there for a while. I blame it on the hash. When it costs more to do your laundry that it does to get high, one’s priorities tend to change.

“Anywhere. I gotta get out of this hotel room. I’ve been here all day. The walls smell like piss. There’s no AC. I’m leaving. You coming?”

“Lola, I love you. You’ve got the most amazing tits.”

She slammed the door behind her and pounded the stairs with her boots as she walked down them. I could hear the owner’s thick Dutch accent yelling in exasperation, and Lola responding “Shut up! Where was the complimentary breakfast the past 3 nights, huh? Fix me some fucking pancakes or I’m gonna make as much goddamn noise as I please.”

“Breakfast is served till ten in the morning. You wake up at noon.”

My bed had wheels on it which made it roll around the room until it stopped at a corner. And I had no pillowcase. So instead I lied down on the carpet floor and began to jerk off to the woman from the bread store. I liked the way she spoke English. She gave words unexpected inflections, and it sounded sexy.

I thought about the sailing dog I’d seen earlier that day, navigating the boat with a wave of his nose, so happy and free. He reminded me of a book my father would read to me called Skupper the Sailor Dog. Every page of that book was clinging to its threads. The cover was hopelessly bound by yellow masking tape, and it looked like a craft project that an ungifted kindergartener brings home from school.

I managed to sleep that night uninterruptedly and without the aid of sleeping pills for the first time in what felt like a while.

I blame it on the hash.

The skull and bones make us want death like it’s as sexy as anything on two long, sexy legs. Death becomes something that you want to dip your tongue and body into, just ask any artist that stares into the void and hears her speak back. Beware of how you choose to die, though: the pills, the people, the sleep, those are what tear you down until you become what you say fascinates you the most: a skull and bones. – Tyler Malone