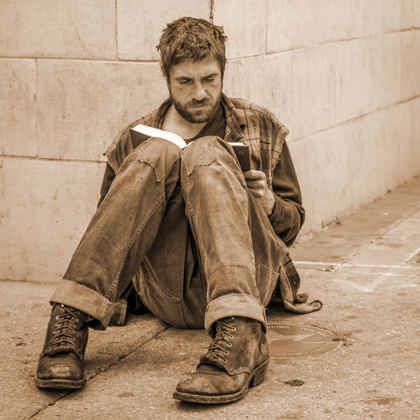 A random hardworking man punches Friday’s clock, wipes the grime from his brow, walks toward his ’84 Ford Ranger that’s in desperate need of a tune-up. If I choose to rob him for his easily forgeable paycheck and whatever pittance happens to be in his wallet at that moment, would the karmic scales be balanced if I were to donate half the money to Jerry’s Kids? Or would it be best to blow the dough on a twenty-buck BJ from a hooker with two kids?

I don’t exactly have Friar Tuck within my ranks, if you catch my drift.

The lower middle class has less expendable money to spend on home alarm systems, monthly identity theft security, and private bodyguards. I’m a bit more impoverished than they are, but also an opportunist (Pops used to say I was a real “go-getter”). Additionally, I have become hopelessly addicted to gourmet coconut truffles, and have you seen how much those babies cost? Ridiculous!

So here’s my current dilemma.

Do I live a lucrative life of crime, occasionally devoting my earnings to a chosen charitable cause, or do I set my sights higher and figure out a way to impersonate a trust fund baby to earn my meal ticket?

Humanity, we work hard (damn hard!) to have to not work at all. Robin Hoods, though, those guys live to die, and not just get by. And that’s why you don’t know a Robin Hood. Sure, you might see them shining, magnificent and short, because when you burn the candle at both ends, it gives off that magnificent but brief light. – Tyler Malone

"I am currently pursuing my MFA in Fiction at San Diego State University. I also run a blog called Subvertbia, which features some of my short fiction and poetry. Some of my recent publications include a story for the “WTF?” issue of the online journal Penduline, and a story for a print anthology titled "Enter at Your Own Risk: Fires and Phantoms." I also participated in a collaborative text called “Art-Making in the Technosphere” that will be published in the upcoming edition of Fiction International; this text has been nominated for the AWP Intro Journals Award as well as the Pushcart Prize."