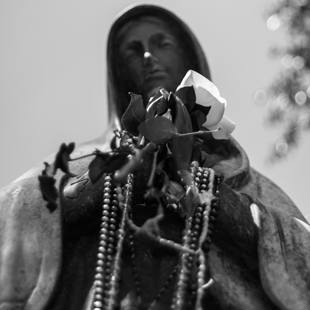 I found a new thrill in the summer of 1968. I compiled a list of New York cemeteries allegedly haunted by ghosts. Then one afternoon, I drove upstate in search of Scarlet Hollow Cemetery in Freaksburg, New York.

I got lost a few times before I arrived in Freaksburg. When I found the town, I parked my car, went to a local gas station, and asked a teenage boy at the register for directions to the Scarlet Hollow Cemetery.

The kid told me he had heard of the cemetery but didn’t know how to get there. He showed me a map. It looked like Scarlet Hollow Road was near Freaksburg Road. But first I had to find Freaksburg Road.

“You know how to get to Freaksburg Road?” I asked the kid.

I wanted to slap him around a couple times. But I glared at him and hissed: “Thanks, kid. You’re a real sweetheart.”

He jumped back. He saw that evil look in my face and knew he was in trouble. I thought of cutting him up right there and then. I didn’t.

I scurried off and muttered to myself: “Welcome to the Twilight Zone.

With a large backpack on my back, I continued my journey. I stopped at least 5 or 6 people and asked them how to get to Freaksburg Road. No one knew. Then an old man sauntered toward me.

“Old timer,” I cried out. “How do I get to Freaksburg Road or Scarlet Hollow Road?”

“You a stranger, mister?”

“After dark, a lot of weird stuff happens. You might not come out alive. Like that stranger who came to town over a decade ago, a few days after a young girl got raped and killed. He looked like a genuine pervert. A mob chased him for miles and hung him high right in the center of the Scarlet Hollow Cemetery. He’s buried there too. Name was Harry Scars. His ghost remains.

“You see, the poor fellow was innocent. The girl’s rapist and killer was her stepfather. He raped another girl and bludgeoned her. But she lived and testified at the man’s trial. He’s on death row now. Stay away, young fellow.”

I trudged across Freaksburg Road; the old dirt road took me into a sinister forest. I stayed on the antediluvian road for miles. As I approached each bend in the road, I envisioned some Lovecraftian monster waiting for me on the other side, eager to rip me to shreds, devour my flesh, and drink my hot blood.

But my journey had just begun, and no predatory creatures were lurking around the bend.

Eventually, Freaksburg Road intersected Scarlet Hollow Road. I turned left. In the distance, I saw an iron gate with a sign above it—Scarlet Hollow Cemetery.

As I wandered through the cemetery, I stopped to watch a golden watch sunset.

It was dark. I took out a LED flashlight, a machete, and a .45 Magnum from my backpack. If this were my last night on earth, I was going out with thunder.

I skulked along the gravel paths from grave to grave in search of Harry Scars’ grave. I found it at the top of a hill, near a tall tree where the predators hung their prey.

In the distance, I heard creatures of the forest howling.

I switched off the flashlight. Darkness pitch-black; I couldn’t see my hands: I was a blind man. I sat near Harry’s grave and tombstone and waited in the darkness.

At midnight, my watch alarm beeped. I turned it off. I heard the howling of the wind; I felt a strong wind blow through my bones. And nearby, I heard someone screaming.

“Is that you, Harry Scars?”

“No, Jimmy,” a familiar voice cried out.

“It’s me, Jimmy. It’s your best friend Bobby, the poor fellow you murdered in the summer of 1950.”

I grabbed my .45 Magnum, clutched it, and pointed it in the direction of the other-worldly voice.

“I want you, Jimmy. You murdered me. Now, turn that gun on yourself and pull the trigger. Join me in the next world.”

“You murdered me, Jimmy,” the voice of conscience cried out.

I shot Bobby in the pitch-black coid that had enveloped me. But when I turned on my flashlight, I saw the old man I had met in town, sprawled out on the ground, covered in blood.

The old man was still breathing. He looked flummoxed and frightened. I stood over him and bent down.

“Only a joke,” he whispered.

I wiped his sweaty forehead and put some tissues on his bloody torso.

And then I shoved my .45 between his startled eyes and pulled the trigger.

With a touch of evil, I became the Midnight Satan. You see, the killer inside my head is real—my true identity. The ghost inside me that only comes out at night.

We’re all not just deviants, we’re all capable of much, much more—we all have the capabilities of murder. We also have the capacity for joy. So how many of us joyously murder while howling at the midnight moon? – Tyler Malone

A bit about Mel:

Dr. Mel Waldman is a licensed New York State psychologist and a candidate in Psychoanalysis at the Center for Modern Psychoanalytic Studies (CMPS). He is also a poet, writer, artist, and singer/songwriter. After 9/11, he wrote 4 songs, including “Our Song,” which addresses the tragedy. His stories have appeared in numerous literary reviews and commercial magazines including AUDIENCE, HAPPY, SWEET ANNIE PRESS, POETICA, CHILDREN, CHURCHES AND DADDIES and DOWN IN THE DIRT (SCARS PUBLICATIONS), PBW, NEW THOUGHT JOURNAL, THE BROOKLYN LITERARY REVIEW, HARDBOILED, HARDBOILED DETECTIVE, DETECTIVE STORY MAGAZINE, ESPIONAGE, and THE SAINT. He is a past winner of the literary GRADIVA AWARD in Psychoanalysis and was nominated for a PUSHCART PRIZE in literature. Periodically, he has given poetry and prose readings and has appeared on national T.V. and cable T.V. He is a member of Mystery Writers of America, Private Eye Writers of America, American Mensa, Ltd., and the American Psychological Association. He is currently working on a mystery novel inspired by Freud’s case studies. Who Killed the Heartbreak Kid?, a mystery novel, was published by iUniverse in February 2006. It can be purchased at iuniverse.com, bn.com, at amazon.com, and other online bookstores or through local bookstores. Some of his poems have appeared online in THE JERUSALEM POST. Dark Soul of the Millennium, a collection of plays and poetry, was published by World Audience, Inc. in January 2007. It can be purchased at worldaudience.org, bn.com, at amazon.com, and other online bookstores or through local bookstores. A 7-volume short story collection was published by World Audience, Inc. in May 2007 and can also be purchased online at the above-mentioned sites. I AM A JEW, a book in which Dr. Waldman examines his Jewish identity through memoir, essays, short stories, poetry, and plays, was published by World Audience, Inc. in January 2008.