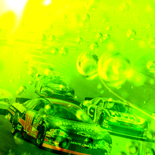 Some bitches don’t know when to quit. Or maybe most bitches. Was there ever a bitch that wasn’t a bitch? Somebody oughta research it. Cassie, the biggest bitch of all, is still here in his trailer still screaming some stupid shit about some stupid shit. Seriously what he’d really like to do is he would like to clobber her with an armadillo. Oh yeah would he ever. Bitch would bleed like a colander and topple right down.

Finally she is turning to go and he can get back to some peace and NASCAR but then what the fuck! What’s this stupid shit? Before the slut closes the door she grabs out some goo from her pits and throws it on the cringing couch. The jumpy slime spreads itself across the cushions. He leaps up but then it scrams up onto him. Fucking hell!

Except it smells kinda good doesn’t it? He leans down to sniff it. The goo buckles. Damn it does smell good! No kidding, it is a tang worthy of shoe-boxing and taking out every five or six seconds to sniff. Which is what he does.

Two years later he still hasn’t left his trailer. Sometimes he saunters himself out of bed to watch some racing but mostly he lies there huffing and licking the goo the bitch gave him. It’s the smell of woodsy days and gooey nights.

He thinks of Cassie sometimes. Often he had wished that her bottling eyes green-seeming but actually argyle would close forever. But no more. Chick did him a solid. Actually he feels pretty sing-song about everyone these days. He suspects though that his parents would scrape him with razors if he returned and actually he is right about this.

In time he turns off the TV and puts the goo back in the shoebox and completes an online college degree in Sociology. Next is the Peace Corps. Thailand is a difficult place but after a year or so he is enjoying it like pick-up sticks. He tries to keep his mind on the work and off the hot sweaty sun and the hot sweaty local women. But the women are tugging him in and before long he is fucking one of them fucking her stupid fucking her until she passes out practically. Strangely he falls in love with her but she won’t affix him or even let him fuck her anymore after he declares himself. He misses his mother sometimes but mostly he misses the goo which for some reason he thought he didn’t need any more and which he had put in storage before he left America.

When his stint is up he comes home and leaps over straight to storage. He removes the shoebox lid to find that the goo has changed. It is like fetus chunks at first but then it transforms into gooey golden butterflies that flap themselves out of the storage garage and fly up and up as if to rendezvous with the sun itself. Damn! Pretty fucked up.

He walks to the park and sits on a bench to commandeer the scenery. When Cassie happens by he is surprised but not as much as he woulda thought. They reminisce like pets and he asks if she has any more goo but she says her body outgrew growing it. She smells like sudsy dishes and he wants to fuck her but he knows it is too late for that so he just shrugs goodbye. He reflects that she’ll probably kill him one day but in fact it will be sooner than that. He sighs. The sun shines like spears. He needs a job.

We’re all hobos screaming “Change!” but we rarely do anything about it. We’re happy with pocket lint as we wait for nature, going along with that feels natural to us: changeless stagnation. – Tyler Malone