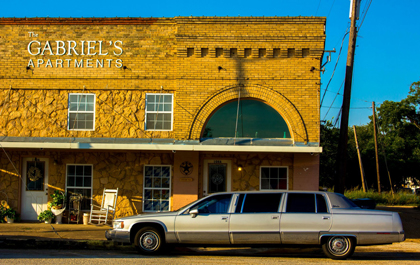 A friend of mine had once advised me to refrain from making friends with my neighbors. This advice proved to be useful, but had I followed through with it, I would not be writing this. At the time I was naive, and thought nothing of a friendly chat with the neighbor next to whom I had just moved. I lived on the corner of Leffingwell and Carriage where I occupied a room in an apartment building. I had a single neighbor to my right, two neighbors above, and a heavily wooded forest to my rear. What initially drew me to the place was the beautiful garden just outside of the building. It was wonderfully tended to by the neighbor to my right.

His name was Frank. He was a rather soft spoken individual: an odd and off-beat character who thoroughly rubbed me the wrong way. He had a problem keeping to himself. In fact, his invasive demeanor eventually left me a prisoner in my own home. I found myself quickly drawing the shades at the slightest sound of an opening door. I did anything to avoid being social with the neighbor that always seemed to sniff around my business. Considering he lived only a hallways length away, I still desperately avoided the inevitable because when chance permitted us to cross paths. I shuddered at the very concept of a lengthy conversation with the guy. He ranted and blathered about things that I couldn’t give the slightest shit about, and often informed me, in a sorrowed tone, that the couple who previously rented my room, had disappeared without a trace. Many investigations took place, and their names were plastered all over the evening news. Nothing turned up. They seemed to have fallen off the face of the earth, and he would tell me as if to express his grief, but he only further creeped me out. He went on about how he felt continually compelled to call the authorities regarding the sound of domestic disputes, and further elaborated on the media’s theory of murder, despite the lack of evidence.

The potential murder of the missing couple explained why the rent was so cheap, and why the landlord hadn’t bothered to check the bad credit that came with my name, but I foresaw no problems when first moving in. I never even formally met the neighbors above me: only a silent nod and wave when in passing, but Frank stopped by on a day-to-day basis. It seemed as if he watched from his window, and waited for me to step outside for a smoke. He ultimately made himself comfortable with the irrational idea that we were friends. That was what provoked me, and I became a recluse. When I stopped answering the door, he eventually stopped knocking, and I was then rarely seen sitting outside, but I knew he waited. I knew he watched. When I was out of food, beer, and cigarettes, I sat by the living room window, and strategically planned an escape to my car to avoid having to hear the beckoning sound of his voice. I was always unsuccessful.

Perhaps I was being unreasonable. Was it was possible that he was merely a lonely guy looking for someone with which to shoot the shit? Even if it was, I wasn’t interested. Especially when, night after night, I was startled by strange sounds that came through the walls. It sounded like grinding or sawing, accompanied by bouts of loud clanking. Make a complaint, I told myself, but procrastinated due to the fact that I didn’t want his trouble. Especially when I was toying with the idea that the previous tenants were tortured and brutally murdered before being buried beneath the garden. I tried to disregard the thought as much as possible, and considered that there were only three more months until the end of my contract, and I could pack up and take myself elsewhere.

I did just that. When my lease expired, I fled the apartment. It wasn’t until a year had past that I thought of Frank. I was rotting in front of the tube when a news flash had captured my complete attention. Though my eyes were peeled, I wasn’t the least bit shocked to hear the reporter reveal a mass murder scene at a building on the corner of Leffingwell and Carriage. The authorities had exposed the remains of many victims. The bones were dug up from the garden I had once admired, for its flowers flourished beautifully beneath the early summer sun. I sat back and uttered a sigh of relief.

We really enjoy those we don’t know anything about: celebrities, sports stars, strangers with large chests on beer billboards. There are more Franks in the world than we want to realize, though, even the ones we see on TV. Everyone is a little deviant, most have the simple potential for murder, like a lone crow on a power line. Remember to say Hi! to that sweet lady sitting alone on her porch next door, but don’t forget to lock your door when you get home. – Tyler Malone