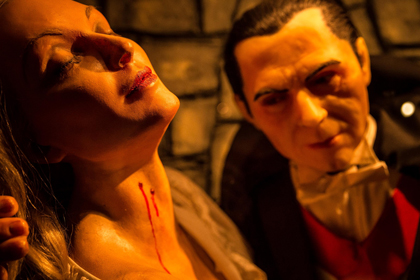 In was the summer of 1963. We lived on the fifth floor of a high rise in Sunnyside, Queens, close to the cemetery where my relatives were buried, the Queensboro Bridge, and the EL tracks. Our terrace had a view of the large water tanks by the river, and a great big bakery billboard. It was heaven.

Though I didn’t like the subway very much, (there had been an incident in which I’d been left on the platform) and my sister and two brothers teased me mercilessly, I loved going for 5 cent egg creams at the sweet shop, skating around the block with the skate key bouncing on a string against my chest. We played chicken with our baby doll carriages, and later, when they got smashed beyond repair, with shopping carts. My brothers played stick ball in the street and threw firecrackers off the building rooftop.

I remember one time, after my fear of subways had abated somewhat, that we walked to the EL, screaming underneath it, and our voices echoed and made us laugh. Then my brothers started describing the movie we were going to see The Seven Voyages of Sindbad. Oh, the monsters that chewed up sailors, and how the swords would slice through bodies, how sea monsters would rise from the ocean and swallow the boats whole. I got frightened, as they knew I would, and ran home. They used my ticket and candy money to buy more snacks for themselves. I guess they must have thought the movie would be worth the beatings they got when they came home. I sat in my bedroom listening to the slaps and screams, silently smiling.

I did not like horror movies, and to this day I still don’t. All my sister had to do to get me diving under the covers at night was simply hum the music intro for Alfred Hitchcock Presents… I don’t know why “Dance of the Marionettes” scared me so, but it did. I was easily frightened, I suppose.

That being the case, Friday nights found me anywhere but the living room, where my brothers and sister were glued to Chiller Theater. Frankenstein, Wolfman, Dracula, the Creature from the Black Lagoon, all growling, moaning and walking sinister on the TV screen. Sometimes just glancing at the screen on the way to the bathroom would be good for at least one evening’s nightmare.

So I sat on the terrace with my mother and listened to the music on her transistor radio. She always listened to NBC Radio with “The Good Guys.” The Beach Boys, Jan and Dean, Sukyaki, Easier said than Done. Great songs I still remember the words to. (Okay, not Sukyaki, that was in Japanese, but the other ones.) And we talked, my mother and I, about things a six year old would be interested in. I don’t remember just what those things were anymore, but I do remember one thing. For those few months, I had my mother all to myself.

And this was a different Mom. Not the harried, wicked witch Mom who would scream and latch out because she simply couldn’t handle four kids all day long, seven days a week, usually with no support. In all the years I was growing up, I remember maybe two or three friends of hers that ever came to our house. And she never went out without us. The only time I remember waking up without her being there was when she got sick and had to be hospitalized. Then we were parceled out to stay with relatives until she recuperated. But those Friday nights, she was relaxed: she laughed and hugged me. I think I had actually forgotten what being hugged by your mother was like.

Maybe by that time in my mother’s life she had already been beaten down. I know now that her life wasn’t easy. She was born what they called then “a-change-of-life-baby,” and the only one of nine kids born in Canada. These days she probably wouldn’t have been born, as I probably would not have been. My mother would have been on birth control; her mother would have gotten an abortion. But there she was. Her youngest sister was at least 10 years older than her. I really don’t think my grandmother had much use for her. And my grandfather died when she was young. I never knew much more about her childhood because she would never talk about it. I had heard about her brother Mike in whispered conversations much later on.

But for three months in the summer of 1963, she was normal. At least on Friday nights. Now I look back and remember Chiller Theater fondly. I still don’t like horror movies. But I did love my mother then. For three months I had her as she should have been. We moved to New Jersey soon after and I don’t remember ever seeing the mother she was that summer ever again. I saw flashes now and again, but just for brief seconds. The woman of that one three month stretch was essentially gone.

These are the things we hope children don’t see and remember forever: flashes of humanity, of anger, and who we once were. Children chew but they never spit out. They hold onto something, remembering the texture, the taste, and the experience. Mostly, though, they remember the horror. – Tyler Malone

Rose Aiello Morales is the author of "If You Find Zen on the Side of the Road, Don't Tell Buddha" Available on Amazon.com and BarnesandNoble.com.