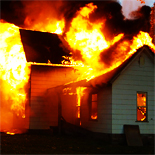 There were three of them.

They lived down the street on the opposite corner – father, mother, daughter.

They lived in the suburbs and their daughter grew up.

Her name was Mary.

Mary Beth, really, but the boys in the neighborhood shortened it.

This seems ironic now, because her name had a mere three syllables. We were young then, I was fifteen and Mary fourteen. It was the summer of ’82 and Graceland, the home of Elvis, had just opened to the public.

Graceland symbolized a different kind of house, extravagant, sexy, fun. It had a royal-blue-and-white living room, complete with a limousine-sized couch.

Mary’s house was yellowed, stale, her couch ordinary-crusty-brown, like a parched lot in the desert. You couldn’t give it away, the house, couch, our lives. It didn’t bother me. It bothered Mary’s mother.

She wanted to be Priscilla.

There was a knock. She opened.

At 37, she opened her door to a god. In fact he looked a lot like Elvis, the young version: bored, oversexed. He delivered groceries for the corner market.

Tossing an empty sack over some pomegranates rinds, he bedded her there, on the stained counter. Patience was definitely not his virtue. He climaxed within minutes.

That was not the end. Mary wanted it to be.

Our parents watched behind large picture windows as if they had a right to view other people’s intimacies. The men stayed up late hoping to remember what sex was like before they had their soft doughboy bellies, a time when the mere thought of lying skin to skin against their wives made them hot and desperate. Now they were desperate to remember sex at all. People grew restless. Their restlessness boiled over and scorched Mary.

All it took was a phone call.

Mary’s father was in the military. She saw him infrequently. I saw him even less. We all heard him that day, the afternoon he tattooed their driveway with the treads of his oversized Goodyear tires.

He’d burst through the front door, bronzed, constant, proud, then crumbled on the rug when he found them; his wife, her lover, rocking—waltzing in the kitchen among the half opened boxes of cereal. He’d hated himself then, knowing he’d neglected to feed her for some time.

A few minutes later, he left, forfeiting his marriage and Mary to her lover.

“It is a matter of principal,” he’d say, ignoring the emptiness.

For sixteen years he’d held the prize, a wondrous gift, and he’d let it slip away. Too angry to forgive, he was left only with snapshots.

I tell you this now out of guilt.

Mary was not ordinary. She was tall-lush-luxurious, a blessed child, no need to hoard love under the bed. But it troubled her when the boys abbreviated her name, made her feel abridged, filling her lungs with lead. Too heavy to fly when the river of men invaded her home, Mary retreated to a small gray concrete porch. She sat there for hours wearing cutoffs, thin legs perched precariously at the edge. It was while watching her that I glimpsed her fragile eggshell surface. Soon after, everything changed.

She had Marilyn Monroe’s vulnerability and sexuality.

The boys could not resist.

She wanted to be famous.

I wanted to write her book, exploit the beauty of her spirit, so I kept a vigil, peering through the trees that blanketed the left side of her house, memorizing the details of her day. Sometimes she would talk to me, but I was no better than the rest of them. I did nothing to clear the lead from her lungs because I needed her. We all did.

We were all voyeurs that year. As readers, you realize this by now, so you won’t be shocked when I tell you that most of us watched. We watched lose her virginity with the high school quarterback.

It happened like this: Mary posed seductively under the Jacarandas and palms that lined the front lawn. She pulled down on her top, exposing just a little of her soft white skin. Then she laughed, falling down into the grass. Once there she reached out towards, but never touching his hard center. The 96-degree air exploded.

A small crowd gathered. Mary stripped down slowly, ending up in a tiny white string bikini. Then she danced a dance that I had never seen before, one that I had hardly dared to imagine. It was full of lust and hunger. It did not belong to Mary. She felt no shame, stripping down to bare skin before she’d let the stranger bounce on her soul.

I saw her eyes. They were wide and blank. She didn’t care. It didn’t matter that she was exposed to us or that we could see right through to her marshmallow cream center. She’d learned this from her mother.

I was afraid for Mary.

Her mother was a wildfire, out of control. I knew this. I saw the men that frequented the unlocked back door.

Mary told me she did not love anyone. I believed her because I’d seen her grow up in the gap, the space between one silent word and another. I knew she desperately needed to be a part of something-anything, a neighborhood—a cultish community, glued together like the dark red nail polish, dripped-dried on the white bathroom tile, a messy blob of circumstance reborn.

Mary dreamt of Graceland, but she awoke every morning in a wasteland, terrified that life was just an endless cycle of swinging doors. She wanted something permanent.

Then I saw her crying, alone in the yard, cradling her despair.

Her mother was in the kitchen, too busy to notice.

A short time later a vortex consumed everything.

The hero worship we love to love, those unrealistic passions modeled after our love of other star-studded people, will burn our wings. But when we fall, we don’t just destroy ourselves: there will be a crater that sucks the life out everything that, for one reason or another, stupidly loves to love us. – Tyler Malone

I've had a varied career as a writer, first working at the L.A. Weekly as an assistant music editor to Mikal Gilmore, (Now writer for Rolling Stone among other publications) then detouring with family before going on to earn two degrees, my most recent one a MFA in Writing from CalArts (The school that Disney founded). While there I had the privilege of learning from some of the most amazing voices of our times: Nicole Panter, Susan Compo, and Peter Gadol, to name a few. Through the years I've published articles in Keynoter Magazine, as well as fiction in National Doll Magazine, Both Sides Now, and poetry in The Pub (Ansuda Press), Lifeline, Up Against A Wall Mother and Mad Swirl. I've also written, directed and produced a play, “The Boy Who Was All Used Up” for The Road Theater Company in North Hollywood. The play dealt with a family’s perception of mental illness and was well received. In June of 2005, the fourth chapter of Scent-i-mental Over You, my most recent book, was published by the University of Arkansas Press. I've also edited a memoir about a man with Muscular Dystrophy, taught poetry to inner city teens and taught animation to K- 6th graders. I am listed in Directory of American Poets and Fiction Writers, The American Copy Editor Society, and SCBWI (Society of Children Book Writers and Illustrators.) I am currently working on a book about the murder of an artist in Los Angeles. "I love the passion/insanity that goes along with creating something out of nothing."

Sheree on the www:
Poets & Writers
Scent-imental Over You